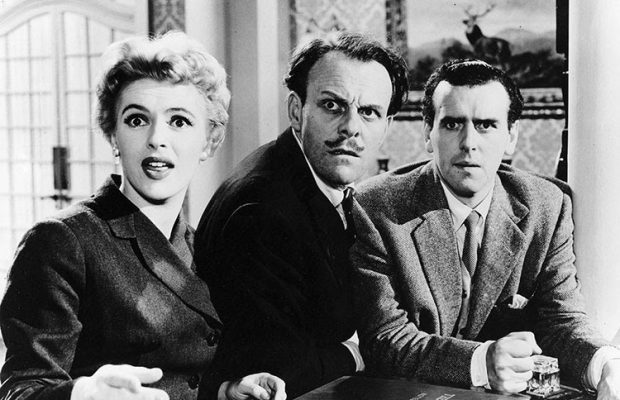 Toronto Film Society presented The Green Man (1956) on Sunday, January 8, 1989 in a double bill with The Wrong Box as part of the Season 41 Sunday Afternoon Film Buffs Series “B”, Programme 4.

As a film The Green Man seems to have improved on the stage original which apparently had just a short run.  Frank Launder and Sidney Gilliat, the writer-roducing team of such delights as The Happiest Days of Your Life, Folly To Be Wise, The Belles of St. Trinian’s and Wee Geordie (all, you will note, with the delightful Mr. Sim), have made The Green Man an amusing mixture of farce and drama that should bring a smile to everyone’s face. 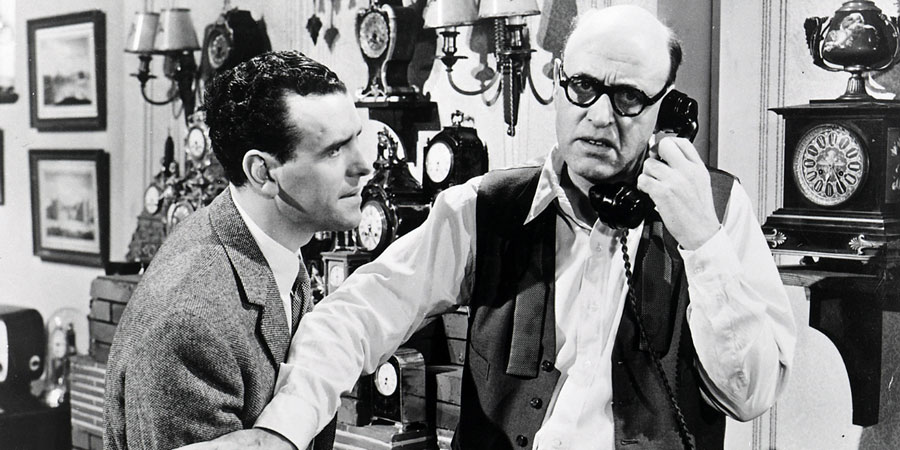 The film’s title does not refer to Mr. Sim, our villain, but to an inn, where the principals of the film meet, with hilarious results.  Following his great success in The Ladykillers the previous year, Mr. Sim again takes on the role of villainy with gusto.  The opening scenes of his colleges days, to manhood as a hired assassin, delineate his characterization most effectively.  He fully exploits his rich, genial personality while outwardly operating as a clock-maker and secretly flitting from victim to victim, as necessity arises, enjoying every phase of his task.  His latest job, and the subject of today’s film, is to blow up an important public figure who is having a secret tryst before leaving for an important Far East trade mission.  George Cole, as a vacuum salesman, stumbles on the body of the VIP’s secretary whose suspicions proved her undoing.  She recovers sufficiently to give a clue to her employer’s hideout and the hunt is on!

Literally working against the clock, George Cole nearly wrecks the joint looking for the deadly contraption.  Through it all, Mr. Sim strides grotesquely, peering wistfully on his seeming doom or brightening bravely with gleeful assurance when his mind suddenly sees a way around.  And so he comes finally to the Green Man, to an archly suspicious mine-host, to an all female string ensemble and to 10:28 p.m., the appointed time for the dispatch of the victim.

Naturally, many laughs arise from Mr. Sim’s unctuous villainy and his arch expression of humility when coping with the ladies.  Long-faced and tombstone-toothed, this wonderful Scottish-born character actor delighted millions of moviegoers with his expressions of ghoulish glee, doleful dithering and agonized anguish, coupled with uniquely gurgling diction, which were associated with much that was best in British comedies and comedy thrillers from the late thirties to the early sixties.  His film appearances after that were spotty, a highlight being the befuddled bishop in the hilarious black comedy The Ruling Class (1972).  George Cole, who began his career in straight roles, later specialized in shy, young bachelors who were all thumbs with girls and life in general.  He was very popular in fifties’ comedies and is perfectly cast in today’s film as he veers from timidity as a new salesman to near panic when involved in imminent murder.  Come join them at the Green Man.  You won’t be disappointed.