Toronto Film Society presented The Horse Soldiers (1959) on Sunday, December 19, 1982 in a double bill with Mad About Music as part of the Season 35 Sunday Afternoon Film Buffs Series “A”, Programme 4. 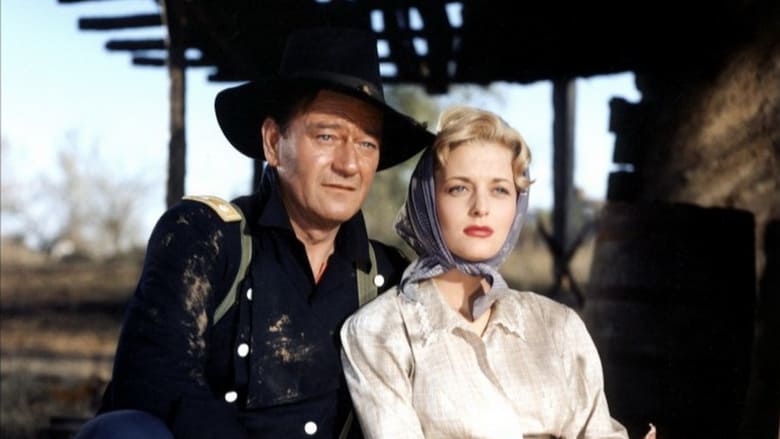 The bad news about this afternoon’s print of The Horse Soldiers is that it is in DeLuxe Color, meaning that the print is, in all probability, a pinkish-red in colour.  This is not the way the film looked when it first came out, or even a few years after initial release.  All colour processes other than 3-Strip Technicolor (the dominant colour process from 1935 to 1955), and some post 1955 to early 1970s Technicolor, faded after only a few years.  DeLuxe Color was printed on Eastmancolor film by DeLuxe process–ensuring one of the worst post-release records of colour survival.  When we last viewed the film in 1975, only the cadets’ march retained any colour fidelity, yet even that sequence may be deteriorated by now.  Why, then, are we showing this film?  Well, it is a late, generally neglected genre film by the greatest director in film history, John Ford.  We delayed screening this film the past few years because of the colour problems, but now figured that no good print would ever return to Canada, and the film merited serious revival.  Perhaps one should look on this print as a pinkish, tinted black&white film.  The images are still sharp, and the soundtrack is good.

Despite the colour problems of this print, The Horse Soldiers can still be appreciated for its superb photographic composition–note the shots of a single line of cavalry riding by a lake; the final scenes of departure between Wayne and Holden; the scene of Wayne riding away from Towers, shot through a cabin doorway as were several memorable sequences in The Searchers.  And, The Horse Soldiers can also be enjoyed for its soundtrack–the album was played before this afternoon’s first film.  Ford employed recurring themes and melodies throughout his film career, no matter who the composer or arranger was.  The litlting Civil War song, Lorena, arranged by David Buttolph, which was the third track played during the intermission music, appears a coule of times in The Horse Soldiers; yet it is also the love music that haunts The Searchers, that greatest of all Westerns, arranged by Max Steiner.  Similarly, Ford’s use of the Ann Rutledge theme from Alfred Newman’s score of Young Mr. Lincoln in 1939 reappeared in 1962’s The Man Who Shot Liberty Vallance, to be shown on our Monday Buff Series in February.

Of the story of The Horses Soldiers itself, we can only add that it was based on a true occurrence, when, in April, 1863, the U.S. Cavalry went on a raid deep behind the Confederate lines to create havoc and disturb morale.  It was Ford’s only full-fledged Civil War feature film.