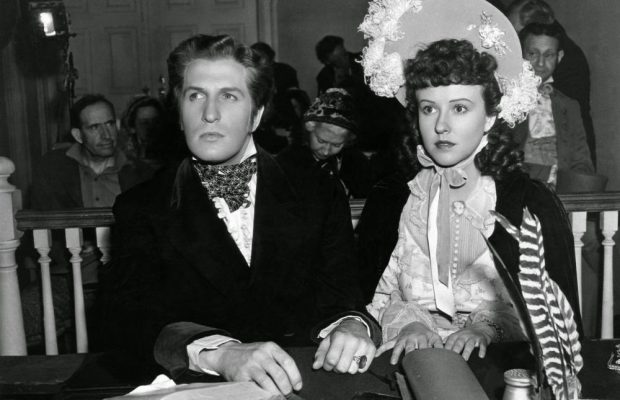 Toronto Film Society presented The House of Seven Gables (1940) on Sunday, February 5, 1989 in a double bill with Cast a Dark Shadow as part of the Season 41 Sunday Afternoon Film Buffs Series “B”, Programme 5.

PROGRAMME CHANGE!!  YOU MAY RECALL, BACK ON OCTOBER 23, 1988 WE SCHEDULED A DOUBLE BILL OF IVY AND DOUBLE DOOR.  AT THAT TIME, THE FILM DISTRIBUTOR SENT US A PRINT OF DOUBLE INDEMNITY IN ERROR (WHICH DID FIT VERY WELL INTO OUR SERIES).  HOWEVER, WE FELT WE SHOULD STAY WITH FILMS WE HAD PUBLICIZED, SO WE HAVE MOVED CAST A DARK SHADOW UP TO OCTOBER 23RD AND RESCHEDULED DOUBLE DOOR FOR TODAY, REPLACING CAST A DARK SHADOW.  DOUBLE DOOR WILL BE OUR FIRST FEATURE.

UNFORTUNATELY, TODAY’S SECOND SCHEDULED FILM, THE MAN I MARRIED, WAS NOT SHIPPED TO US AND MAY BE UNAVAILABLE!  RATHER THAN DO ANY MORE RESHUFFLING OF PROGRAMMES, WE HAVE BOOKED A SUBSTITUTE FILM, THE HOUSE OF SEVEN GABLES, WHICH WE THINK YOU WILL ENJOY.  IT FITS QUITE WELL INTO THE SERIES DUE TO GEORGE SANDERS LONG AND DISTINGUISHED CAREER AS A PERFECT ROTTER!

WE DEEPLY APOLOGIZE FOR ANY DISAPPOINTMENT CAUSED BY THE CHANGES.

“The film version of Nathaniel Hawthorne’s American classic, highlighted by Joe May’s European technique on the direction side, is lifted far above its modest budget classification in both production artistry and merit.  …Picture gets off to an impressive and promising start (and)…despite some slow passages at the halfway mark, The House of Seven Gables will slip by most acceptably…

Picture focuses attention on the performance of Margaret Lindsay, who impresses with characterization that spans a 20-year period.  Miss Lindsay injects both sympathy and sincerity in the difficult role of the girl who waits for her betrothed to emerge from prison, after being wrongly convicted.  It’s a highlight performance…

The Hawthorne story is a familiar one in early American literature.  The Pyncheon family lives under a curse, and Vincent Price does not escape when he is charged by his mercenary, ambitious brother with the murder of their father.  Convicted, Price serves a long sentence while his betrothed cousin, Miss Lindsay, who inherited the house, lives and suffers through the years awaiting his eventual release.  The romantic tragedy is dissipated in the climax when Sanders is the victim of the curse, and the romantic pair happily pick up where they left off years before.

Under May’s capable direction, every member of the cast delivers a top performance.  Sanders is excellent as the ambitious, money-grubbing brother; Price clicks as the musical dreamer; Nan Grey and Dick Foran make a fine romantic team; and Cecil Kellaway stands out as Price’s attorney friend down the years.

Settings are completely set up to provide early 19th century atmosphere, with low-key lighting of Milton Krasner accentuating the dramatics of the piece.” 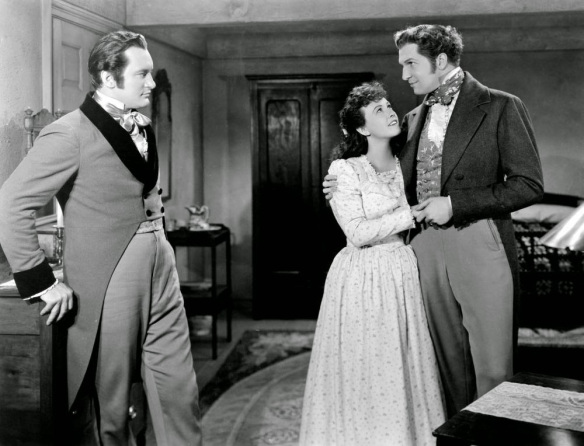 Most contemporary reviews of the film were not as kind as Variety.  But, interestingly enough, current reviewers rate it quite highly.  Leonard Maltin’s TV Movies says it is a “Good adaptation of Hawthorne’s classic novel….  Fine performances” and gives it three stars out of a possible four star rating.

Steven Scheuer’s Movies on TV goes even further, giving it three-and-a-half stars and declaring it “Superbly acted” and echoing Maltin’s comments with “well made drama version of Hawthorne’s classic novel.”

Also, how often do you see Vincent Price in a sympathetic role, not to mention as a romantic lead?  Isn’t he more at home in The House of Wax than in The House of Seven Gables?  Judge for yourselves.