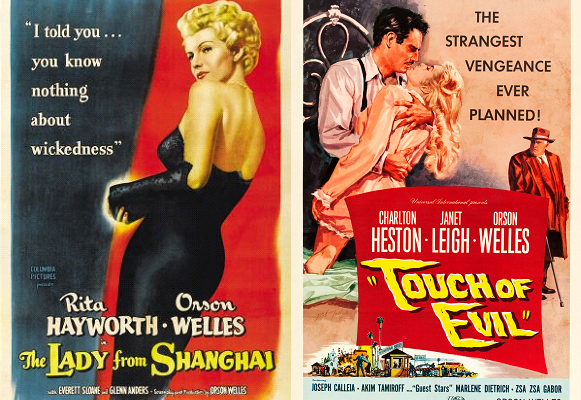 Tonight’s two films are from a master of the “film noir”, Orson Welles.  Both films are classics of the genre, but they are also very similar in background and style. 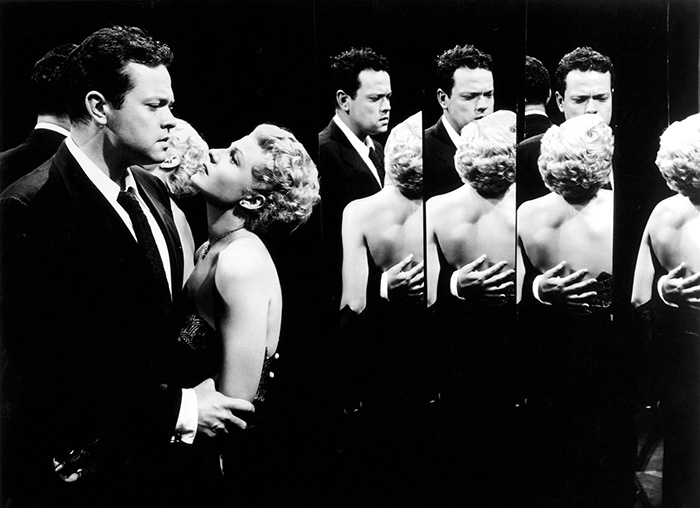 The Lady From Shanghai is filled with murderous intrigue, the story of a yachting cruise that leads to a preposterous murder design.  The exciting visual effects in the final funhouse sequence, a shootup in a hall of mirrors, displays Welles’ brilliance.

Welles never intended to direct the film.  He explains: …”I was working (with Mike Todd).  But overnight he went bankrupt and I found myself in Boston…unable to take my costumes from the station because $50,000 was due.  Without that money we couldn’t open.  At the time I was already separated from Rita; we were no longer even speaking….  From Boston I got in touch with Harry Cohn, then director of Columbia…and I said to him, “I have an extraordinary story for you if you stand me $50,000, by telegram in one hour, on account, and I will sign a contract to make it.”  Cohn asked, “What story?”  I was telephoning from the theatre box office; beside it was a pocket book display and I gave him the title of one of them: “Lady from Shanghai”.  I said to him: “Buy the novel and I’ll make the film.”  Later I read the book and it was horrible so I set myself top speed to write a story.”  (Sarris)

Welles uses his camera with careful consideration.  He had long conferences with cameraman Charles Lawton before starting the shooting.  They used low-key interior lighting and natural light sources, with few reflectors for interior scenes.  Wide-angle lenses were used for close-ups to achieve the deliberate distortion that is characteristic of the director’s style.

But the most memorable part is in the final reel.  For the funhouse sequence Welles used a 125-foot zigzag slide that ended in an 80-foot long pit and 80 late glass mirrors as well as distorted mirrors.  The scene is quite extraordinary.  Arthur and his wife, Elsa, confront each other and endless multiplications of their own likeness.

Purely in a technical sense this sequence is a “tour de force”, but it also has wider connotations.  It shows the destruction of the myth of the good-hearted heroine in American films.  Each time a mirror falls in fragments, it carries with it the face of Rita Hayworth.  Hayworth had become enshrined in Gilda, two years before.  Yet in The Lady from Shanghai Welles destroys the glamour surrounding her.  This scene was originally a reel long, but like most of the film it was re-edited, re-scored, and re-dubbed. 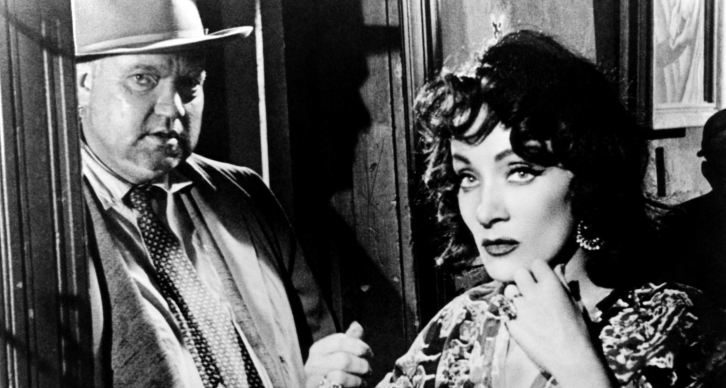 Touch of Evil may be the greatest B movie ever made.  It is the genre film of genre films.  In a plot that is deliberately confusing, full of violence and perversion, the story leads the viewer from one false clue to another.  Vargas, an inspector, tracks down the corrupt practices of Quinlan, the chief of police.  The conflict between morality and justice is lifted into a complex sphere surrounded by Bizarre characters, a shabby town and high-tension action.

As with The Lady From Shanghai, Welles never intended to direct Touch of Evil.  The producer had Welles cast in the part of Quinlan, and wanted Charlton Heston for the role of Vargas.  Heston told the producer he assumed Welles would direct the film as well as star.  As the producer did not want to annoy a big star, Welles took over the whole production and rewrote the script.

Stanley Kubrick once said that the opening shot of a picture should be the most interesting thing the audience sees after entering the theatre.  With Touch of Evil it may be the most dazzling first shot to appear in any film.  It lasts more than three minutes and displays Welles’ propensity for the moving camera and long takes, and immediately establishes the premise around which the narrative is structured.  We see a close-up of a time bomb being set and a shadowy figure running to a parked car and placing the bomb in the trunk.  Linnekar and his girlfriend emerge out of the background and drive away.  The high-craned camera travels up and back, moving with them along the streets toward the border.  The camera slowly descends as VArgas and his wife cross the street where Linnekar is stopped.  Travelling alongside and in front of the couple, the camera then cranes up again as the car moves onward.  It continues to move along, then there is a blinding explosion as the bomb goes off.

Unfortunately, Universal-International superimposed main titles over part of this shot and its fluidity is somewhat diluted.

There are several other long takes, for example those in the apartment.  They were tricky to film because of the presence of up to eight actors.  Welles has demonstrated that thte long take, as opposed to the rapid montage, allow the viewers to immerse themselves in the action.

Welles also broke convention by relying principally on an 18.5 mm lens.  The wide-angle lens provides a vision greater in range than the human eye.  The lens foreshortens and elongates perspectives by turn, thus mirroring the contortions of the action itself.

To convey the feeling of speed, the Director of Photography fixed the camera on the hood facing two men.  He used artificial lighting to shoot the day scenes, an unheard of procedure at that time in Hollywood.

Quinlan is the most memorable Welles character.  He wears limp, wide-brimmed hats, and is fond of cigars and candy bars.  With his half-closed eyes he resembles something monstrous.  And yet Welles creates a sympathetic charater  when he talks of his wife who he lost years ago, and through Tanya, an aging prostitute who he visits.

Touch of Evil had additional scenes inserted and scenes re-edited with out Welles input.

Both films tonight were largely ignored by the public.  For years after Touch of Evil was made, no American studio would touch Welles. But his contribution to the cinema remains undisputed.

NOTE:  Preceding the first film will be a short featuring Oscar Burritt, one of the founding spirits of the Toronto Film Society, and long a member of its Board of Directors, discussing the film.