Toronto Film Society presented The Lady from Shanghai (1948) on Monday, August 16, 1965 in a double bill with Macbeth as part of the Season 17 Summer Series, Programme 4. 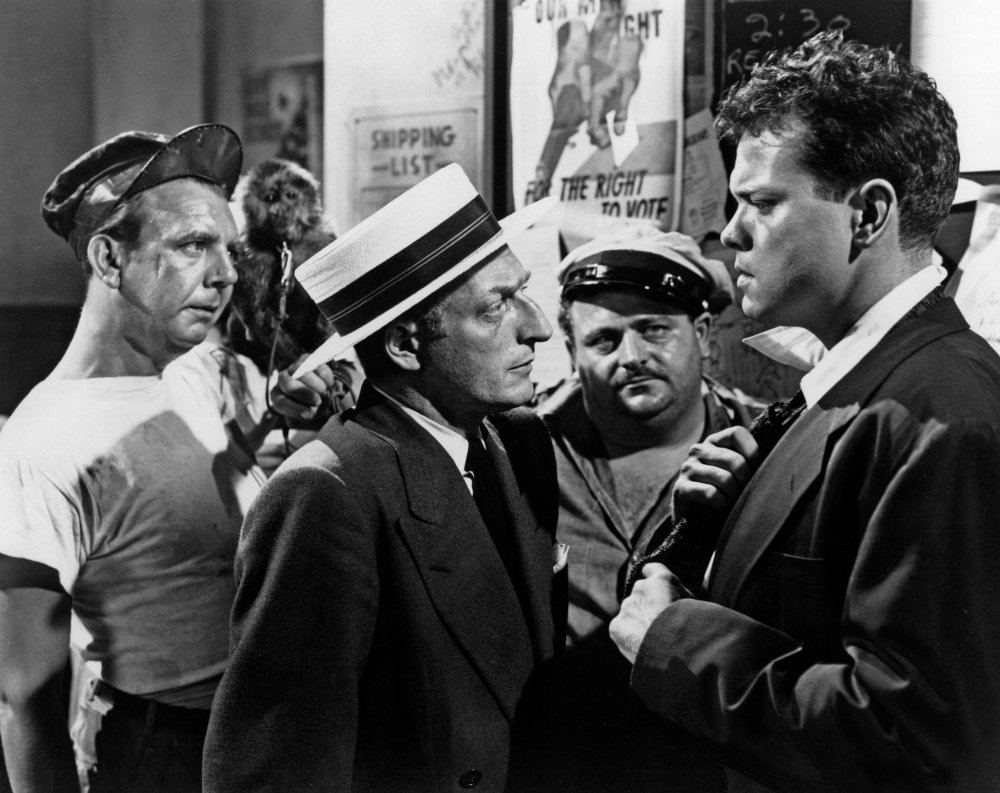 Taken an extravagantly melodramatic plot that no one has ever entirely figured out, add a repertoire of cinema effects from Orson Welles’ most bizarre bag of tricks and you have The Lady from Shanghai, which didn’t tickle the fancy of the public but has had movie-buffs talking ever since.  Apart from the directorial and camera pyrotechnics, there is some well-written dialogue and narration by the master, and one of his more restrained and most likable performances, pungently counterpointed by the flesh-creeping portrayals of evil and decadence by Everett Sloane and Glenn Anders.

Peter Bogdanovich believes the film is “even more dazzling and fluid than Kane.  Much of the editing and composition is more daring; the courtroom scene, the Chinese theatre chase, the gunfight in the Hall of Mirrors are as good as anything Welles ever made.  Thematically Shanghai begins to probe into the morality of the law, taken even further in Touch of Evil.  Bannister is a successful, wealthy and powerful criminal lawyer but is himself a criminal.  A spokesman for the law, he thinks he is above it, and this is his tragic fault.  He is a crippled spider limping through his infected world, but his love for his wife is genuine and deep, and in the end he truly kills the thing he loves.  Elsa, beautiful and fatal, conveys the quality of unconsciously perverted innocence, never quite aware of her own evil.  With Bannister’s associate Grisby, they envelop O’Hara, a basically innocent bystander, in their machinations; though he lets himself be carried along, he is in opposition or contrast to them.  ‘O’Hara is the poet and the victim’, says Welles.  ‘He represents the aristocratic, the cavalier point of view.’  O’Hara speaks for the author in his haunting, frightening, Poe-like parable of the sharks.

“Shanghai takes many sly thrusts at the judicial system, reinforcing Welles’ continuing anti-judgment motif…satiric comments on common morality and a witty parody of the American obsession with right and wrong…the subtle juxtaposition of images when the film cuts from the judge at a chessboard to an overhead shot of the deserted courtroom waiting for the jury’s return.  Shanghai is a morality play without preachment–a bizarre adventure yarn, a bravura thriller, a profound drama of decay, or all three.  Its imaginative development is unendingly inventive…the camerawork shows an abandon and freedom, a slashing, driving energy, decidedly advanced from Kane.  Though re-edited by the studio, it retains its force and impact; the script is elliptic, witty and evocative, and the images cling to the imagination.

“The Lady from Shanghai remains Welles’ wildest, most restless picture and one of his most elusively significant.  Behind the magical showmanship is the voice of a poet decrying the sin and corruption of a confused world.  And O’Hara, the victim, the innocent, has been irrevocably touched by the abyss into which he fell: ‘Maybe I’ll live so long I’ll forget her; maybe I’ll die trying’.”