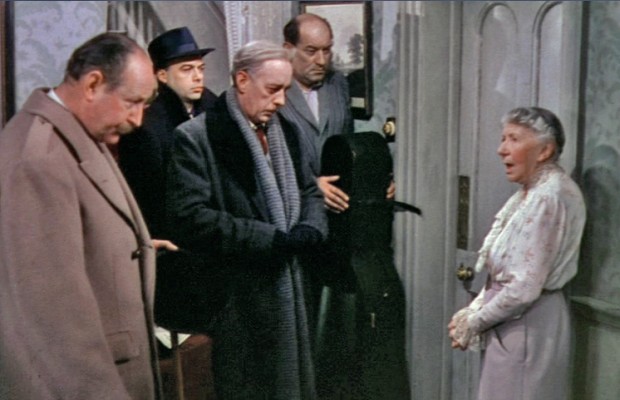 Toronto Film Society presented The Ladykillers (1955) on Monday, February 17, 1986 in a double bill with Murder He Says as part of the Season 38 Monday Evening Film Buffs Series “B”, Programme 8.

The Ladykillers, our second film of the evening, is the last in a string of renowned farcical black comedies produced by Ealing Studios in Britain under the leadership of Michael Balcon.  Between 1937 and 1959, with the aid of directors such as Robert Hamer, Alexander Mackendrick, and Charles Crichton, and such talented actors as Alec Guiness, Balcon’s films provided a showcase for British talent and set out to challenge the dominance of Hollywood over the British film market.  The most successful of all his films were the comedies.  Typically British in their irreverent, self-deprecating humour, many of these films (Passport to Pimlico, Kind Hearts and Coronets, Whiskey Galore and The Lavender Hill Mob) are recognized today as classics.  Though Balcon’s enterprise met a sad end when financial difficulties eventually forced him to sell the studio to the BBC, the work that was done at least serves to show that not all good British actors of the 40’s and 50’s lived in Hollywood.

The plot of The Ladykillers concerns an eccentric, elderly lady who rents two rooms in her ramshackle old house by the railway to a man she believes to be the leader of a group of musicians.  He is actually the leader of a gang of thieves plotting a major heist (and is played by Alec Guiness, sporting a pair of false buckteeth that would not look out-of-place on a sabre-toothed tiger).  The thieves make the old lady an unwitting accomplice to their ribbery and shortly thereafter, she discovers how she has been hoodwinked.  The thieves decide that she must be disposed of and the rest of the film revolves around their bumbling attempts to kill her.  None of them are keen on the job and in the end, they succeed only in killing each other while the old lady falls heir to their ill-gotten gains. 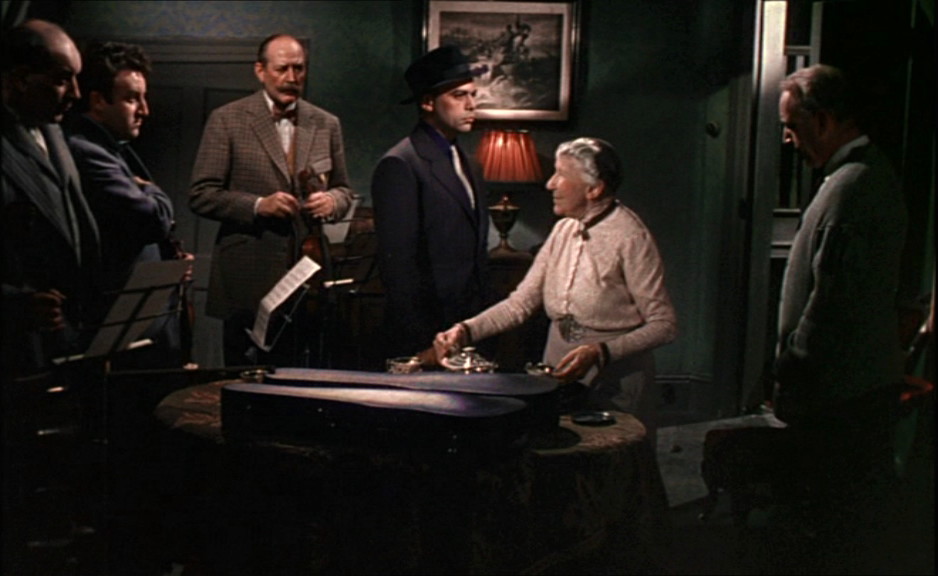 What gives The Ladykillers enduring appeal is, unquestionably, the performance of 77-year-old Katie Johnson as the eccentric old lady, Mrs. Wilberforce.  The role won her a British Film Academy Award as Best Actress, after an acting career that began on the stage at 18 and was to last until her death at the age of 79.  She steals the film right away from her fellow cast members–including even Alec Guiness.

The Ladykillers also features Peter Sellers in a surprisingly subdued feature film debut (rumour has it that large chunks of his performance were left on the cutting room floor.)  Enough is left, however, to suggest that budding talent and fertile inventiveness of a future great film comic.

William Rose’s script won the film a second British Film Academy Award and as one critic has commented: “Mackendrick’s handling of the more macabre elements in Rose’s script maintains a fairy-tale deftness that never offends or becomes distasteful.”  Another critic comments: “The setting of the oddly baleful old house isolated amid the grimy railway surroundings is eerily atmospheric, and the film is also notable for its weirdly effective lighting.”  Finally, “the gang are magnificently exaggerated types, and their interminglings with the landlady’s genteel friends are among the highspots of all the Ealing series.”  Taken all in all, an extremely enjoyable comic romp over hallowed British traditions and notions of gentility!