Toronto Film Society presented The Long Voyage Home (1940) on Sunday, September 18, 1988 in a double bill with All My Sons as part of the Season 41 Sunday Afternoon Film Buffs Series “A”, Programme 1.

By the terms of his contract with Fox, Ford was allowed to make one feature a year outside the studios.  To finance the O’Neill plays, he setup with Walter Wanger his own independent film company, Argosy–a name that harked back to rich commerce on the high seas.

Dudley Nichols wrote the script after Ford and he talked for six weeks, mulling over photos of real wharves, bars and the like.  Ford said, “We had one particularly bad break during the shooting.  In the storm scene John Wayne, playing the part of Olsen, was knocked out.  His injuries kept him laid up for a week.  But everybody in the cast did his best under the circumstances.  I rarely have trouble with actors, anyway.  Those working with me chip in with their ideas as to how to get the best effects.”  What Ford did not say in this interview was that he rarely listened to the ideas that any actor dared to chip in.  He met the refugee French director Jean Renoir shortly afterward with the dictum, “Don’t ever forget what I am going to tell you–Actors are crap.”  He meant it, even if Renoir only thought he meant bad actors.  So Ford and Nichols set the drama of a group of men opposed to an indifferent nature.  For Ford, the ocean was like the wilderness, immutable and uncaring, not like the land, which could be put in harness by the toil of the pioneers of the Mohawk Valley or the Far West.  His sailors want to believe that they may escape from the sea to the soil, but none of them do except for the golden Swede, played by John Wayne, who actually has a home waiting for his return.  Despite their illusions of a final landing the others must sign on for another dangerous voyage along with the Donkeyman, the only one of them wise enough to know that they will always go back to the sea. 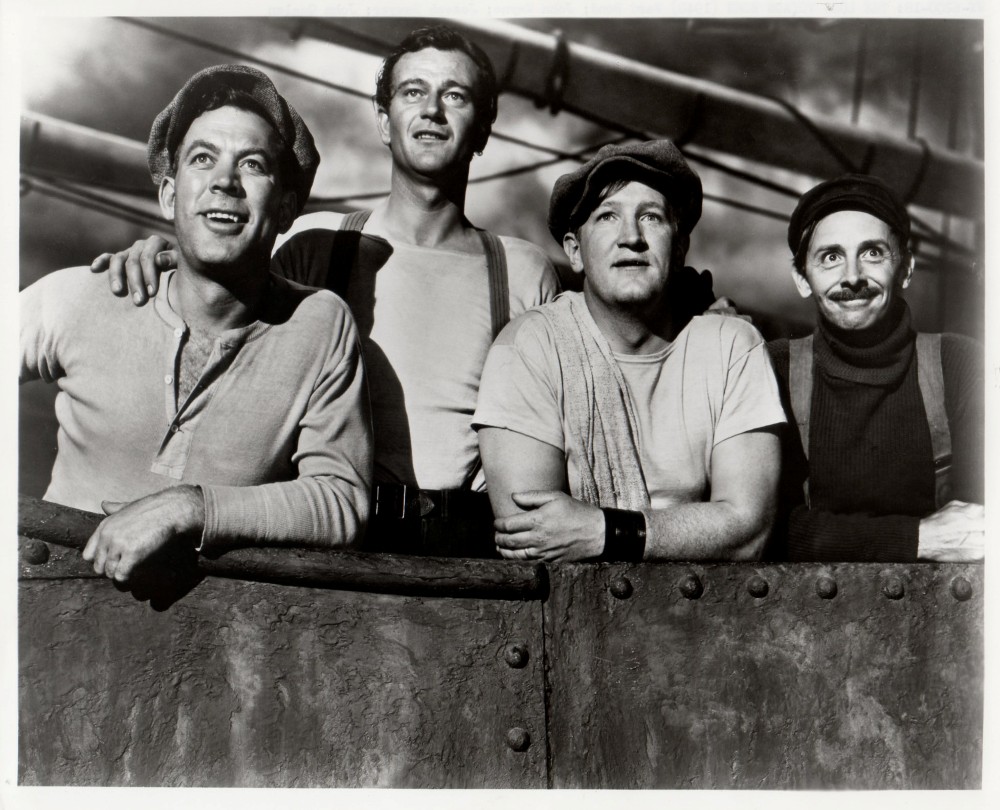 At the opening of the film the sailors leave the South American delights of brawling and sprawling with bumboat women for a trial by storm in a submarine-haunted ocean.  Ford and his cameraman Gregg Toland show the sailors as prisoners on their rusty freighter, the S.S. Glencairn, trapped between the rails and hawsers of the deck or the iron piping of their bunks below.  They suspect that a British ex-naval officer is a spy, but he is exonerated and dies heroically in an air raid on board, to be finally buried like Tom Mix, wrapped in his country’s flag–only this time Ford shows a change of heart by using the Union Jack and playing “Rule Britannia” on the soundtrack.  It is a long voyage from the strong rebel feeling of Celtic trilogy, but this time Britain was fighting Fascist oppression.

Once the ship has reached London, Ford shows that the docks are a worse trap than the freighter itself.  Pabst’s techniques of fog and chiaroscuro are used again to hide the blatant flats of studio sets, so that the sailors are snared like Gypo Nolan in a dark jail in an artificial city.  They intend to settle down and never sign on again, but they give way to the blandishments of the crimp and go to his dive and his drugged drinks and women.  They manage to get the odd Swede out, however, onto his ship for home, while they must sign on again to their inevitable doom afloat.  Already the Donkeyman has seen that the savior of the Swede has been torpedoed on another boat, and he tosses into the oily screw-churning sea the newspaper prophesying that they will go down with all hands.  The sailors have chosen the fate they have to choose.  Men who live on the unchanging sea can never change.  As the final title states: For some, the long voyage never ends.”

Ford’s film of the O’Neill plays is more brooding and powerful than The Informer, but lacks the hypnotic unity of its predecessor.  The caper with the bumboat women, the plummy heroism of the ex-naval officer, and Wayne’s uncertain Swedish accent are all exaggerated, so that the film is often unrealistic without being hallucinatory.  It is certainly eloquent and poetic and tragic, but it does not convince as a whole.  A noble failure, it did not succeed at the box office, as if they mass audience objected to its splendid simulation at the time of a real world war.

Charaters may occasionally seem like too many Gypo Nolans–dunderheads wandering in the fog, almost too stupid to be pitied–and one might feel that here, as in Ford’s next picture Tobacco Road, the fascination with lower-class simpletons typical of this period of Ford’s work is demeaning.  It is all the more miraculous, then, that the casting of Hollywood “types” like John Wayne, Ward Bond, Thomas Mitchell, Barry Fitzgerald, or John Qualen never lessens credibility nor hints at that dreadful impression of actors “playing down.”