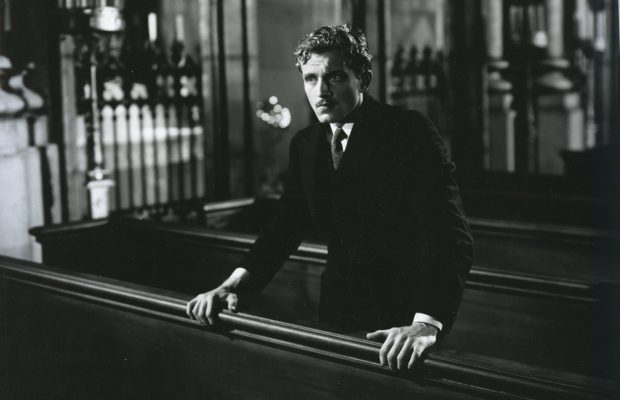 Toronto Film Society presented The Man I Killed [Broken Lullaby] (1932) on Sunday, November 8, 1987 in a double bill with Nurse Edith Cavell as part of the Season 40 Sunday Afternoon Film Buffs Series “A”, Programme 3.

At first glance, The Man I Killed is the most unusual of Lubitsch’s sound films, his one apparent attempt to answer the occasional charges that he was wasting his enormous talent on trivial material.  Yet on closer inspection, the primary difference from the surrounding works emerges as a somberness of tone with which Lubitsch never seems entirely comfortable.

The underlying dramatic conflicts of the film are actually similar to the musicals, but staked out in more explicit fashion.  The plot concerns Paul (Holmes), a young Frenchman, who had killed Walter, an equally young German soldier, in the final days of WWI.  Overcome with feelings of guilt, Paul travels to the small German town of his victim in search of the dead boy’s family.  Initially hostile, Walter’s parents and his fiancee Elsa soon accept Paul as a friend, for they mistakenly think he was Walter’s friend in life.  The rest of the town continues to be outraged by the presence of this Frenchman, but in the family he is quickly taking over the dead man’s place, even to the point of becoming engaged to Elsa.  Still overpowered by his sense of guilt, Paul tells Elsa his actual relation to Walter and wants to tell the parents as well, but she prevents him because she sees he must continue to fill the void of Walter’s absence and restore the wholeness of the family.

The story is unfurled in a poetic fashion and it has its moral–a pacifistic one–and if the pathos is stressed, there is no denying the human and truthful qualities of the simple tale.  Each sequence is fashioned with sincerity and great care.  The different scenes are all photographed with admirable artistry.  It even has its moments of light humour.  One episode dealing with small-town gossipers brings to mind something along the same line in F.W. Murnau’s old silent classic, The Last Laugh.  But aided by the microphone, Lubitsch goes his colleague one better, by adding to the prattling group the sound of tinkling doorbells.  The Man I Killed is one of those narratives that might be told in a very few words, but under Lubitsch’s guidance, each scene becomes more and more stirring. 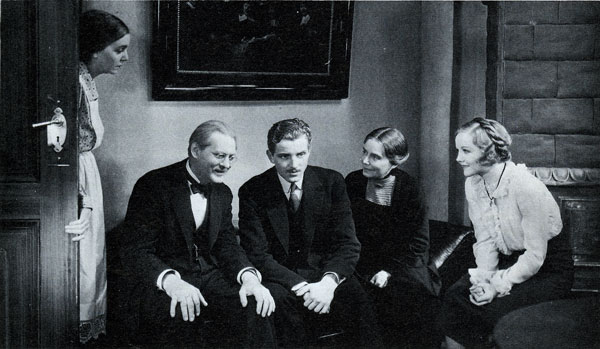 There are many satirical scenes: church bells are heard between the booming of guns and other glimpses of soldiers in a church with scabbarded swords lining the aisles.  When the uniformed men go down on their knees, one’s eyes become riveted on the spurred boots; a cannon sounds a victory boom which wakes a wounded solider in a hospital bed, and he screams in fright; gunfire over the crosses in a soldiers’ cemetery; two mothers of sons killed in the war, standing over their son’s graves, swallowing their tears and exchanging recipes for cinnamon cake.  All of this is typical of Lubitsch.  Even by the end, Dr. and Mrs. Holderlin look upon Paul with such great affection that they dread the very idea of his leaving.  The doctor argues that he and his ilk were to old to fight, but they were not too old to hate.  He emphasizes the fact that when his son left for the war, he cheered.  Irony courses through the tale to the last, when the old doctor hands his dead son’s violin to Paul, who plays a serenade while Elsa accompanies him on the piano.

Barrymore, it has been agreed by all, was superb as the German father.  However, Emil Jannings was originally scheduled for the lead, but the German actor’s failure to master English brought Lionel this great role.  Before its national release, anticipating poor box-office response to the film’s uncompromising theme, Paramount changed its title to the more romantic Broken Lullaby.

Here are some comments written at the time of this picture’s release: “It is new and daring, something the movies always fear.  It’s about war and war is a Hollywood phobia just now.  But after seeing perhaps a hundred pictures in the last year, it seemed to be the most magnificent of all–the ripened fruit of the genius of the screen’s first director,” wrote Florabel Muir in The Motion Picture Herald.  “A terrifically affecting motion picture which shows once again that of all the directors in Hollywood, Mr. Lubitsch is the finest….A film that in its humanity, quiet comprehension and the sympathy which he brings to his characterizations, has never before been equaled for effectiveness on the screen,” commented William Boehnel in The New York Telegram.  “A brilliant success, assisted by a noble and poignant idea, Lubitsch has plunged valiantly into what is essentially poetic tragedy, mixed with genuinely bitter and ironic anti-war statement, and emerged with some of the finest direction of the screen.  It is the best work Lubitsch has done in the sound-film,” wrote Richard Watts.