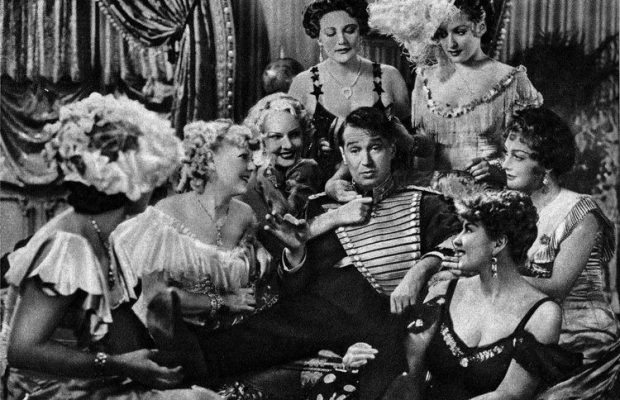 Arguably the world’s favourite operetta, The Merry Widow was first filmed as a two-reeler from Essanay in 1913, with Alma Rubens and Wallace Reid.  Next came Erich von Stroheim’s imperially decadent version in 1925 with Mae Murray and John Gilbert.  When M-G-M announced they were going to make the sound version, with no costs spared, much speculation was made about who would play the “widow”–although studio chief Thalberg had pretty well decided that issue.  Lili Pons and Vivienne Segal were interested, and Joan Crawford (!) also wanted the part.  Grace Moore desperately wanted it–“How I wanted to do that picture!  I used every art of persuasion I knew to convince Thalber that I was his ‘widow.’  He was so kind but firm.  ‘We’re probably going to sign with another singer,’ he admitted.  Finally, Thalberg told me bluntly that Lubitsch didn’t want me, was sold on another girl.  ‘I’ll do it for nothing,’ I cried.  ‘The role was made for me–for my voice!”  All to no avail.  Even Chevalier tried to convince the studio to use Moore, but then he had his reasons.  She would not get co-billing with him (Jeanette would and did), and he thought Jeanette MacDonald was too haughty.  (Probably because she didn’t fall under the spell of his Gallic charm.  She once referred to him as “the fastest derriere pincher in Hollywood”.)

However, Jeanette, at the time, was Lubitsch’s favourite leading lady.  He had already directed her in The Love Parade (1929; his first sound film), Monte Carlo (1930) and One Hour With You (1932).  Chevalier had appeared in two fo these and had also paired with Jeanette in Rouben Mamoulian’s Love Me Tonight (1932).  While no great actress, Jeanette MacDonald had a nice sense of comedy.  She was a natural–beautiful, talented and funny.  However, once she was teamed with Nelson Eddy, their lucrative pairing meant no more of her sophisticated comedy technique–her vehicles and her leading man vitiated this.

M-G-M spared no expense for their new “Widow.”  Adrian created gorgeous gowns, Lorenz Hart and Gus Kahn joined with Richard Rodgers to contribute new music, and plush art decor was supplied by Cedric Gibbons and Fredric Hope (who subsequently won Oscars).  The photographer, Oliver Marsh, was the same cameraman who had photographed von Stroheim’s Widow.  A French version (La Veuve Joyeuse) was also made, using a different supporting cast.  In the film’s trailer at that time, Franz Lehar himself appeared, conducting the combined orchestras of the Vienna Opera and the Vienna Symphony, and extolling the production.  However, the film was not a moneymaker–the original investment was too costly.

Although the script was credited to Ernst Wajda and Samson Raphaelson, it was structured and invented predominantly by Lubitsch.  According to Raphaelson, Lubitsch was “complete boss” on the set, and Thalberg had no more to do with the production than if he’d bee in Siberia.  On the marquee of Broadway’s Astor Theatre, where the film opened, Ernst Lubitsch was given equal billing with his Merry Widow.  Film critic Andrew Arris has said, “Lubitsch makes of The Merry Widow the last musical of a certain spirit and style to be made on this planet.  And it is his intimation of a genre’s mortality and the sad smile that goes with the intimation that makes Lubitsch ultimately inimitable and ineffable,” and that, indeed, says it all.