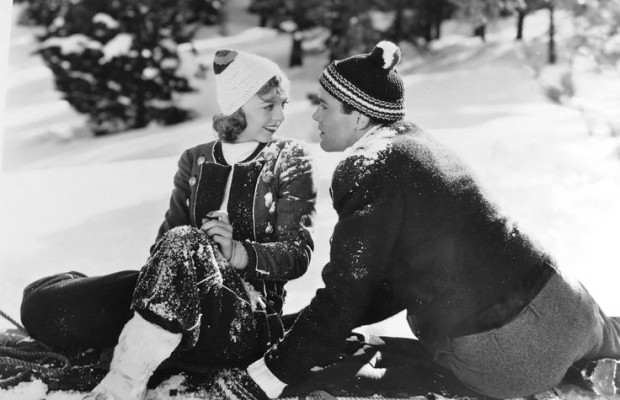 Toronto Film Society presented The Moon’s Our Home (1936) on Monday, December 13, 1976 in a double bill with My Name Is Julia Ross as part of the Season 29 Monday Evening Film Buff Series, Programme 4.

An authority on recent Faith Baldwin has assured us that the film edition of her The Moon’s Our Home is considerably more sprightly than the novel itself.  It is well, for the tale was not numbered among her best, while the picture, certainly, is about the most likable of the many screen entertainments inspired by Faith, produced in hope and not always received with charity.

Comedy romance is the heading under which the new film roughly would fall, and roughly is the way most of the comedy romance is handled.  One step more and we should call it slapstick; one step to the side and it would have been farce.  Producer Walter Wanger and his current company have had the wisdom to avoid either step; the picture stands its amiable ground, and merely bobs up and down with ingratiating animation and an occasional spout of dialogue which justifies the hiring of Dorothy Parker for the re-write job.

What we are privileged to admire is the skillful attenuation of a modest plot concerning the double-life romance between Margaret Sullavan, as the spitfire Hollywood star with a Fifth Avenue background, and Henry Fonda, a travel-story writer of the Richard Halliburton school.  Although they never have met, each has formed a not altogether unreasoning scorn of the other.  It so happens–as it always must–that they meet incognito, both having fled from their admiring public, to enjoy a comic and astonishingly short-lived honeymoon, and have a dickens of a time finding each other again because neither knows the other’s real name.

Miss Baldwin or her adapters have spiked this unimportant little concoction with half a dozen ponies of rowdy humor, and Miss Sullavan and Mr. Fonda have served it with spirit and zest.

We recommend the scene in which Miss Sullavan takes a header on skis and agrees to marry Mr. Fonda if she cannot stand unaided.  (She loses.)  We enjoyed, too, the marriage ceremony before a deaf justice of the peace, with both parties arguing bitterly and their irrelevant ‘I do’s’ coinciding perfectly with the formal questions asked by the justice.  And, above all, we endorse that moment of their wedding night when Mr. Fonda, about to embrace his bride, is suddenly assailed by the scent of her perfume–musk always makes him deathly sick.  In the contemplation of such enjoyable bits one can forgive many things–even the boy meets girl, loses girl formula.

At the time of its release, The Moon’s Our Home was well-received but there were so many gay, slightly screwball, comedies of its type in those days that it didn’t get as much attention as it perhaps deserved.  Too, it was adapted from a Faith Baldwin novel and Miss Baldwin, no matter how prolific and well-selling, was hardly a favorite of the critics.

And, of course, the very casting of Henry Fonda and Margaret Sullavan together gave the picture a publicity angle that rather obscured the fact that they were also delightfully right for the roles of the tempestuous movie star (who might have been modeled after Katharine Hepburn) and the adventurer-writer (a Richard Halliburton type).  For Sullavan and Fonda were the first romantic movie team to win a great deal of attention from the fact that they had once, in real life, briefly been man and wife…

The Moon’s Our Home was a highly enjoyable trifle about a couple of world-famed celebrities who meet, fall in love and marry, even though neither realizes who the other is.  To Miss Baldwin’s credit, she provided the original story line which was considerably helped by a bright screen play by Isabel Dawn and Boyce DeGaw and, undoubtedly, by the ‘additional dialogue’ supplied by Dorothy parker and Alan Campbell.  Sullavan and Fonda, both of them much more familiar in much more serious things, were extremely bright and attractive with sparkling comedy senses.  Charles Butterworth contributed one of his funnier bits.  And some of the most competent character actresses on the screen–Beulah Bondi, Henrietta Crosman, Margaret Hamilton, Dorothy Stickney–helped a great deal, too.