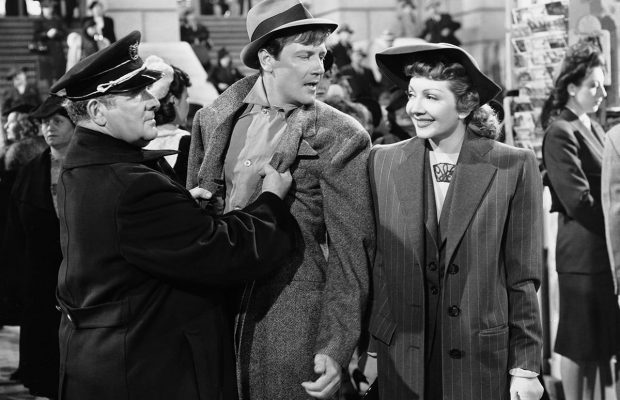 Toronto Film Society presented The Palm Beach Story (1942) on Sunday, November 22, 1987 in a double bill with Hellzapoppin as part of the Season 40 Sunday Afternoon Film Buffs Series “A”, Programme 4.

Toronto Film Society presented The Palm Beach Story (1942) on Monday, August 4, 1970 in a single bill as part of the Season 22 Summer Series, Programme 4.

Throughout his career in two-reel comedies, Chase alternated between comedies which presented him as a single man-about-town with a constant eye for a pretty girl, and those which portrayed him as a married man under the thumb of his wife.  In both silent and sound films, the first formula seemed to come off better than the second, perhaps because so many other comics were using the marriage formula in their comedies.  An example of the first genre, Looking for Sally has Charley returning from Europe, where he’s been going to school.  His parents have arranged for him to meet a childhood playmate, Sally (Katherine Grant), and hope that the two will hit it off.  As charley’s boat pulls in, he spots his parents on the dock below.  His Mother points to Sally, standing next to her, but Charley thinks she is pointing to another girl, a very ugly one, standing nearby.  At the same time, Mother points out Charley to Sally, and Sally’s eye catches a withered old man instead of young Chase.  Both disillusioned, Charley and Sally try to evade each other at the docks.  Then not far away, they meet each other, neither dreaming wo the other really is.  There follows a hilarious, complicated plot as Chase tries to go after the girl, who is asocial worker, pretending to be a destitute bum.  Of course, the two eventually discover their mistake, and everything ends happily.  This formula was so successful it was repeated, with slight variations, many times over the years.  The mistaken identity idea was a central part of Crazy Like a Fox (1926), Mighty Like a Moose (1926), A One-Mama Man (1927), and Skip the Maloo! (1931).

Most of Preston Sturges’ comedies, however uproarious, had something of a serious theme behind the fun.  In The Great McGinty it was political corruption; in Christmas in July the crass falsity of the world of advertising, and success based on a phoney reputation rather than genuine talent; in Sullivan’s Travels the hypocrisy of affluent Hollywood presuming to portray Depression poverty and misery; in (even) The Miracle of Morgan’s Creek, unwanted wartime pregnancy; in Hail the Conquering Hero the vagaries of hysterical hero-worship and obsessive Momism; The Great Moment, though laced with comic sequences was virtually a serious movie about the dentist who discovered anesthesia only to be rewarded with neglect and non-recognition; and in Unfaithfully Yours the hero dreams up several possible methods of killing his (supposedly) unfaithful spouse.

The Palm Beach Story, however, has no such disturbing or thought-provoking aspects.  Barring The Lady Eve it is Sturges’ most purely comic entertainment and can scarcely be said to be satirizing anything, unless it be the pursuit of wealth at any cost, the eccentricities of the already wealthy or (incidentally) the absurdity of businessmen’s hunting clubs.  From the wildly confused wedding preparations going on behind the credit titles, to an equally unlikely double ceremony at the end, the picture is in its way quite as zany as Morgan’s Creek but it is a less braod zaniness, encompassing fast-talking, sophisticated wit and fast-moving farce as well as slapstick, all deftly engineered. 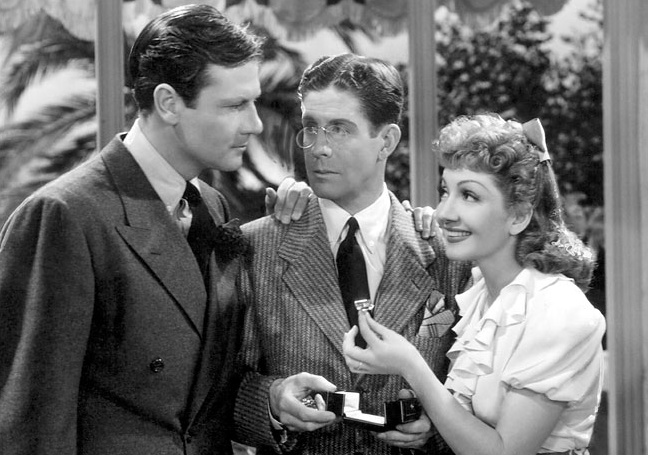 For reasons too nonsensical to detail, our heroine (Claudette Colbert) decides to divorce her husband and sets out for Florida to bag a millionaire.  (Along the way, in a justly celebrated train sequence, she becomes hilariously involved with a jolly group known as the “Ale and Quail Club”,  complete with guns and dogs).  Fortunately her prey turns out to be Rudy Vallee in a delicious performance as a well-heeled penny-pincher.  Equally fortunately, his sister turns out to be Mary Astor (in her best man-eating form–need one say more?) who sets her cap for Joel McCrea, Claudette’s alleged brother but actual husband who has followed her.  Near-volumes have been written criticizing or defending Sturges’ predilection for concocting preposterously unbelievable “happy endings” for his characters; the ending of The Palm Beach Story is one of his most preposterous, and funniest.  One interesting angle of the film, historically, is Sturges’ adroit manipulation (as is some of his other works) of potentially sexy material to steer it past the Code censorship of the time, although there is nothing as tricky as in Morgan’s Creek.  How he got away with that one (even with the suggestion of a hurried marriage) still seems something of a Miracle.

Claudette Colbert, for many years one of the most durable of movie stars, tackled a considerable variety of roles during a long career, including dramatic parts in Maid of Salem and Three Came Home, as ell as disporting herself rather splendidly in such De Mille sextravaganzas as Cleopatra (in which the master, never lacking gall, told the stories of “Julius Caesar”, “Caesar and Cleopatra” and “Anthony and Cleopatra” in something like 100 minutes) and The Sign of the Cross (in which her bath is asses’ milk remains a legendary highlight).  But she was best known, and at her best, as a knowing and delectable comedienne in roles ranging from “drawing-room” to “screwball” comedy (It Happened One Night, Midnight, Three Cornered Moon, Tovarch, The Bride comes Home, Practically Yours, I Met Him in Paris, Bluebeard’s Eighth Wife, etc. etc.).

Joel McCrea, although more recently known mainly as a western star, also handled successfully many kinds of assignments over the years–first a “straight romantic leading-man”, he had more serious roles in the Goldwyn-Wyler These Three and Dead End, Gregory La Cava’s Private Worlds, Jacques Tourneur’s Stars in My Crown; and of course the leads in the Sturges comedies Sullivan’s Travels and tonight’s film, as well as in the odd, serio-comic The Great Moment.  After that he appeared increasingly in Westerns, culminating in a distinguished swan-song, Sam Peckinpah’s Ride the High Country (Guns in the Afternoon).  That he isn’t still “carrying on” along with such perennial stalwarts as Henry Fonda, Jimmy Stewart and John Wayne is cause for regret.  Such honest and likeable players are increasingly hard to come by.

Rudy Vallee, once a bland-voiced and excessively gentlemanly but wildly popular “crooner” and band-leader, may owe years of extended -career to Preston Sturges who first had the inspired idea of playing his diffidently precise Yale speech and manner for laughs.  Since The Palm Beach Story Rudy has played quite a few more comedy roles, most successfully of course on stage and screen in How to Succeed in Business Without Really Trying.

Mary Astor, in yet another lengthy career, has run quite a gamut herself–from swooning virginal heroines (Barrymore’s Don Juan), through agreeably sophisticated “other women” (Goldwyn-Wyler’s Dodsworth), to the superbly definitive bitchery of the perfect Hammett heroine in Huston’s The Maltese Falcon–and the later character parts.  She’s as bright an ingredient in The Palm Beach Story as she was in last summer’s Midnight–even though she has been quoted as not being happy with the role and saying that Sturges had “wanted a dizzy blonde for m part and, landed with Mary Astor, he made her life a hell”!

From 1940 to 1944, in an almost incredible burst of creativity, Preston Sturges wrote and directed a string of memorable screen comedies for Paramount that included McGinty, Christmas in July, The Lady Eve, Sullivan’s Travels, The Palm Beach Story, The Miracle of Morgan’s Creek and Hail the Conquering Hero.  His last picture for Paramount, The Great Moment (1944), told the story of anaesthesia, and was apparently quite serious–at least for Sturges.  Paramount, however, wasn’t happy and demanded changes.  As released, the picture was a flop, and Sturges and Paramount parted company.

Penelope Houston, in her article on Sturges (Sight and Sound, Summer 1965), picks it up from there:

“After 1944, certainly, nothing was quite the same.  A partnership with Howard Hughes produced Mad Wednesday, with Harold Lloyd.  He directed Unfaithfully Yours, a comedy which was nearly brilliant, but not quite Sturges; then the less exhilarating The Beautiful Blonde From Bashful Bend.  There was a long silence, and then in 1955 came The Diaries of Major Thompson, with Jack Buchanan as an Englishman in Paris.  It was Sturges’ last film, and it was sadly, defiantly, unfunny, as though somewhere along the line the mainspring of that perfect comedy timing had snapped.”