Toronto Film Society presented The Preview Murder Mystery (1936) on Sunday, November 25, 1984 in a double bill with Some Came Running as part of the Season 37 Sunday Afternoon Film Buffs Series “B”, Programme 4.

One of the “Hollywood exiles”, Robert Florey was perhaps best known for his collaboration with Charlie Chaplin on the film Monsieur Verdoux (1946)–an experience which resulted in the two men never speaking to each other again, once the film was completed.  Chaplin’s legendary mistreatment of associates, however, did not prevent the French director from correcting many of the technical weaknesses of the film, even though the excessive dialogue and outdated style were ultimately due to Chaplin’s egotistical obstinacy.

Robert Florey’s career in Hollywood included a considerable number of “firsts”.  He directed the first Marx Brothers talkie (The Coconuts), the first starring vehicle of Bette Davis (Ex-Lady), the first film for which F. Scott Fitzgerald wrote the screenplay (The Pusher-in-the-Face), the first talkie by Edward G. Robinson and Claudette Colbert (The Hole in the Wall), and the first French-language musical film in Europe (La Route est belle).  Florey was also one of the first movie directors to begin working in television in the 1950s, and was awarded the first annual award of the Screen Directors Guild for the best-directed television film of the year (The Last Voyage, starring Charles Boyer).

Although classified as an excellent “B” director, Florey’s achievements run a more interesting gamut of related activities.  From the director of Mary Pickford’s foreign publicity in 1922, to French tutor to Douglas Fairbanks, Sr. and good-time companion to Rudolf Valentino, Florey progressed to such cinematic accomplishments as the writing of the screenplay of the original Frankenstein film, the direction of Murders in the Rue Morgue (co-written with John Huston), and The Beast With Five Fingers (a minor horror classic of 1946).  He also directed four well-received experimental films, two of which are considered among the best of the time (Hollywood Extra and The Loves of Zero). 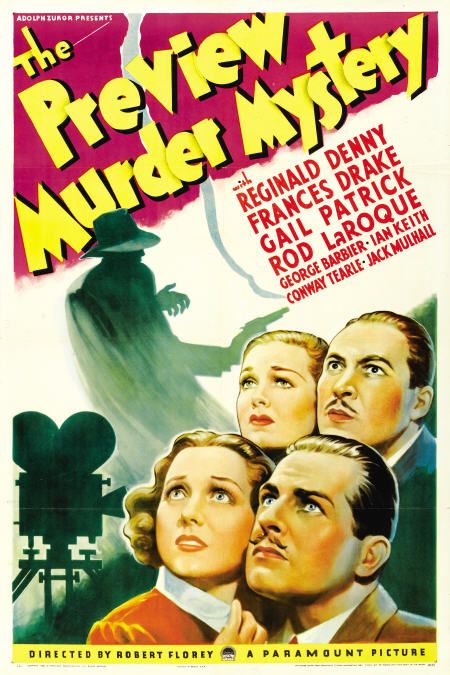 Perhaps his varied experience in Hollywood led Florey to be interested in films with a Hollywood background in the story.  The Preview Murder Mystery and Hollywood Boulevard both depict a behind-the-scenes view of the film studio.  In The Preview Murder Mystery, the “film-within-a-film” concept, combined with the murder mystery plot, give an interesting early version of a favourite combination of screenwriters over the years–right up to a recent television episode of Murder, She Wrote.

Although the movie-within-a-movie being shot in this film, called “The Song of the Toreador”, is definitely forgettable, it does the necessary job of launching the murder mystery at the Hollywood “première”.  As a crime story, the actual murder mystery violates all known canons of detective fiction ethics, but the handling of the surprise developments is accomplished with great skill by the director and gains in credibility by the Hollywood studio context which sustains the suspense by providing glimpses of all the details of film production in the 30’s.  (Look for the flash of the Mae West set in one of the scenes.)

The cast includes many of the oldtimers whom Florey frequently cast in small roles, among them silent favourites Conway Tearle, Bryant Washburn, Ian Keith (as the archetypal director), and Jack Mulhall (the screen “heavy”).  Florey inisted that the studio offer the lead role to his old friend, John Gilbert, who was at that time out of work and into the bottle, but Gilbert turned down the part when Paramount refused to meet his price.  However, Reginald Denny succeeds in the lead, and Frances Drake and Gail Patrick vie for honours in the female roles.  The handsome Rod LaRocque (his real name) is restricted to the beginning of the film, but makes the most of his role as the film star.

The rapid pace and convincing behind-the-scenes atmosphere contribute significantly to the effect of the mounting action, as the murders create a sinister environment on the “closed” set of the film studio.  All the amateur detectives in the audience will thrill to the various blind alleys, loose ends, and the characters trying to convince the viewer that they are the guilty party.  However, the scenes of studio film processes might be of more enduring historical interest.