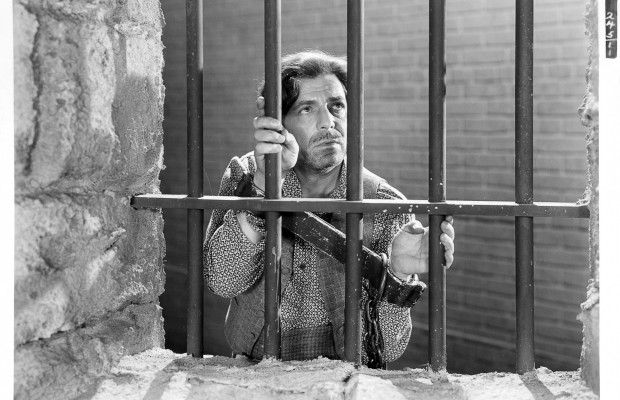 Toronto Film Society presented The Prisoner of Shark Island (1936) on Monday, April 12, 1976 in a double bill with One More River as part of the Season 28 Monday Evening Film Buff Series, Programme 7.

“As far as the expense of putting this on goes, they do not seem to have spared the horses, the background being as logical and persuasive with atmosphere in the 1865 countryside as in the prison on the Dry Tortugas, in Ford’s Theatre as in the doctor’s home.  And they apparently got the right man to work on these materials director John Ford, whose genius shows in the management not only of the action, but of the actors in it, so that the routine parts of Ernest Whitman, John Carradine, Claude Gillingwater, Harry Carey, O.P. Heggie, and even the child Joyce Kay mean something and come to something, slip into the story with a complete absence of all the usual business of entrances, takes, scene-chewing.

Ford is the one who is responsible for the way the action moves from the establishment of the period to the assassination and getaway, the resetting of Booth’s leg and subsequent apprehension of Mudd, the trial, Mudd’s prison life and near-escape and final service during the plague.  The escape sequence is among the most vivid and somber that have been made–Warner Baxter (as Mudd) loose somewhere inside the heavy sultry walls, suspicion rising, the guard being broken out, and the angle shots of Baxter climbing desperately up and over the stones toward the moat, where he is finally silhouetted clearly in the rifle sights.  The oppressive hysterical atmosphere of the yellow-jack siege is felt in the audience; and the whole business of the prison is made terrible with authentic detail–stilted quick-time of the guard, the dead murderous heat and its effect on the men, the thick walls, the surf off-stage, the empty iron routine of the guard room, even the bugles sounding, the rifles locked properly in their racks.  It would not, however, have been possible in its present strength without the main figure of Warner Baxter, who rises out of his former halfway pictures (or worse) into an absolutely first-class piece of acting.  The story of this country doctor caught in the machinery of large matters is wide and complex and he is in the center of it–tender, furious, bitter, suffering, plain tired, whatever is needed.  He carries the demands of the part with solid strength and subtlety of shading.

But too much taking to pieces may very well obscure the real effect of the assembled whole.  The Prisoner of Shark Island is a powerful film, rarely false or slow, maintaining the relentless cumulative pressure, the logical fitting of one thing into another, until the audience is included in the movement and carried along with it in some definite emotional life that is peculiar to the art of motion pictures at its best.”