Toronto Film Society presented The Scarlet Pimpernel (1935) on Sunday, October 22, 2017 in a double bill with Sherlock Holmes and the Secret Weapon as part of the Season 70 Sunday Afternoon Film Buff Series, Programme 2. 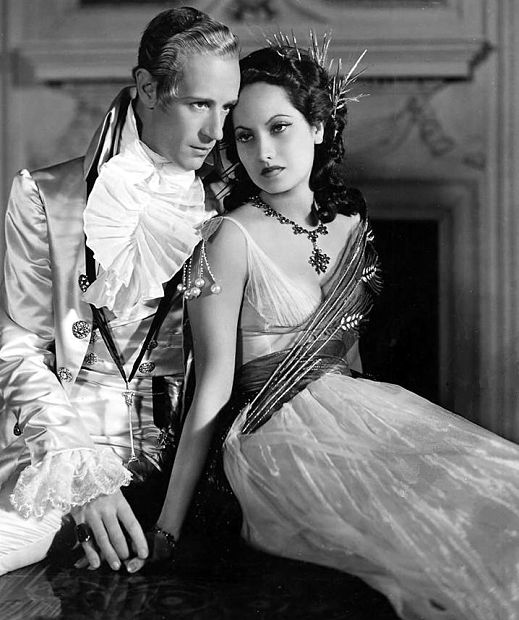 With regard to The Scarlet Pimpernel, the author, Baroness Orczy was a member of a noble Hungarian family, born in 1865. Her parents were forced to leave Hungary in 1868 in fear of a peasant rebellion and lived in various European countries before settling in England in 1880. She tried to earn a living for herself and her husband as a writer, but had little success with her first novels until she and her husband wrote a play based on one of her stories about an apparently foppish and ineffectual English aristocrat Sir Percy Blakeney who rescues French aristocrats from the guillotine under the alias of the Scarlet Pimpernel. The play was a huge popular success with 2000 performances in London and equal success all over Europe. She followed this up with a dozen sequels featuring this character and also numerous historical novels that were enormously successful at the time but are now mostly forgotten. Tonight’s film, starring Leslie Howard, is considered the best of the series. The Pimpernel character is often thought to be the origin of dual identity characters such as Batman, Zorro and Superman.

“Alex was Hungarian, imaginative, intelligent, extravagant.
Although lacking business sense, he had an uncanny ability to find money,
and he also had an uncommon feeling for quality.” – Raymond Massey

The “auteur” theory of film authorship may apply most often to directors, but other artists can certainly acquire the label, be they writers, actors, cinematographers, or composers. The Scarlet Pimpernel (1934), one of the great costume adventure films of its time, is the work of an auteur producer, Alexander Korda. His stamp is simply all over the movie, beginning with the script’s overall wit and humour—two qualities which were in short supply in the original source material.

The Scarlet Pimpernel began life as a 1905 play by Hungarian Baroness Emmuska Orczy and Montague Barstow. Three years later, it was novelized by Orczy as the first of a series of novels. The story is set during France’s Reign of Terror. Innocent French noblemen are being guillotined daily, but a mysterious man heroically rescues many of them, always leaving behind a small red flower—a pimpernel—as his trademark. The Scarlet Pimpernel, as he is called, is revealed to us to be Sir Percy Blakeney, a British aristocrat who pretends to be a foppish and ineffectual dandy in order to throw off suspicion. Even his disgusted French wife is unaware of his secret identity. The French, however, figure out that the Pimpernel is English and send an emissary, Chauvelin, to London to find him.

Korda originally had Charles Laughton in mind for Blakeney, but luckily he ended up with Leslie Howard, who became a huge star because of this picture. As Blakeney’s wife, he cast the beautiful Merle Oberon (who later became Mrs. Korda), and playing the villain Chauvelin was Canadian actor Raymond Massey. Two more production members, imported from America, were cinematographer Harold Rosson and editor William Hornbeck, both among the finest in Hollywood at their professions. This was  a sign of Korda’s extravagance—bringing over such craftsmen was definitely not the norm for British movies at this time. Assembling the right crew, however, is one of the chief jobs of a producer, and Korda knew how to hire a winning combination of people to achieve what he wanted. In the case of The Scarlet Pimpernel, Korda wanted to fully and lavishly recreate the French Revolution, and these were the people to pull it off in style. (Both Rosson and Hornbeck stayed to work on a few more Korda pictures, as well.)

The Scarlet Pimpernel’s original director, Rowland Brown, was famously fired on just the first day of production, after butting heads with Korda. According to Raymond Massey’s autobiography, A Hundred Different Lives, Korda watched Brown direct a scene and the told him disapprovingly that he was shooting it as if it were a gangster film. Brown replied that he would direct it his way or walk out. Korda said, “Please walk,” and Brown was gone. Korda directed the scene himself and, by that afternoon, had hired a replacement, Harold Young. Korda kept Young on a tight leash, however. As Massey wrote, “The next day, Young ostensibly took over, but the direction throughout the months of shooting remained an unofficial but smooth collaboration.”

While acting in The Scarlet Pimpernel, Raymond Massey was also starring and directing the play The Shining Hour on London’s West End, following a 125-performance run on Broadway. He managed to handle both the play and the movie, even though it meant consistent 15-hour days. Korda accommodated him by providing a car and driver each day, thereby allowing Massey to catch up on sleep during the one-hour drive to and from Elstree Studios.  It also helped that, during each performance of The Shining Hour, Massey ate two full hot meals on stage as part of the play itself.  (In theatre circles, the play was known jokingly as “The Dining Hour.”)

“I never had such fun working in a movie as I did on The Scarlet Pimpernel,” Massey would later recall. “Of all the heavies I have played on the screen, the most wicked and the most fun to do was Chauvelin. There was a spirit in that company, a feeling of confidence, a sort of elan which I have often found in the theatre but never sensed in any other movie.”

The Scarlet Pimpernel has been a popular source for moviemakers, over the years. It was made into several silent films and remade countless more times for film and TV. Korda himself oversaw two further versions—a sequel, The Return of the Scarlet Pimpernel (1937), with a different cast, and a remake, The Elusive Pimpernel (1950), directed by Michael Powell and Emeric Pressburger. Leslie Howard directed an entertaining, modern-day version of the story in 1941, called Pimpernel Smith (also known as Mister V), in which he plays an effete academic who rescues victims of Nazi Germany.