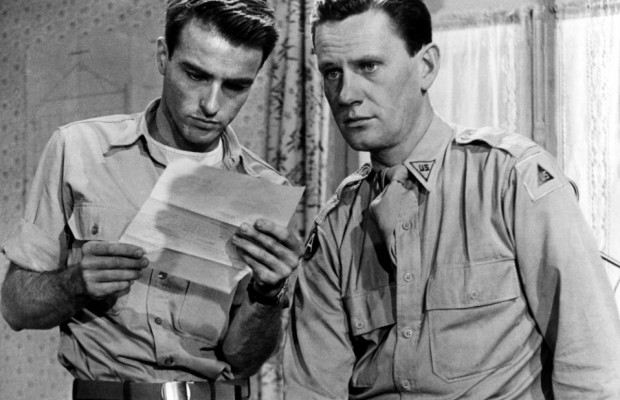 Toronto Film Society presented The Search (1948) on Monday, April 2, 1979 in a double bill with Confessions of a Nazi Spy as part of the Season 31 Monday Evening Film Buff Series, Programme 9.

Montgomery Clift was a successful stage performer who began his ever more successful film career as a star performer in his first two films, Red River and The Search.  Although The Search was the second film he made, it was released several months before Red River.  Clift was given a Best Actor nomination (losing to Laurence Olivier’s Hamlet).  MGM had reluctantly backed the film, expecting the Wechsler effort to be another prestigious box-office failure which, at best, might win some European film festival award.  However, when it proved to be a popular and a critical success, thanks in no small part to its leading man, the studio rushed it into expensive nationwide distribution.  Magazines and newspapers ran feature stories on it and the name of Montgomery Clift began appearing in the fan magazines, enormous box-office stimulants in those days.

The idea originated with Swiss producer Lazar Wechsler.  He wanted to make a film dealing with children displaced by war, and he was quite familiar with the plight of such children who had lost parents and families.  On a visit to America in 1945, Wechsler became impressed with two things: the innate generosity of Americans and their complete lack of comprehension of the extent of suffering abroad.  he also realized that this lack of comprehension had made Europe suspicious of American generosity.  He was keenly aware that a film, correctly done, could serve to interpret this problem internationally.

Fred Zinnemann was approached to direct the film.  One reason was because Zinnemann’s The Seventh Cross with Spencer Tracy had been very popular in Europe.  This rarely happened, usually due to an apparent lack of authenticity whenever American films dealt with an European locale.  Also, Zinnemann spoke German which helped greatly, as he spent several months in Displaced Persons Camps in the American and British Zones in Germany, trying to imagine what the things were like that these people had gone through, seeing their living conditions and hearing their own stories.  It was felt important to get as many elements as possible from first-hand observation, from seeing and studying the locale and talking to a maximum number of people who had been directly involved in the period of history to be portrayed in the film.

The finished product is a dramatic appeal in semi-documentary form for the displaced children of Europe, and it has, among other qualities, the virtue of being acted by an international team, each member of which adheres strictly to his or her mother tongue. Clift and Aline MacMahon give fine performances as American members of U.N.R.R.A.  Met opera star, Jarmila Novotna is the Czech mother who patiently searches for her lost child, nine-year old Ivan Jandl as her son is superbly natural.  Looked at coldly, perhaps, The Search is an exercise in sentimental coincidence, a film that would, as a McCalls reviewer claimed, “wring tears from a turnip”.  But you can’t look at it coldly.  Life has its coincidences no less sentimental than the reunion between mother and son and the film has a sincerity of felling which removes any suspicion of the artificial.  Its intention, which is most laudable, was to draw world sympathy towards the terrible problem of sorting out young lives, of putting back the human spirit into animal bodies, and of restoring the blessing of family life.  It does this and more, superbly.