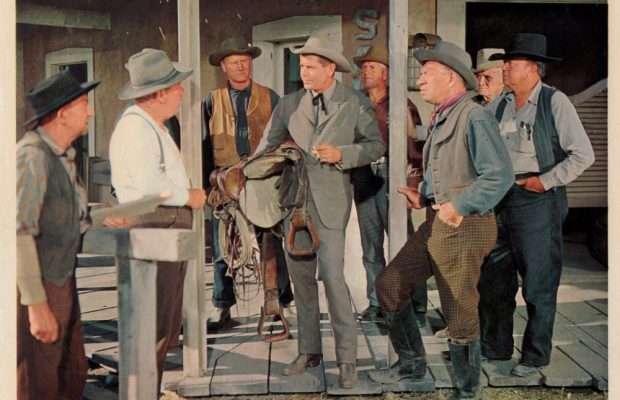 Toronto Film Society presented The Sheepman (1944) on Monday, April 7, 1980 in a double bill with Curse of the Demon as part of the Season 32 Monday Evening Film Buff Series, Programme 8.

The Sheepman is a Western with a difference and that difference is what makes th film enjoyable.  It is simply that instead of the usual kind of story with much serious feuding between two divergent sides, The Sheepman treats the standard rivalry with humor and a certain amount of spoof.  It doesn’t take itself too seriously.  Director George Marshall knows his way around a Western and here shows how it should be done.

George Marshall (1891-1975) has more than 400 features to his credit.  He entered films as an extra with Universal in 1912 and soon graduated to feature roles in early serials and comedies.  He began directing in 1917 with a series of Harry Carey westerns and some of the Westerns he has since directed are Destry Rides Again (1939), When the Daltons Rode (1940), Fancy Pants (1948) (a remake of Ruggles of Red Gap) with Bob Hope, The Savage (1952), Red Garters (1954), and part of How the West Was Won (1962).  He’s an honest craftsman and in tonight’s film shows fine perception in mildly spooking the Western and keeping the story jogging genially along, without going overboard with farcical possibilities.  He knows how to get the most out of the script and out of the performers, even drawing some animation out of the usually stoical Glenn Ford.  In fact, all the performances are ingratiating.  One of the best is by Michey Shaughnessy as the bouncer for cattleman Leslie Neilsen.  His tough-man encounters with the amiable sheepman of Ford leave him reduced to a slag heap of pot belly, wounded dignity and scowls, whose utter frustration is treated cheerfully by Ford.

Edgar Buchanan, a fine old hand in Westerns, is perfect as a local crackerbarrel philosopher whose devotion to principles is nil.  Ford sizes him up early.  “You’d sell anybody for five bits,” he says.  Buchanan, squinting serenely, replies, “My price for that sort of thing starts at a dollar.”

Shirley MacLaine is equally good as the vaguely betrothed of cattleman Nielsen.  Her blissful nonchalance in times of crisis and her caualness with frivolous remarks help to preserve the tone of mockery that is the best thing about the film.

Unassuming and pleasantly old-fashioned in its lack of show, especially in the early scenes, the film eventually settles down to a rather more direct presentation of chases and gun duels, with the predictable showdown between the haughty and grim cattleman Nielsen and sheepman Ford.  In fact, there are two showdowns.  It’s rather a pity because the story is more fun when it’s being casual, and the blend with dramatics is not entirely satisfactory.  Still, it has many felicitous moments for which we can all be grateful, considering the grimness with which such a theme is usually pursued in Western movies.

PLEASE – NO TALKING DURING FILMS

IF SOMEONE NEAR YOU TALKS DURING THE FILM, FEEL FREE TO TELL HIM/HER TO PLEASE KEEP QUIET.

TALKING IS WELCOME DURING INTERMISSIONS.