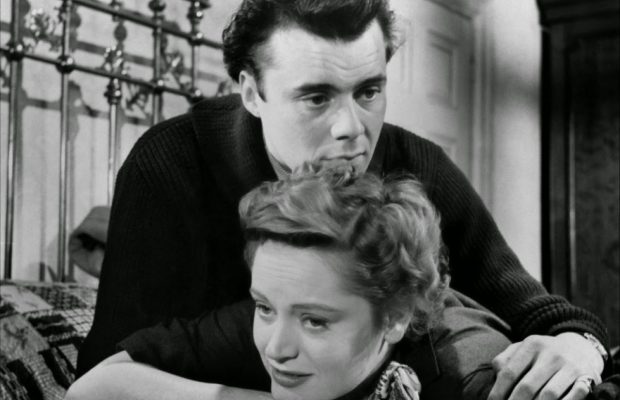 Toronto Film Society presented The Sleeping Tiger (1954) on Monday, April 9, 2018 in a double bill with Home at Seven as part of the Season 70 Monday Evening Film Buff Series, Programme 7.

I had first met Joseph Losey ten years before, on a bitter winter afternoon at the Studio.  I knew nothing about him save that he was an American refugee from McCarthy, a director of talent, that his assumed name, for security reasons was Victor Hanbury, and that he was setting up a small budget film and was hopeful that I could be interested to play in it;  my presence, it was explained, would help him to increase, if not double, his budget.  I was not truthfully interested.  Tired after making three films in a row, uncertain of this director with an assumed name, I agreed, at least, to let him show me some of the last film he had made before he had had to leave Hollywood and the witch-hunt.  I hope that I was not patronising; I know that I was not enthusiastic at the time.

It was freezing in the small theatre where the film was projected.  I was alone, since he preferred to walk about outside in the slush like an expectant father, and quite unaware of the importance for him, then, of my acceptance or not of his work.  After 20 minutes I knew, without any doubt whatsoever, that the one person I wanted to work with most was kicking his heels in the car-park in a long blue overcoat waiting for my verdict.  We watched the rest of the film together in silence—it was called The Prowler—and after, in the Studio Bar, he started to outline for me the ideas he had for a little thriller.  Alexis Smith willingly agreed to join us, taking an incredible risk for an American actress in those days of McCarthy, and so became my first Hollywood leading lady.  The modest budget was therefore, predictably, doubled, and in high heart we all set off.

The result, after weeks of uncomfortable work in a run-down little studio where we had to fire a gun to frighten away the sparrows from the Sound Stage before every take, served to form a bond of respect and affection which was to last a lifetime.

Snakes and Ladders by Dirk Bogarde (1978) 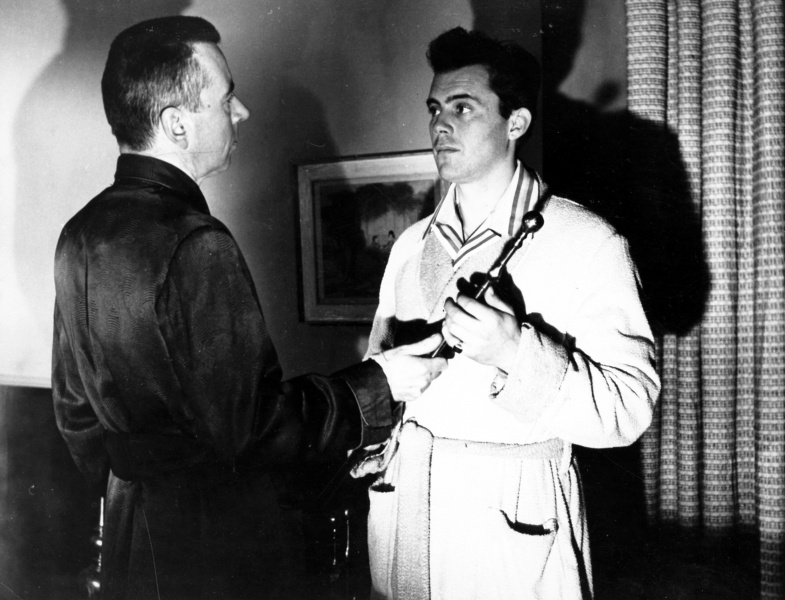 Production: U.S. director Joseph Losey (see below), who had been blacklisted in America in the McCarthy era due to his alleged ties with the U.S. Communist Party, moved to London, where he began work on his first British feature film, The Sleeping Tiger. As the American stars, Alexis Smith and Alexander Knox, were fearful that appearance in the film might affect their Hollywood careers, the British director, Victor Hanbury, allowed Losey to use his name as an alias on the film’s initial release. Later screenings credit Losey.

Plot: After a criminal (Dirk Bogarde) breaks into a psychotherapist’s home and holds him up at gunpoint, the therapist manages to overpower him. Given the choice between prison and living in the doctor’s house while acting as a human guinea pig for the doctor’s experiments to cure him of his criminality, he agrees to rehabilitation rather than arrest. The therapist’s wife is initially reluctant to accept this, but gradually becomes infatuated with him while growing jealous of his friendship with her husband, who has become like a father figure to him.

Joseph Losey (1909-1984): Born in Wisconsin, he was a high school classmate of another future film director, Nicholas Ray. He then attended Dartmouth College and Harvard University, graduating in drama. He became a major figure in New York political theatre in the 1930s and visited the Soviet Union in 1935, where he attended a seminar on film taught by Sergei Eisenstein and also met Bertolt Brecht, who was visiting Moscow at the time. Returning to the U.S.A., he worked in politically themed productions on Broadway; renewed his acquaintance with Brecht, who was living in Los Angeles as an exile from the Nazis; and co-directed Brecht’s play The Life of Galileo with Charles Laughton. He accompanied Brecht to his appearance before the House Un-American Activities Committee (H.U.A.C.) in 1947, after which Brecht returned to Europe. Losey directed Laughton in a New York production of Galileo and then made his first feature film, The Boy with Green Hair, a political allegory concerned with tolerance and understanding, starring a young Dean Stockwell, in 1947. He followed this with a remake of Fritz Lang’s M, set in Los Angeles, in 1931.

By now, he had attracted the attention of the F.B.I. for his left-wing activities and associations, as had his then-wife, Elizabeth Hawes. He joined the Communist Party in 1946, and had a long-term contract with RKO when the company was purchased by Howard Hughes, who began to purge it of leftists and kept Losey on contract while denying him any work. Finally, in 1949, he was able to work as an independent for Paramount before H.U.A.C. attempted to force him to testify before the committee. Losey then left for Italy, where he worked for some time before returning to the U.S., where he found himself unemployable.

He eventually moved to Britain, in 1953, where he resumed his film career with The Sleeping Tiger and other genre films, sometimes under a pseudonym, including the gangster film The Criminal (1960) and the science-fiction work The Damned (1963). He then met and began to work with the playwright Harold Pinter, with whom he produced three of the finest British films of the 1960s: The Servant (1963), starring Dirk Bogarde; Accident (1967), also starring Bogarde; and The Go-Between (1971). These highly stylized and visually complex films, accompanied by Pinter’s elliptical and enigmatic dialogue, won numerous awards, both in Britain and internationally. Interspersed with them were the anti-war King and Country (1964); the comic-strip spy film Modesty Blaise (1966); a psychological thriller, Secret Ceremony, starring Elizabeth Taylor (1968); and Boom! (also 1968), starring Taylor and Richard Burton, the last of which was generally thought to be stylistically overblown almost to the point of being ridiculous. Losey’s artistic reputation was salvaged to a considerable extent, however, by three films that he then made in France: Monsieur Klein (1976); Les Routes du Sud (1978); and La Truite (1982), as well as a spectacular filmed production of Mozart’s opera Don Giovanni, in 1979. He died in 1984.

(Sir) Dirk Bogarde (1921-1999): Born Derek Jules Gaspard Ulric Niven van den Bogaerde in London, of mixed Flemish, Dutch, and Scottish ancestry, he studied at the Chelsea College of Art and Design and served with the rank of captain as an intelligence officer in Europe and the Pacific in World War II. His claim to have been one of the first Allied officers to reach the Bergen-Belsen concentration camp in Germany has been disputed but, nevertheless, the horrors he witnessed during warfare profoundly affected him. His acting career began in West End theatre in 1939 (as Dirk Bogaerde). Renamed Dirk Bogarde, he worked for the Rank Organisation after the War, primarily as a handsome matinée idol in the series beginning with Doctor in the House (1954), though his role in the police drama The Blue Lamp had preceded this, and he made his first of five films with American expatriate Joseph Losey, The Sleeping Tiger (also 1954). Other films of this period include Cast a Dark Shadow (1955); A Tale of Two Cities (1958); and Libel (1959), in which he was still largely known as “The Matinee Idol of the Odeon”.

He left the Rank Organisation in the early 1960s, and began to take on more challenging roles with Victim (1961), directed by Basil Dearden, the first British film to take a sympathetic view of male homosexuality (illegal in Britain until 1967). In it, he plays a barrister wrongly suspected of a homosexual relationship with a younger man who is being blackmailed, with the barrister himself implicated by the blackmailers. This was a courageous role to take for someone previously associated with a fully heterosexual “heartthrob” image and may partly have been responsible for the (often denied, but finally tacitly acknowledged) rumours of Bogarde’s own supposed homosexuality throughout the remainder of his career.

Victim was followed in 1963 with a second film for Losey, The Servant, one of the finest of all British films, which established Bogarde as one of the greatest contemporary film actors and was followed by three more films with Losey, King and Country (1963); Modesty Blaise (1965); and Accident (1966)—this last, like The Servant, scripted by Harold Pinter. Other successful and prestigious films of this period were Darling (1965), directed by John Schlesinger, and Our Mother’s House (1967), directed by Jack Clayton. By the late-1960s Bogarde was internationally recognized as a major actor and sought after by French directors, such as Alain Resnais (Providence, 1977) and  Bertrand Tavernier (Daddy Nostalgia, 1990); the Italians Luchino Visconti (The Damned, 1968, and Death in Venice, 1971); and, less successfully, Liliana Cavani (The Night Porter, 1974); and the German, Rainer Werner Fassbinder (Despair, 1978). All these along with other less demanding or more commercial projects. In later life, he developed a second career as a successful, witty, elegant, and highly literate novelist and autobiographer, and was the first Briton to serve as the president of the jury at the Cannes Film Festival. He was knighted in 1992 and received honourary doctorates from two British universities.

Alexis Smith (1921-1993): Born in British Columbia, her parents moved to Los Angeles and became naturalized U.S. citizens, which gave her American citizenship, as well. She grew up in Los Angeles and, after being discovered by a talent scout while attending college, was signed to a contract by Warner Brothers. Her earliest film roles were uncredited; she was first credited for Dive Bomber (1941), playing opposite Errol Flynn. During the 1940s, she also starred opposite Fredric March, Humphrey Bogart, Cary Grant, and Bing Crosby, playing and being typecast as “an aloof, glacial beauty” who rarely played leading roles. After a happy marriage to former B-movie star Craig Stevens, she retired for a time before returning to both film and stage in the 1970s, and ended her film career in Martin Scorsese’s The Age of Innocence, in 1993.

Billie Whitelaw (1932-2014): A regular performer for stage, radio, and television from the age of 11, mostly originally in roles of “blousy blondes and secretaries”, she matured into a serious and well-respected actress in award winning roles. She was particularly noted for her work with playwright Samuel Beckett, with whom she collaborated closely and was regarded as one of the prime interpreters of his work.

Alexander Knox (1907-1995): Born in Strathroy, Ontario, he studied English Literature at the University of Western Ontario, where he also acted for the university’s drama club. His professional acting career began in Boston, but he moved to England in search of better opportunities. There he met the stage director Tyrone Guthrie, who helped him to find roles at the Old Vic, where he acted alongside Laurence Olivier and Ralph Richardson. His movie work began in 1938, but he returned to America on the outbreak of World War II, where he found leading roles on Broadway and then in Hollywood, in 1941, with The Sea Wolf. His subsequent film roles were usually as a man of integrity and quiet authority, until he was blacklisted by H.U.A.C. for left-wing activities and forced to leave for England. There he appeared in many British films, most notably in four for his friend and fellow exile, Joseph Losey—The Sleeping Tiger; The Damned; Accident; and Modesty Blaise. He was also a novelist who published several adventure novels set in the Great Lakes area during the 19th Century.