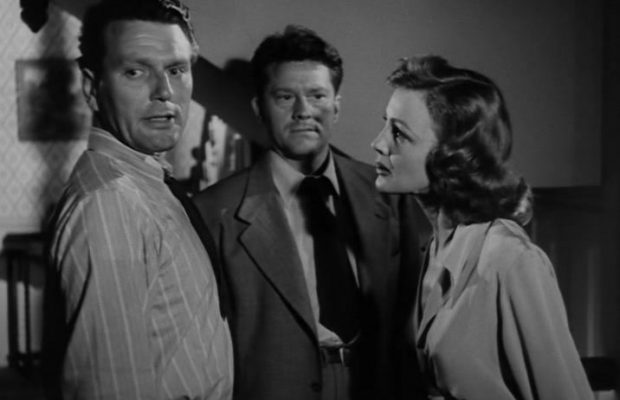 Toronto Film Society presented The Threat (1949) on Monday, August 27, 2018 in a double bill with Rope of Sand as part of the Season 71 Summer Series, Programme 7. 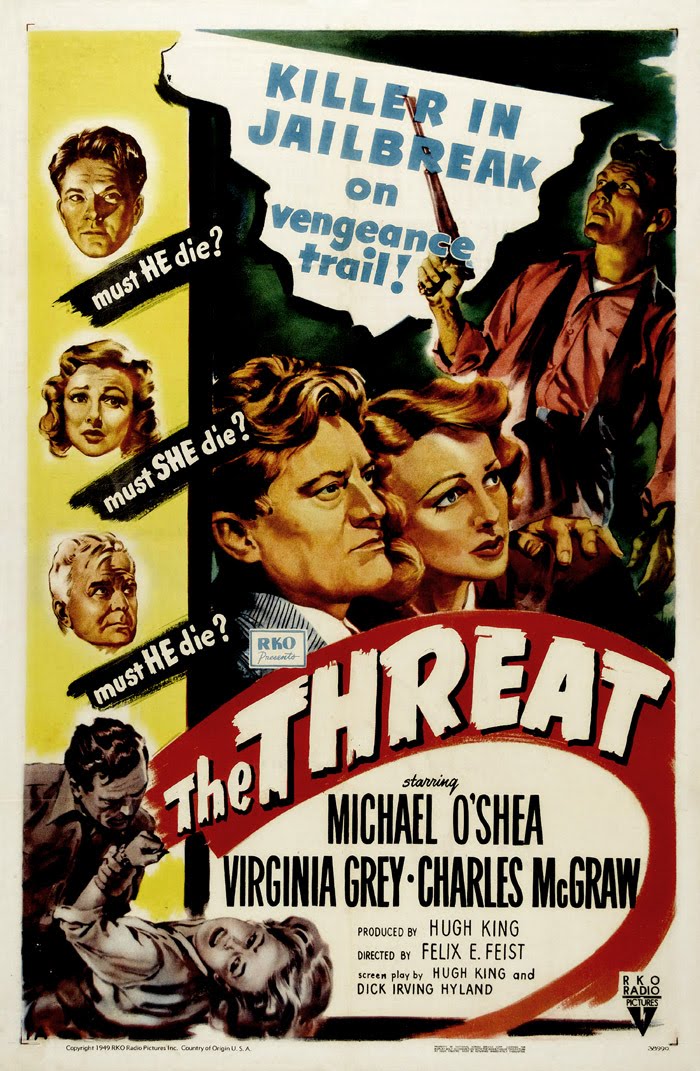 Charles McGraw’s work in The Threat was akin to a virtuoso performance by a spitting cobra.  Charlie spewed forth a hail of venomous insults, coercion and actual bullets in a portrayal of unabashed ruthlessness that startled audiences with its intense ferocity.  McGraw’s indelible performance reinforced his typecasting as a heavy, but he didn’t worry too much about it if the picture was realistic and he was getting paid.  “Oh, I don’t mind playing the bum and tough guy in pictures if it’s real,” Charlie explained.  “But some of those long-haired writers kick it in the head because they seldom go outside a studio or college library.  I really blow my top when they try to foist on me some foreign-born writer’s idea of the New York or Chicago gangster world.”

The Threat garnered enthusiastic reviews in the trade papers and was widely received as a minor league White Heat, which had premiered with great fanfare a couple of months previously.  More specifically, Charlie’s performance became a minor sensation that invited comparisons to Richard Widmark’s ruthless turn in 1947’s Kiss of Death.  McGraw became a sensation and received the greatest public acclaim of his entire acting career.  Virginia Grey, McGraw’s co-star, even went out of her way to compare McGraw to Burt Lancaster and Kirk Douglas.

McGraw’s agent Paul Wilkins, moving quickly to capitalize on the wave of rave reviews, arranged for a full-page image of Charlie on the rear of both Daily Variety and The Hollywood Reporter on Friday, November 4, 1949, lauding the star for his performance in The Threat.  McGraw’s positive notices and the plethora of fan mail addressed to him that was received by RKO following the release of the picture convinced RKO owner Howard Hughes that he needed to move quickly to lock up the suddenly marketable actor to a long-term deal.  In an interesting recollection, Jill McGraw remembered her father at home, writing some of his own fan mail to RKO during this period in what was no doubt an inspired effort to impress the studio to offer him a long-term contract and better roles.  How many of the so-called “fan letters” were actually written by McGraw remains a mystery.  What was undeniable was that the positive publicity associated with McGraw’s performance in The Threat made him a hot prospect.  After viewing the first rushes on his next film, RKO offered Charlie a seven-year contract starting at $750 per week.  McGraw inked the deal on January 14, 1950. 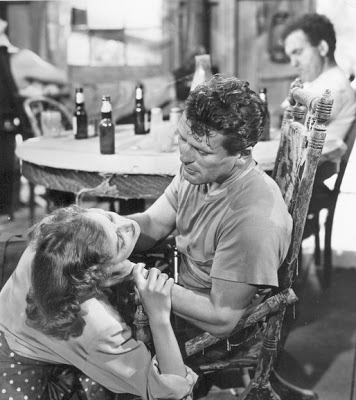 The Plot: “An escaped con (Kluger) kidnaps the people he thinks put him behind bars.” (TCM.com)

Originally titled Terror, The Threat was helmed by Columbia University-educated director Felix E. (Ellison) Feist, son of MGM Sales Executive Felix F. Feist. Feist Jr. got his start churning out short subjects and featurettes for MGM, but his best-remembered work comes from his period as a B-movie director for RKO, which either produced or distributed such films of his as Deluge (1930), The Devil Thumbs a Ride (1947), and, of course, The Threat. Feist is also remembered for having directed The Big Trees (1952), infamously noted as the film that Kirk Douglas did for free, provided Warner Bros. release him from his long-term contract soon afterward.

The role of Carol was first assigned to RKO contract star Gloria Grahame, but when she refused (and was consequently suspended by the studio), it went to Virginia Grey. Grey, whose first babysitter was Gloria Swanson, was discovered on the Universal lot at age nine—likely in the company of her father, Raymond (“Ray”) Grey, who was one of The Keystone Kops, or her mother, a film cutter. She made her film début at age ten, as Eva in Uncle Tom’s Cabin (1927). Sensibly, she halted her career as a child actress in favour of her education, and only returned to the movies as an adult in the 1930s, taking extra work and bit parts. In time, she signed a contract with MGM, which she left by 1942 to find work on her own. It was a successful venture, as she would end up working at almost every studio in Hollywood before retiring in 1970.

Michael O’Shea, born on St. Patrick’s Day in 1906, dropped out of school and worked as a tobacco planter, newspaper boy, and Western Union messenger before breaking into show business as a musician in the 1920s. By 1945, he was on Broadway in The Eve of St. Mark, playing Pvt. Thomas Mulveroy—the same role he would be asked to reprise in the 1944 film version. Two years before filming The Threat, O’Shea married Virginia Mayo, and the couple remained married until O’Shea’s death of a heart attack in 1973 at age 67.