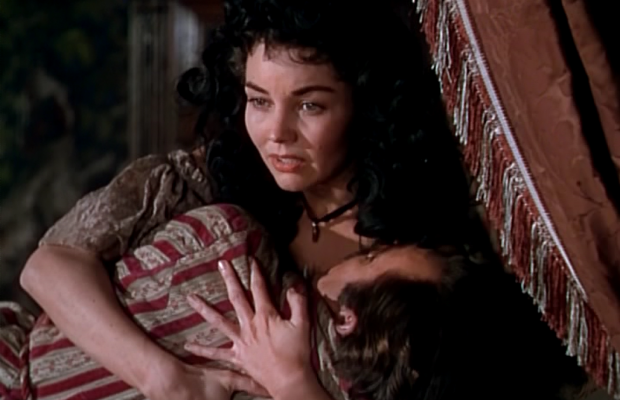 Toronto Film Society presented The Wild Heart/Gone to Earth (1950/52) on Sunday, January 20, 1985 in a double bill with Jesse James as part of the Season 37 Sunday Afternoon Film Buffs Series “B”, Programme 6.

The story of the making and release of The Wild Heart is probably more interesting than the film itself.  The picture was filmed under the title of the book it was based on, “Gone to Earth”, and released with that title in Great Britain and the Empire in November of 1950.  Gone to Earth was a co-presentation of Alexander Korda and David O. Selznick, with Selznick controlling the U.S. rights, and Michael Powell and Emeric Pressburger directing.  Powell later observed, “If you’re making a film between Goldwyn and Alex Korda…you get ground to powder” (Powell and Pressburger worked on another film, The Elusive Pimpernel, at the same time as Gone to Earth, for Korda and Goldwyn).  Gone to Earth ran 110 minutes, with much of its stunningly beautiful footage devoted to locations in the magnificent Shropshire countryside.  It was not well received by the English audiences or critics.  David O. Selznick, who didn’t have a hand in the actual production, but retained U.S. control due to his loan-out of his wife, Jennifer Jones, was dissatisfied over the inadequate amount of screen time preserved for Jennifer Jones’ close-ups.  He threatened Powell: “I’m going to sue on deviation from the script”, to which Powell responded: “But we didn’t deviate.”  Selznick: “That’s what I’m going to sue you on.” 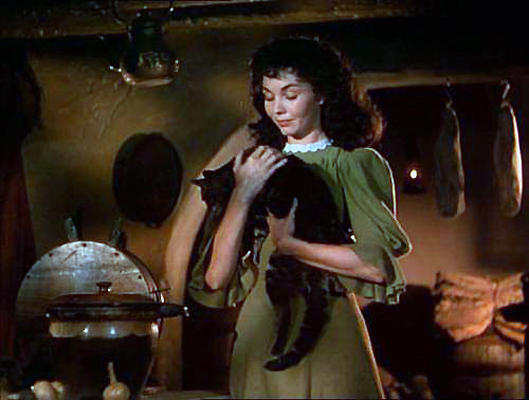 Selznick convinced his friend, Rouben Mamoulian, to re-cut the film and shoot two weeks of new footage in Hollywood with Jones, Cyril Cusack and David Farrar.  All but thirty-five minutes of the original Gone to Earth were thrown out, and the resulting film, with an opening prologue spoken by Joseph Cotten, opened in the U.S. in the summer of 1952, with a running time of 82 minutes.

Finally, we should note that both of this afternoon’s films are being presented in 35mm Technicolor prints.  There is no question that Technicolor, from 1935 to 1955, was the finest colour process in film history, and the only colour process that does not noticeably deteriorate in time.  This afternoon’s prints serve to point out the great advantages of the process over non-Technicolor films TFS has screened in recent times, such as Some Came Running, North to Alaska and The Swan this year, and The Great Escape, The Sheepman, Comanche Station, The Magnificent Seven, The Horse Soldiers etc., in the past.  Enjoy the green grass and trees, the blue sky and water, the brown earth, and the red dresses and blood.  They just can’t make films like this anymore!