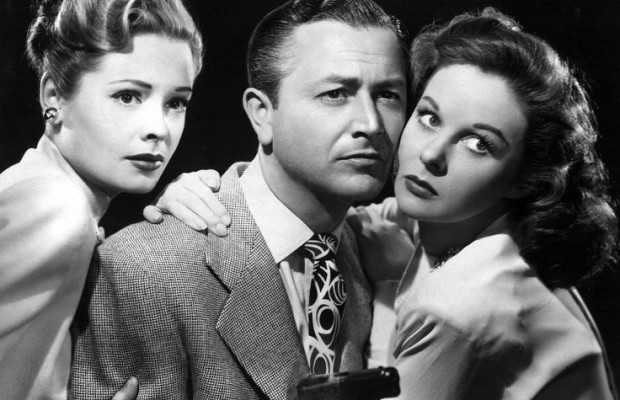 Toronto Film Society presented They Won’t Believe Me (1947) on Monday, January 23, 1978 in a double bill with Joy of Living as part of the Season 30 Monday Evening Film Buff Series, Programme 6.

TFS members who attended last year’s Film Buff Series will remember the tremendous success of the Susan Hayward double feature (presenting Deadline at Dawn and My Foolish Heart) almost twelve months ago.  At least, I recall great impact from the prgoramme.  The husband-and-wife, who are alleged to have specified “no more Susan Hayward” on a questionnaire, I take to be fictitious and invented by someone in authority to tease admirers of the Brooklyn Bernhardt.  Following the tremendous success already referred to, therefore, the Programme Committee decided to book another Susan Hayward film for this season–restricting ourselves to only one, in case the fictitious couple were not fictitious.  Alas, the choice of Hayward titles currently available in Toronto is disgracefully limited.  We could not locate Smash-Up (The Story of a Woman) or I’ll Cry Tomorrow or several others.  We almost got our hands on Tulsa (in Technicolor, yet) but were later informed that the print had been “lost”–i.e., very possibly, stolen, although not, I swear, by me.  After much debate internal, the choice was made of They Won’t Believe Me.  It has serious shortcomings as a Hayward vehicle, alas.  As Doug McClelland laments in his fine paperback biography of the star, “she came on late and left early”.  In other respects, however, the film is a crackerjack thriller–intelligent, caustic and, perhaps, even genuinely surprising in its outcome.  In compensation for Susan’s limited footage, it also offers a performance by Rita Johnson–splendid but unsung and under-employed actress–worthy to start a brand-new cult.

“A skillful telling of a pretty nasty story about a man who loves money and women almost equally well, and finds that they get in each other’s way.  Mr. Young first falls for Jane Greer but drops her when his rich wife yanks at the leash.  She yanks him from Manhattan to Los Angeles and he tries to play safe in the new job she buys him.  Unfortunately, Susan Hayward glides out of a filing cabinet and in  no time at all he is a dishonest man again. …

Producer Joan Harrison and associates have brought the story to the screen with considerable skill.  Mr. Young and Miss Johnson are excellent.  Susan Hayward proficiently sells her special brand of sexiness.  Miss Greer is a comely beginner.  And many of the minor roles are more sharply drawn and cast than the leads.  The trial jury, for instance, may be caricatured, but it is frightening to consider that such a group holds in its hands a life even so patently worthless as Mr. Young’s.”

Interesting that Agee doesn’t call Hayward “miss” like the other ladies.  But then the film’s narration sums her up without formal politeness: “she looked like a very special kind of dynamite, neatly packaged in silk and lace”.