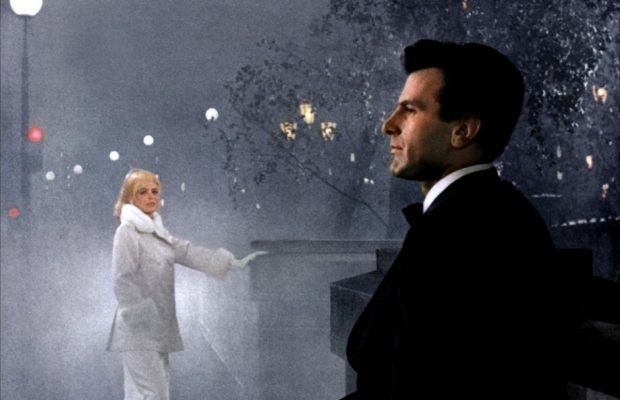 Toronto Film Society presented Topkapi  (1964) on Monday, August 29, 2016 in a double bill with The Penguin Pool Murder as part of the Season 69 Summer Series, Programme 7.

Peter Ustinov won his second Academy Award playing Arthur, an insufferable Englishman recruited as a driver by a group of international jewel thieves.  He’s seen here as another of life’s born losers, a lowly tourist guide in an obscure Greek town, whose vanity does not allow him to resist driving a fancy limousine.  When Ustinov’s name was announced as the winner by Angela Lansbury, comedian Jonathan Winters came up to claim the Oscar in his absence.  You can view that amusing little scene on YouTube which TFS posted on its Facebook page.

Melina Mercouri, who married Jules Dassin, the director of TOPKAPI in 1966, was born in Athens in 1923.  She was the granddaughter of a mayor of the city and the daughter of a politician and sometime minister of the Greek Interior.  She married at the age of 17 but found it dull although she didn’t get around to divorcing her first husband until 1942, 21 years later.  She wrote her autobiography I Was Born Greek in 1971.  She was also nominated for a Golden Globe Award for Best Actress under the category of Motion Picture Musical or Comedy.

And keep a look out for director Jules Dassin who has a small uncredited role as a Turkish Cop in tonight’s film.

The main object of the film, a dagger, is actually a famous piece of art, crafted in 1747 as a gift to the Persian King Nadir Shah.  However, the dagger never made it into his hands as he was killed in an uprising before the Ottoman emissary delivering the gift had crossed the border into Iran.  The dagger features three unusually large emeralds in its handle, rows of diamonds and a mother-of-pearl covering.

Elizabeth Lipp (Mercouri) on a visit to Istanbul becomes fascinated by the emerald-encrusted dagger of Sultan Mahmud I in the Topkapi Palace and, after leaving Turkey, recruits her ex-lover, Swiss master-criminal Walter Harper (Schell) to attempt to steal it. They hire associates to carry out particular tasks, but a search at the border by Turkish customs discovers firearms intended for use in the theft. The authorities assume that the gang plan an assassination, and decide to keep watch on them, recruiting small-time crook Simpson (Ustinov) for the task. The gang then proceed to carry out the planned robbery, with unexpected consequences.

Critics found the film more light-hearted and even comical than Jules Dassin’s 1955 suspenseful, French-made heist film Rififi, with its famous half-hour robbery scene shot in near silence, without dialogue or music. The New York Times praised Topkapi‘s “extravagantly colorful decor and brilliantly atmospheric setting” filled with “elegance, richness and romance”, and other critics called it “one of the highlights of the ’60s caper-comedy boom”–along with Charade, Arabesque, and How to Steal a Million“–clever, stylistically showy and deliciously tongue-in-cheek”, with Peter Ustinov’s performance (which won him an Academy Award as Best Supporting Actor) singled out for particular praise.

Often assumed to be French because of his name and the fact that several of his films were made in France, Dassin was actually American by birth and nationality; born in Connecticut, his family was of Ukrainian and Polish-Jewish extraction. He grew up in Harlem and joined the US Communist Party in the 1930s, but left, disgusted by the Nazi-Soviet Pact, in 1939. He had a brief acting career in Yiddish theatre in New York, and then moved to Hollywood, where he was an assistant to Alfred Hitchcock before becoming a director with MGM. After several routine pictures there, he moved to Universal, where he worked with the producer Mark Hellinger on two of the finest films-noir of the period: the prison drama Brute Force (1947), starring Burt Lancaster, and the neo-realist police thriller The Naked City, filmed almost entirely on the streets of New York. After Hellinger’s death, he made the racketeering melodrama Thieves’ Highway (1949). At this time, however, he was denounced by fellow directors Frank Tuttle and Edward Dmytryk for his long-expired Communist sympathies and was summoned to appear before the House Committee on Un-American Activities, where, unlike Tuttle and Dmytryk, he refused to testify against his Hollywood colleagues and was blacklisted. He was able to complete another thriller, Night and the City, in 1950, starring Richard Widmark, and filmed atmospherically in London, but was no longer able to find film work in America and left for France in 1953. After a period of unemployment, he was able to make Rififi  in 1955 (see above), which was an international success; he was awarded the Best Director prize at the Cannes film festival in 1956. It was there that he met the Greek actress Melina Mercouri, who he married in 1966, and developed a strong interest in Greece. This was followed by He Who Must Die in 1957, set in a Turkish occupied Greek village in 1921, but, with the exceptions of Never on Sunday (1960) and Topkaki, his later films were considered over-literary, pretentious, and uncinematic. He and Mercouri were active in Greek politics in opposition to the military dictatorship of 1967-1974, and lived abroad until this ended.

She was born and grew up in Greece and attended the National Theatre’s Drama School, graduating in 1945. Mercouri worked in the theatre until 1950, when she moved to Paris and continued her stage career there, before returning to Greece in 1955. Her first film, Stella, was directed by Michael Cacoyannis, and several subsequent films, such as Never on Sunday and Phaedra, were directed by Dassin. She also worked with Joseph Losey, Vittorio De Sica, and Norman Jewison, among others, often winning or being nominated for major international acting awards, while continuing her stage career in Greece and on Broadway. Her political activity during the years of the Greek military junta led to her becoming a member of the Greek parliament, in 1977, and then the first female Minister of Culture of Greece, where she argued vigorously, but unsuccessfully, for the return of the Parthenon Marbles to Athens from the British Museum.

Born Peter Alexander von Ustinov in London, of Russian and Jewish descent, he was a man of many talents–filmmaker, actor, novelist, playwright, theatre and opera director and stage designer, broadcaster and chat-show guest on radio and television, newspaper and magazine columnist, wit and humourist, chancellor of Durham University, and recipient of a knighthood in Britain in 1990, as well as acting as a Goodwill Ambassador for UNICEF and serving as President of the World Federalist Movement from 1991 until his death. He spoke English, French, Spanish, Italian, Russian, and German fluently, as well as some Turkish (useful for Topkapi) and modern Greek.

He was born in Austria, the son of an actress and a father who was a poet, novelist, and playwright. The family fled Austria when Hitler annexed the country, and took refuge in Switzerland. At the end of the war, Maximilian attended university in Germany, where he studied philosophy and art history; then returned to Zurich and attended university there, before deciding to become an actor. He made his film début in 1955, in a German anti-war film starring Klaus Kinski, where he portrayed a young deserter disillusioned with fighting. After several more films, he was invited to act in a Broadway production and then made his Hollywood début in the anti-war film The Young Lions, co-starring with Marlon Brando and Montgomery Clift, in 1958. After a brief return to Germany for stage appearances, he won the Academy Award for Best Actor in 1961, for his role as a defense attorney in Judgment at Nuremberg, directed by Stanley Kramer. He then began to produce and direct his own films, often on German themes, while continuing an acting career in Hollywood, sometimes playing Jewish characters such as Anne Frank’s father, as well as a variety of less politically motivated roles, as with Topkapi. His prolific later career in both Europe and America included roles in The Odessa File, The Man in the Glass Booth, Julia, and Sam Peckinpah’s Cross of Iron, as well as portraying Vladimir Lenin in the television film Stalin, for which he won a Golden Globe award.

One of the busiest actors of his time, he was also a director and a playwright, whose greatest success as a writer was the play Edward, My Son (1947), a hit in both London and New York, which he co-wrote and in which he also acted, but was made into a disappointing film by George Cukor in 1949. Morley, with his portly and jowly figure, tended to be typecast in both comic and serious roles in such plays and films as Oscar Wilde (1936), Major Barbara (1939), The African Queen (1951), Beat the Devil (1954), and the 1960 film version of the 1930s Oscar Wilde stage play.

One of the finest and most influential cameramen in European films of the mid-20th century, especially for his use of black and white, but who fell out of favour with the more improvisational style of the New Wave directors like Godard and Truffaut before finding rehabilitation for his use of colour in such films as Topkapi.

An important British author of thrillers and spy novels, who introduced a new realism to the genre and whose books were frequently filmed. These include The Mask of Dimitrios, Journey into Fear, and The Light of Day–the basis of Topkapi, though the structure of this book was considerably altered in the film, especially in the omission of the book’s flashbacks, which help to clarify some of the characters’ background and motivations.