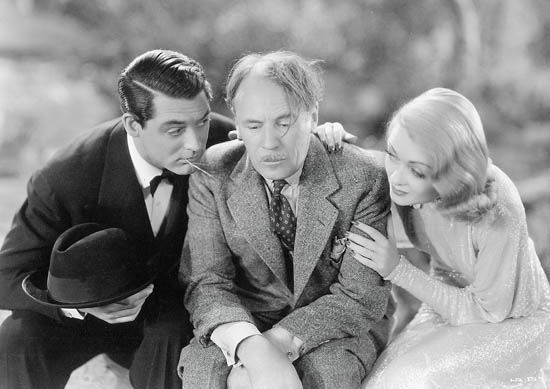 Toronto Film Society presented Topper (1937) on Monday, January 23, 2017 in a double bill with Mr. Peabody and the Mermaid as part of the Season 69 Monday Evening Film Buff Series, Programme 5.

Constance Bennett was impressed enough with the property that she agreed to be paid less than her usual $40,000 fee.

The commercial and critical success of the film Topper led director Norman Z. McLeod to include much of the principal cast in his next film, Merrily We Live (1938). Constance Bennett, Alan Mowbray, and Billie Burke all received major parts in that film, with Mowbray reprising his role as a stuffy butler and Burke again playing the matriarchal head of a household.

Arthur Lake, the elevator boy, went on to star as Dagwood Bumstead in the “Blondie” movies and TV series.

The car driven by Cosmo Topper is a 1936 Lincoln Model K and the fancy finned-back car driven by the Kerbys was custom-built by the Bohman & Schwartz Co. using a 1936 Buick Roadmaster chassis. The producers had considered using a coffin-nosed Cord, but it wasn’t large enough; the Buick had special compartments for camera equipment and the like. The Buick resembled a Cord, but the supercharger pipes on the side were just decorations, while the Cord came with an actual supercharger. After filming, the Buick was bought by the Gilmore Oil Co. and used for promotional purposes for many years. It was updated in 1954 with a Chrysler Imperial chassis and drive train.

A gossamer light fantasy-comedy of two ghosts interfering in the life of milquetoast Roland Young. The entire cast sparkles in this most engaging comedy. – Barry Chapman

[The] technical ease with which the motion pictures can make characters instantaneously appear and disappear from the screen always has tempted producers and screenwriters to delve, sometimes seriously, sometimes humorously, into stories which invade the field of the spiritualistic and occult.  Of such were Earthbound, directed by T. Hays Hunter; One Glorious Day, by James Cruze (both silents), and two recent sound films, Noel Coward in The Scoundrel, by Ben Hecht and Charles MacArthur and Robert Donat in The Ghost Goes West, produced by Alexander Korda.

Now comes Hal Roach, heretofore identified with obvious action comedy and, with the assistance of Norman McLeod as director; he has produced as weird and baffling a tale of spiritualism as the screen ever has seen.  It is entitled Topper, from a story by the late Thorne Smith.  It is carefully made, excellently photographed, and adroitly employs mechanical illusions of cinematic composition and trick sound effects.

How substantial the fan support will be in terms of box office dollars is difficult to anticipate.  None of the other films of similar theme aroused more than mild enthusiasm among a small group who patronize the arty theatres and talk about pictures in terms of art expression.  The rank and file of theatregoers will experience difficulty in following strange and surprising twists of the story, and are not likely to distinguish easily the passages of realism from the sequences of unreality.- Variety