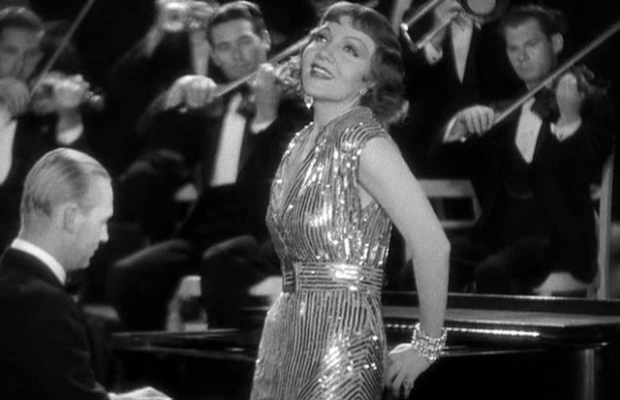 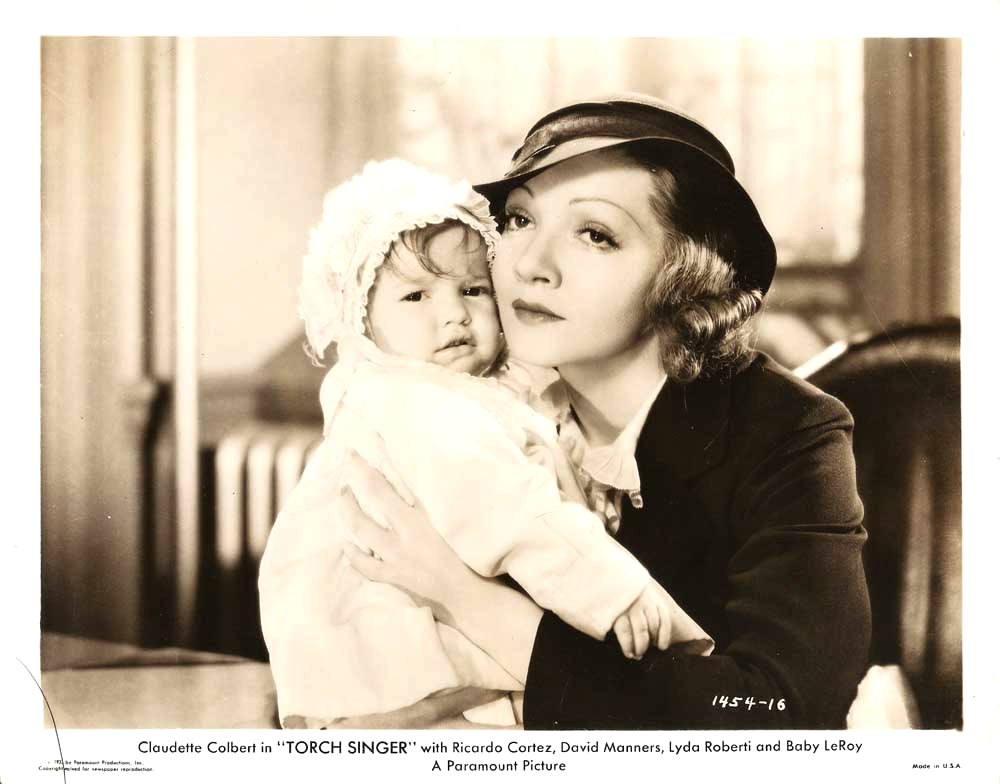 Told that she’s “hard” in Torch Singer, Claudette Colbert responds, “Sure I am. Just like glass. So hard that nothing can cut it but diamonds. Come around with a fistful sometime—maybe we can get together.” Colbert’s sexy, assertive performance makes this pre-Code, unwed-mother drama captivating.

Colbert plays Sally Trent, who is destitute when she gives birth to a daughter and is forced to give up the child even though the father is a wealthy man. Under the name of Mimi Benton, Sally climbs to fame—first as a sexy nightclub singer and then as the much-loved hostess of a children’s radio show. Her character’s double career gives Colbert an opportunity to sing (in her own throaty voice) both torch songs—such as “Give Me Liberty or Give Me Love”—and children’s songs. A tag line in the movie’s ads reads: “Lips that had kissed more men than she could remember…crooned lullabies no one could forget.” Despite the movie’s short running time, Colbert also manages to weave some comedy scenes into the soapy story, which has her using the radio as a means of finding her long-lost daughter and eventually confronting the child’s father. Upon completion of filming, Colbert presented David Manners with a signed photograph inscribed, “To David, from the other end of the comedy team – Claudette.” Many years later, Manners recalled of his fun-loving co-star that, “When we tried to do a scene, we broke up laughing.”

Also in the cast are: Polish actress Lyda Roberti, who was to die tragically of a heart attack five years later, at age 31; Baby LeRoy, who became the youngest actor to receive star billing in a film and retired from movies at age 4; and Ricardo Cortez, who had been groomed as a possible successor to Rudolph Valentino and went on to enjoy a subsequent career as a leading man and character actor. Cortez would later say of Torch Singer: “I remember that film chiefly because of Claudette…. I saw her transform the picture through sheer dynamism and force of personality.” 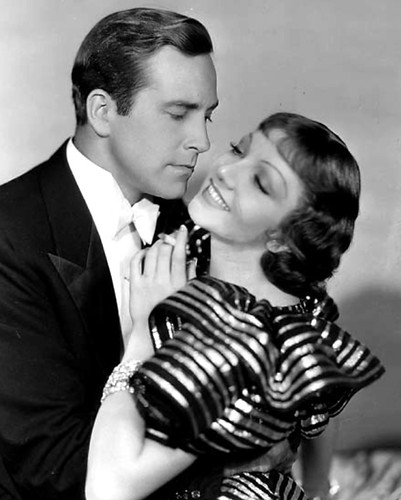 His father spent eight years as headmaster of Halifax’s prestigious Harrow House school before uprooting his family for a publishing job in New York City. Young Rauff seemed destined to follow in his father’s footsteps, which is perhaps why, at the age of 19, he moved back to Canada to study forestry at the University of Toronto. These studies proved too dull for his liking; he gravitated more to campus stage life, making his professional debut in 1924 at Hart House in Euripides’s Hippolytus. When he returned to New York and despite his father’s objections, he continued acting on Broadway, in Chicago, and with two ex-pat Brits—Basil Sydney’s Touring Company and Eva Le Gallienne’s Civic Repertory Company in New York.

Manners moved to California at the beginning of film’s sound era, like so many stage actors of the time. And, like gay men everywhere at that time until far later, he remained strictly closeted. He even had a brief lavender marriage (1929-31) to a woman named Suzanne Bushnell. Manners made his screen debut in a small part in The Sky Hawk (1929), but his career really took off after being “discovered” by ultra-gay film director James Whale at a Hollywood party. Whale gave him a feature role in the popular picture Journey’s End (1930) and from there Manners worked almost nonstop, appearing opposite such leading ladies as Katharine Hepburn, Barbara Stanwyck, Myrna Loy, Loretta Young, Helen Chandler, and Ann Dvorak.

Hepburn, making her debut in RKO’s A Bill of Divorcement in 1932, said of him: “David was a big star. I was no nervous working with him [but] he was just a dear to work with and a totally professional and talented actor.” Lucille Ball, then a lowly “Goldwyn Girl” dancer in the 1933 musical Roman Scandals, also admired and appreciated Manners: “David wasn’t in the one scene I did in Roman Scandals, but he watched every scene shot. He was tremendously enthusiastic, and he invited me to supper. He was mobbed everywhere. All the time he kept telling me I had style and personality. He said if I persevered I’d get somewhere in Hollywood. Not once did he ever hint that he’d like to take me home to his boudoir…. He was so utterly charming.”

Manners is best known today for his starring roles in 1931’s Dracula, playing good guy Jonathan Harker opposite vampire Bela Lugosi, and 1932’s The Mummy as archaeologist Frank Whemple fighting off a frightening Boris Karloff. Up until his death, Manners still received fan mail from horror movie fans, a fact that did not personally thrill him. He claimed never to have seen Dracula, said he didn’t care to, and begged people not to send him videos of it.

Even though he had starring roles in many popular films—including a turn as Eden Whiteoak in Jalna (1935), based on the hit book series by Canadian author Mazo de la Roche—Manners found himself turned off by Hollywood’s fakery. He retired from movies in 1936, going back to the stage for another 17 years, painting, and writing books. In 1940, he officially changed his name to David Joseph Manners and became a citizen of the US. He was a staunch conservative Republican. In 1948, he met the love of his life, playwright Frederic William Mercer. They remained partners until Bill’s death in 1978. Twenty years later, Manners died in a Santa Barbara care home at the age of 98.