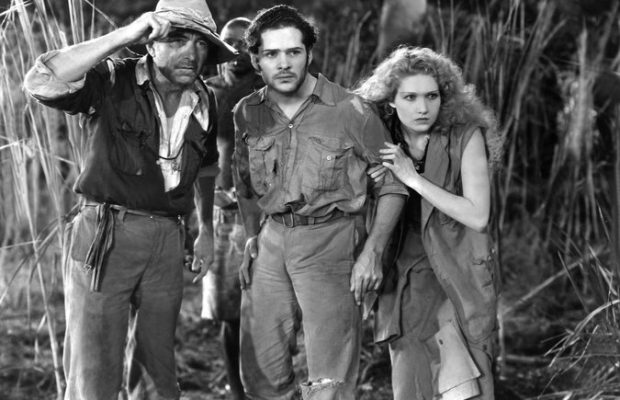 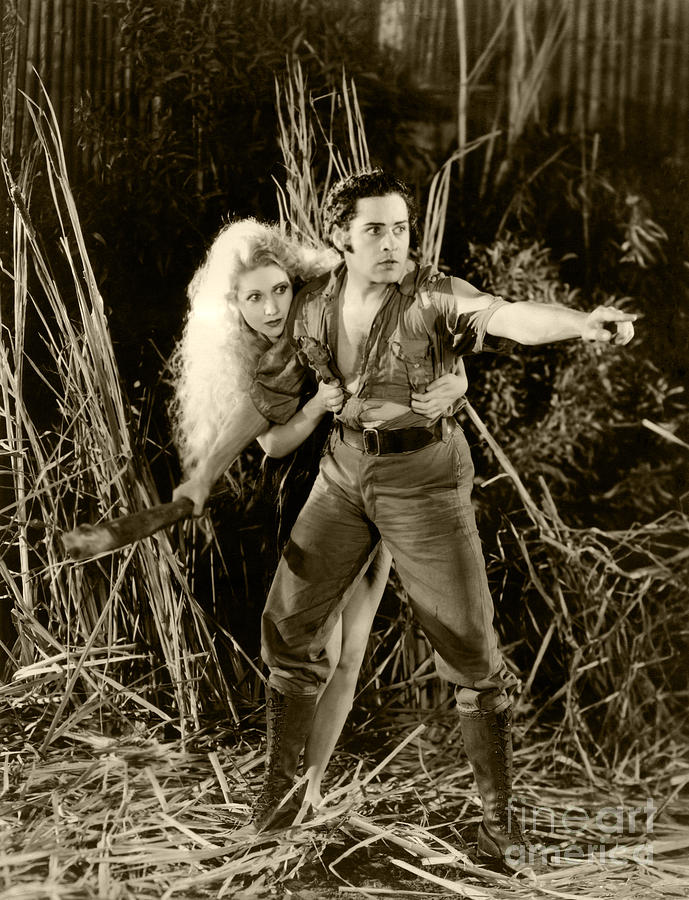 Alfred Aloysius “Trader” Horn, an ivory trader in central Africa, was born Alfred Aloysius Smith in Preston, UK in 1861 and died in his 70th year in 1931 in Whitstable, England.  He told his story, Trader Horn: A Young Man’s Astounding Adventures in 19th-Century Equatorial Africa detailing his journeys into jungles teeming with buffalo, gorillas, man-eating leopards, serpents and “savages” to Ethelreda Lewis in 1927. The book also documents his efforts to free slaves, meet the founder of Rhodesia, Cecil Rhodes, and liberate a princess from captivity.  The biography, Tramp Royal: The True Story of Trader Horn was written by Tim Couzens and published in 1992.

The film based on his life, Trader Horn, had begun shooting as a silent in 1929 but since the talkie era had begun, sound equipment was soon brought to Africa.

Harry Carey plays Trader Horn and at the age of 53 he is not what anyone in any time period would consider a young man.  However, his protégé, Peru, was and he was played by Duncan Renaldo, an actor I had not heard of or seen before although he’s been in 73 productions and I discovered was best known from the mid-50s on as TV’s Cisco Kid.

Since I hadn’t read either of the books above, I can’t say which scenes were actually in the original memoir or what had been written into the script by the writers for MGM.

The racism is not subtle.  Trader Horn knows more about Africa then the Africans do.  I like the actor Harry Carey, mostly having seen him in Westerns, but I found his demeanour here at times overbearing; yet I realize the real life Trader Horn must have known the land quite well.  Plus, he is the one telling us the story.  Perhaps we can even accept that he knows more about the different terrains and tribes collectively than each tribe knows about what goes on outside his own domain, but it strikes us that, as a Caucasian, he thinks he knows best about Africa and Africans more than any of the men who work for him do.  (He does mention that he knows Africa better than any White Man.)

With regard to the men who carry his equipment, you can’t help but notice that they aren’t treated much better than cattle, maybe even less so.  As well Horn’s guide, Rencharo, played by Mutia Omoolu, treats the men under his supervision not much better than his employer; in fact, it’s rather discouraging to see his unkindness.  We can only surmise that it’s to show “who is boss” under the head boss, the White Man.  And not surprisingly, these men have no dialogue and just do what they are told.  If death occurs for any one of them, it’s no great loss—except perhaps to those who must carry the extra equipment.

And equally disturbing is watching the animals shot for sport.  I’m not sure you can even call it “sport”.  When they stumble among some of the groups of a wild species, it’s shooting time.  You feel that if this attitude wasn’t the norm only 88 years ago, then the world would have a lot less endangered species.  However, in current documentaries, it’s still a known fact that ivory has continues to be a much-coveted commodity for people who have no scruples and can afford it.  In this film, as in the Tarzan films of the 30s (speaking of which, the first one, Tarzan the Ape Man, was also directed by Van Dyke in 1932) killing elephants for their tusks appears to be readily accepted.

Although these moments appear unbelievable, there are as well many wonderful authentic African scenes.  It will also be obvious when any inserts into these scenes were shot at the MGM studio.

The actress, Edwina Booth, who plays in the latter part of the film was also someone I had never heard of before.  She played in very few films, the only one that I’d seen where she had an “undetermined role” was the silent 1929 Our Modern Maidens.  And she’s quite a beauty, if a very bossy one; yet when she joins the White Men, her female Hollywood wiles take over.

Reading about Edwina Booth, although she had a long life—she lived until the age of 86—she had a very short film career and was exclusively known for her role here in Trader Horn.  Apparently, when she left for Africa, she already had a fever of 104.  While there, she had to cope with heat, insects and getting cut by elephant grass while wearing clothing made of monkey fur and lion’s teeth.  On top of that, she contracted malaria along with suffering from sunstroke.  Being scantily clad and with what looks like no protection from the sun, this likely increased her susceptibility.

After returning to Hollywood, it took her six years to fully recover physically.  She sued MGM for over a million dollars, claiming she had been provided with inadequate protection and inadequate clothing during the shoot.  She claimed she had been forced to sunbathe nude for extended periods during filming.  The case was eventually settled out of court and although the terms were never publicly disclosed, the Brigham Young University archives indicate that she settled for $35,000, which would be about $600,000 in today’s money.

In my opinion, the scene of with the woman, Edith Trent, wandering around the African terrain for years, looking for her lost daughter is an odd one.  It’s interesting to note though that the actress who plays her, Olive Golden, is the real-life wife of Harry Carey.  She was his third and last wife, while he was her one and only husband.

At the fourth Academy Awards ceremony, Trader Horn was nominated for Best Picture but lost to Cimarron.

No matter, this film is still quite a remarkable piece of art based on a true story.  So now, please enjoy your trip to Africa. 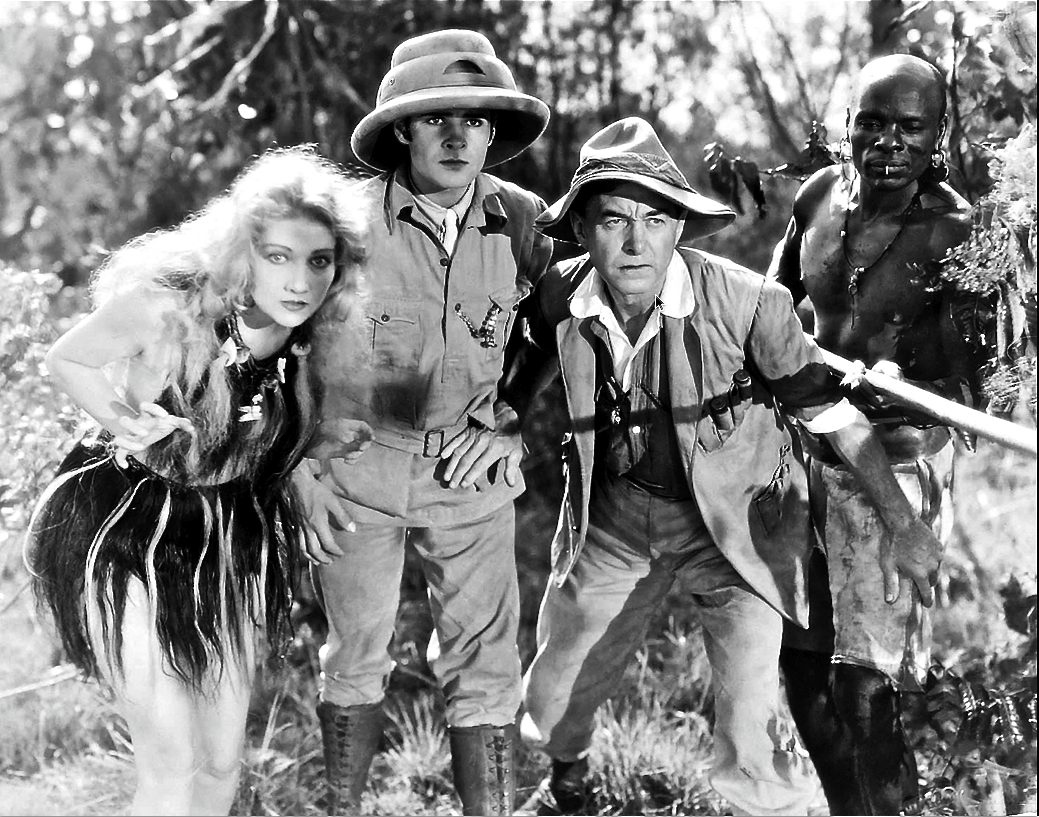 NO DOUBT ABOUT IT

Hollywood – Cedric Belfrage, the verbal dirt digger, describes the reactions of the two Trader Horn cannibals to cinemaland in this manner: “I am profoundly impressed by the innate wisdom of the two cannibals who are Hollywood’s honored guests just now.  You know whom I mean, of course—the two chappies brought all the way from British East Africa to play in Trader Horn. After they have been shown the wonders of Hollywood, and the glory thereof, an expression of great gloom was on their faces.  In order to cheer them up, somebody said: ‘But think of the wonderful things you will have to tell your friends about when you get home!’ One of the cannibal gentlemen, horror-struck, replied: ‘If we tried to describe this place, they would think we were possessed of devils and would kill us.’”

THE HORN WAS SILENT

Hollywood – Arriving on location without a sound head for the camera may be comedy to some, but it was near tragedy in the case of the Trader Horn company, which found itself in far-off Africa without the required sound head, although with thousands of dollars’ worth of other sound equipment. As the daily overhead was high, the picture was started in silent form—with the sound equipment necessarily remaining idle. The necessary sound head for the camera arrived about three months after the company had been on location. A silent film was retained so that sound could be spotted in at the studio later.

Edwina Booth, the Trader Horn girl, and Mrs. Duncan Renaldo, are probably soon to carry into court their argument over Duncan, if they haven’t done so already. This is a heart-balm matter, involving $50,000 asked by Mrs. Renaldo of the golden-haired luminary of the African story. The wife accused the actress of stealing away the affections of her husband under the tropical moon. Edwina, through a suit she lately filed, denied everything.

IS ROMANCE SYNTHETIC IN HOLLYWOOD?

Whether or not Edwina Booth and Duncan Renaldo imagined themselves in love while they were on location in Africa for Trader Horn seems to be a question for the courts, but after seeing the picture, I should think that, if there were any members of the company, the crew, or the denizens of that continent who were not smitten with the gorgeous blonde, they ought to have their heads examined. 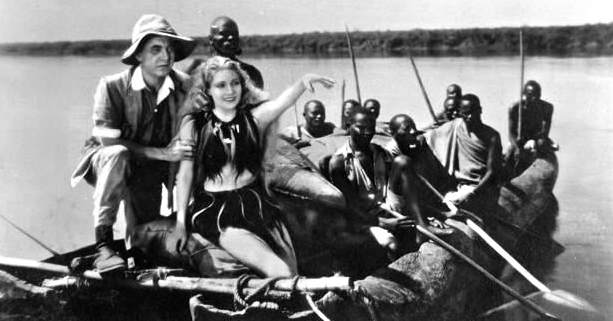 THE SCREEN IN REVIEW

A critical estimate of the latest pictures brings to light notable achievements and reveals old favorites and newcomers in performances that cause the rafters to ring with applause.

The best of all animal pictures, and by far the superior of all pictures filmed in Africa or purporting to have that locale, is interesting, unusual, and legitimately exciting. It shouldn’t be missed, especially by those who want to get away from the Hollywood product. They will see one of the genuine performances of the year from a man they have never heard of and probably will never see again—Mutia Omoolu, a native, who plays the loyal gun bearer to Trader Horn. He also contributes the most thrilling moment in the picture, when he spears a charging lion, and his death is the most poignant. But for that matter, our old friend Harry Carey, as the trader, is capital.

To him falls the lot of answering the ingenuous questions of his protégé, Peru, and thus acting as a guide who speaks the language of the spectator. This he does splendidly. Never didactic, always colloquial, he is entertaining and informative. Then, as the picture progresses, he becomes a brave and lovable old scout whose occasional tenderness always veers away from the sentimental.

With human interest given its due, Trader Horn must, however, be classified as an animal film. As such, it has no equal. Herds of giraffes and kangaroos are seen where only few have been photographed before; crocodiles swarm instead of appearing in twos or threes; and every animal of the country is caught off guard. A fight between leopards and hyenas; the slaughter of a gazelle by a lion and a battle for its carcass by a group of beasts; the killing of a rhinoceros—these are startling glimpses of wild life au natural, and they are made terrifying by sounds not of the earth as we know it. All this is a tribute to the director, W.S. Van Dyke, and that unsung hero, the cameraman, Clyde De Vinna, whose sense of beauty in capturing the strangeness and remoteness of the African interior is as great as his bravery in recording the realism of its animal life.

Duncan Renaldo is attractive as the accented hero, and old fans will be gratified by the brief, though effective performance of Olive Fuller Golden, who is Mrs. Harry Carey. The surprise of the cast is Edwina Booth, as Nina. Her role is difficult because it is frenzied and incredible. For a newcomer, she does extraordinarily well, though she forces an indulgent smile at her ease in emerging pearly white after weeks of hardship in the jungles.

There is something new and very favorable to be said for talking pictures. A few nights ago, I attended a showing of Trader Horn. Next to me, having chosen her seat with evident thought, sat a blind girl—totally blind. She enjoyed the performance as much as I. She heard the lion’s roar, men’s voices, a woman’s scream—knew the hush of the audience—knew, indeed, that a lion was attacking a woman in the picture, though her eyes saw nothing.

Certainly no one can deny that talking films have opened a broad and thoroughly enjoyable field to the countless “shut-off” blind people that live somehow in our large and uncaring cities. – Mrs. Chas. Brown, 342 West 88th St., New York City