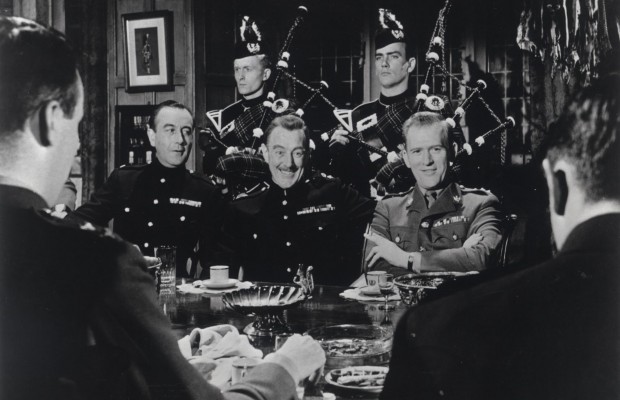 Toronto Film Society presented Tunes of Glory on Sunday, November 2, 1980 in a double bill with The Horse’s Mouth as part of the Season 33 Sunday Afternoon Film Buff Series, Programme 3.

Tunes of Glory, though concerned with the British Army, does not present it with the generally familiar extremes of sangfroid heroics, non-commissioned humour and empire carving.

Its basic situation–the clash between a battalion new commanding officer and his slack, eccentric predecessor–can be found in similar terms in every walk of life.  But here it is heightened by confining the action largely to the closed society of a bleak Scottish regimental depot, and in particular to the officer’s mess with its oppressive furnishings, martial relic and atmosphere of boorish camaraderie.  The retiring C.O. Jock Sinclair, is an unattractive mixture of easy-going discipline on parade and crude defensive bluster.  In his dealings with his officers, who unlike him have achieved commissions through Sandhurst rather than the pipe band.

Alec Guinness, red-wigged and moustached, swaggers through the part with fiery and raffish gusto…John Mills brings an edgy dignity and severity to the newcomer, Barrow, fresh from the War Office.  James Kennaway’s screenplay, based on his novel, is at its best in developing the conflict between the two men:  the awkwardness at Barrow’s arrival during a wild mess party with the enforcement of petty rules culminating in early morning classes to teach the officers to dance like gentlemen; Barrow’s neurotic outburst when they get out of line at the fist formal party…Ronald Neame’s direction neatly pinpoints the successive incidents to reveal the growing tension and intrigue within the mess.  (Sight and Sound, Winter 1960-61)

When I first saw Tunes of Glory I remember thinking what an out-and-out bastard Alec Guinness was (or, at least, the character he portrayed).  Not that John Mills is exactly loveable!

Probably it is his least sympathetic characterization, that is, aside from Hitler: The Last Ten Days!  The actor was, and still is, a favourite of mine and I recalled fondly, Great Expectations, Kind Hearts and Coronets, The Mudlark, The Lavender Hill Mob, The Man In the White Suit, The Captain’s Paradise and Father Brown, to name just a few.  Here he was, playing one of the most objectionable characters I had ever come across (and, no, I’m not forgetting Fagin).  I guess I couldn’t get over seeing my cozy view of the usually comic, often distinguished, Alec Guiness, being handed such a rude shock.  However, such is the art of the man, to my mind the finest English speaking actor around.  His characterization are always thoroughly convincing (boy, are they convincing!), no matter how small the part.  Certainly, his ‘walk-on’ in one of this year’s lesser efforts, Raise the Titanic, was probably the best thing in the film, aside from a rather good music score.

I mentioned convincing, although a Scottish acquaintance of mine saw tonight the film upon its release in Glasgow and said, at first, there were audible titters from the audience over Guinness’ assumed Scottish accent.  However, as the film went on, the characterizations took hold, and make no mistake about it, this is essentially the actor’s picture.  At the end it was warmly received.

Originally, Alec Guinness was to have the cultured officer-of-the-book role and John Mills was to be the uncouth officer-of-the-line, which to me seems more naturally suitable.  If such had been the case the judges at the 1960 Venice Film Festival might have given their Best Actor award to  Guinness rather than to Mills.  However, both lead actors do brilliant work and they are matched with an excellent cast.  Special mention must be made of the cool, snide, treacherous adjutant of Dennis Price.  Malcolm Arnold has done a marvellous job with the music, making fine use of the pipes, and Arthur Ibbetson has handsomely photographed the drama.  All together they do indeed conjure up cinematic Tunes of Glory.