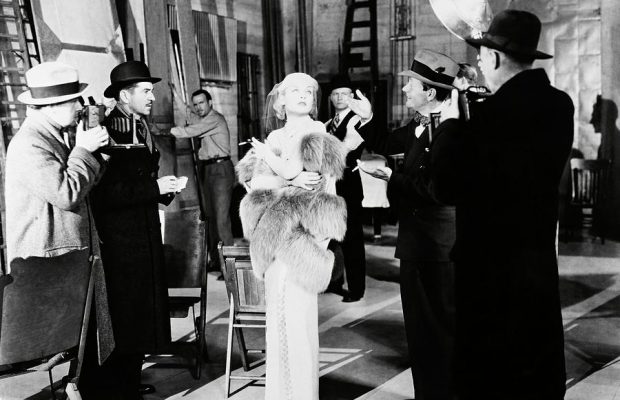 Toronto Film Society presented Twentieth Century (1956) on Monday, December 23, 1985 in a double bill with Lady on a Train as part of the Season 38 Monday Evening Film Buffs Series “B”, Programme 5.

All of the elements connected with Twentieth Century, the movie, pertain to speed, that most lasting of this century’s developments.  Ben Hecht and Charles MacArthur had written the Broadway play, “Twentieth Century”, in 1932, starring Eugenie Leontovich, the wife of the famous Russian/American director and character Actor, Gregory Ratoff, and Moffat Johnston.  Hawks, with Hecht and MacArthur, wrote the script for the film in five days in February of 134, filmed it in three weeks, and released it in early May of the same year.  Hecht and MacArthur had been responsible a few years earlier for The Front Page both on Broadway and on film–probably the fastest drama up to that time.  Hawks, of course, remade it in 1940 as another screwball comedy, and made it even faster, as His Girl Friday.

Twentieth Century retained the main storyline of the play, with an egotistical theatrical producer trying to woo back his former leading lady while on the Twentieth Century Limited train between Chicago and New York, but added a prologue establishing the closeness and clashes of the dizzy couple.  The result was one of the earliest and funniest screwball comedies of the 1930’s, a film that practically defined the genre, and was certainly the main example of its greatness. 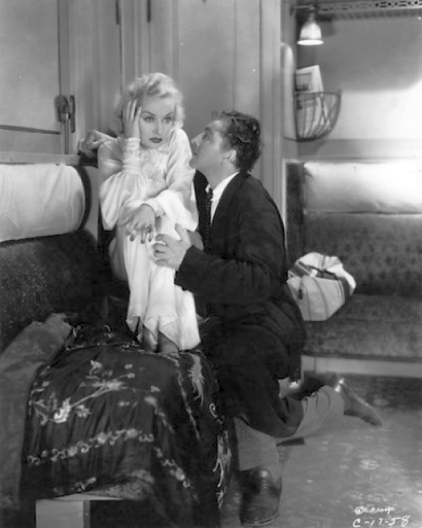 Twentieth Century was Lombard’s 34th feature film of 52 (she had worked in ten features and twelve Mack Sennett shorts before her starring role, High Voltage (1929)–(and available on video).  In most of her film appearances prior to Twentieth Century she was a stiff, ordinary actress, laying partial truth to Hawks’ claim that he made her into a movie star (Hawks stated that this was Lombard’s first [!] picture–yet she did a bit for him in his first film, The Road to Glory, in 1926).  Hawks: “And it was the girl’s first picture.  She was a second cousin of mine and an amazing personality who’d never acted and couldn’t act anyway.  I remember when we started working, I told her if she acted I’d fire her.  And she said, ‘OK, I’ll do anything that comes into my mind.’  I said, ‘That’s what I want you to do.’  She would just throw lines at him so fast that he didn’t know what to do sometimes.  It was so fast, I didn’t understand it part of the time.”

Barrymore had asked Hawks, “Mr. Hawks, just why do you think I would be any good in this picture?’, to which Hawks replied, “It’s the story of the greatest ham in the world, and God knows you fit that.”  Barrymore was later quoted: “There’s enough ham in me to let me imagine that old fellow.  I didn’t have to act to be Jaffe.  I needed only to close my eyes and live over again the happiest days of my life.  The character was so cleverly written that I could actually feel the peculiarities of such a man–a humbug, a faker, and a ham, but through it all, a man with a heart and soul.”