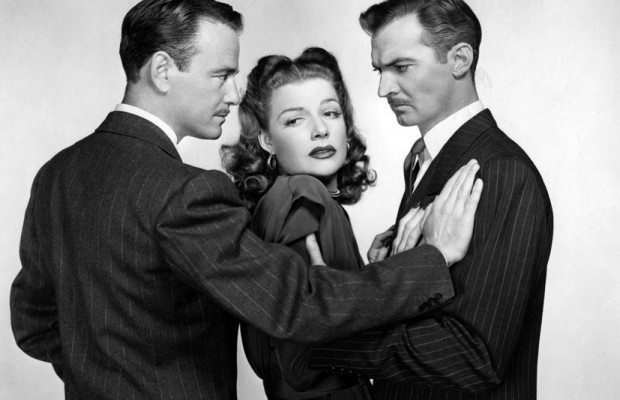 Toronto Film Society presented The Unfaithful on Sunday, January 19, 2014 in a double bill with Please Murder Me, as part of the Season 66 Sunday Afternoon Film Buff Series, Programme 4.

The film is loosely based on the original short story and play called The Letter by Somerset Maugham that had been twice filmed before, first in 1929, starring Jeanne Eagels, [shown in the TFS “Pre-Code” weekend in May 2013] and then in 1940, starring Bette Davis; but it is set in the USA rather than in the Malaya of the original work.

Chris Hunter stabs a man called Tanner in her home one night while her husband Bob is out of town and claims he was an intruder unknown to her. But a blackmailer called Barrow establishes that Tanner was a sculptor who had made a bust of Chris’s head, and then double-crosses her by taking the bust to Tanner’s wife, who then believes that Chris had an affair with her husband. Chris is charged with murder after admitting that she had previously had an affair with Tanner, and she is put on trial.

Like others, the New York Times gave the film a mixed review. “The Warner Brothers have turned out a better than average murder mystery…but they have badly over-weighted with melodramatics the things they obviously wanted to say about a pressing social problem. The new picture at the Strand stabs and jabs like a hit-and-run prizefighter at the subject of hasty divorces and the dangerous consequences to society of this ill conceived cure for all marital difficulties, but it never gets across a telling dramatic punch. However, through some uncommonly persuasive acting and skilful direction the patently artificial plot stands up surprisingly well.”

From an internet source: “This is a strange movie , both daring in subject matter and shackled by the censors. So a sculptor did a head of Ann Sheridan while hubby Zachary Scott was away in the war. Surely this ought to have been a full nude. Still, it captures the frustration of someone left alone for a long period, the anger of the person who expected her to be a dutiful Penelope, and most especially the nature of gossip when such things occur.”

While a student, she entered and won a beauty contest that allowed her a bit part in a Paramount film, and she then pursued a career in Hollywood, making her film debut in 1934, and then moving to Warners in 1936, where her career prospects improved. She was a popular pin-up girl in the early 1940s and appeared in numerous financially successful but forgettable films, though she had more substantial roles in such films as Angels with Dirty Faces (1938), Dodge City (1939), and They Drive By Night (1940). After success in I Was a Male War Bride in 1949, her film career declined and she appeared mostly in television afterwards.

After leaving high school without graduating, he worked as a musician, playing banjo and guitar, before deciding to pursue a career as an actor .He appeared with Greta Garbo in The Kiss,  but it was his role in All Quiet on the Western Front (1930) that made him a star, though this was followed a by a succession of largely mediocre movies for Universal, before he moved to Fox and then poverty row Republic, where he became a director for a time. He continued an acting career with MGM and made nine films in the popular Dr. Kildare series, among others. He declared himself a conscientious objector when drafted in 1942 , to considerable public outcry and debate, but was allowed to serve as a non-combat medic till 1946, where he performed with great distinction. He returned to acting for such films as Dark Mirror (1946) and Johnny Belinda (1948) and was nominated for an Academy Award for Best Actor in the latter film. He worked mostly in television in the 1906s0, though he appeared also in the films Advise and Consent and The Carpetbaggers.

He was married three times, first to actress Lola Lane, then (briefly) to Ginger Rogers, and finally and lastingly to Diana Hall.

After abandoning an initial plan to be a doctor like his father, he decided to switch to acting, first in England and then on Broadway, where Jack Warner signed him to appear in The Mask of Dimitrios (1944) and then Mildred Pierce (1945), where he began a successful career as a sleazy yet surprisingly debonair scoundrel in many subsequent films. He also worked for Jean Renoir in The Southerner (1945) and Luis Bunuel in The Young One (1960). His career began to decline after 1950 and he worked mainly for the stage and television before dying of a brain tumour at the age of 51.

He began his career as an actor on Broadway and later acted in films as well as directing them. He established a successful career for Warner Brothers, directing such films as Old Acquaintance and Mr. Skeffington (both with Bette Davis, with whom, as with Joan Crawford and  Rita Hayworth, he had aan affair). Other films included The Adventures of Don Juan (1948) and The Young Philadelphians (1959).

A prolific writer of pulp fiction whose work has been taken seriously in the English-speaking world only very recently, though he was much admired in France for his dark, hard-boiled stories and novels, many of which were filmed in that country–most notably by François Truffaut, whose 1960 Shoot the Piano Player was based on Goodis’ novel Down There. He worked for a time in Hollywood, where his novel Dark Passage was filmed, starring Humphrey Bogart and Lauren Bacall, in 1946 and he also worked on The Unfaithful and an adaptation of his novel The Burglar in 1957.Several of his almost forgotten novels have been reprinted by Black Lizard in recent years and the prestigious Library of America issued a volume of five of his novels in 2012.