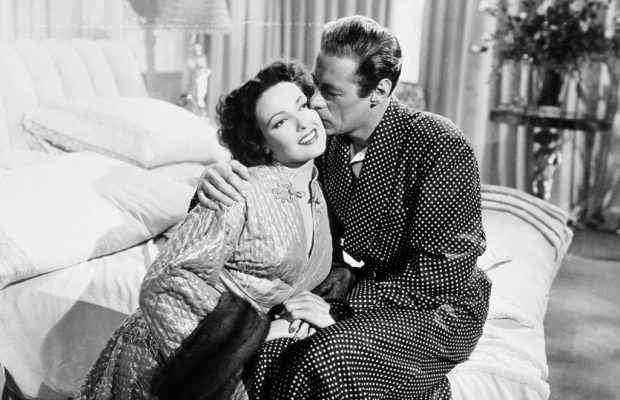 “Jones purified chase-and-action until it reached the perfection of the Coyote and Road Runner series that became America’s most popular cartoons.”  (David Rider, “That’s All Folks!”, loc. cit.)  Cartoons were to carry on the grand traditions of silent comedy, the comedy of violent action, destructiveness, mishappenstance, laugh-a-minute pace.  Nowhere is this better illustrated than in the Road Runner series for Warners, made entirely without dialogue.  There are even “titles” à la silent movies–the Latin names of the characters, the signs, the thousand-and-one unsuccessful gadgets that the Coyote buys from the ubiquitous Acme Company with their carefully-lettered boxes and instructions.

Without dialogue, the techniques of pure animation carry the ball.  A cartoon is carefully pre-constructed before a foot of film is shot and it is unusual to have more than a few frames edited out.  A musical score is recorded from the script and the animation is then made to match (since no orchestra could play to the split-second timing required).  The animation camera on its bench is capable of moving in the horizontal plane to produce “pans” and “tilts” in the ordinary way.  It can also move in the vertical plane to produce the effect of “close-ups”, “long-shots”, zooms”, etc.  Because the relative size of objects is the way we judge distance, by moving the camera vertically we can be fooled into seeing an object fly off into the distance or race towards us.  Also, objects can be painted on transparent sheets and moved through a background scene.  A cartoon, then, is far more than just a series of drawings.  It is the painstaking collaboration of animators, cameraman, scriptwriter, editor, soundman, musician, with the director seeing that all the pieces of this fantastically complicated jigsaw fit together.  Think about this as you watch the apparently carefree abandon of this cartoon.

The Road Runner cartoons bear a striking resemblance to some of the Laurel & Hardy techniques of comedy.  In both, part of our delight is knowing what’s coming.  Old gags are repeated, re-worked, turned inside-out.  We know the Coyote, thinking himself as devilishly clever as ever did Oliver Hardy, will come a cropper against the simple-minded insouciance of the Road Runner, but we just love to see how it will happen this time.  Ironically, it was animated cartoons that drove Laurel & Hardy out of the short comedy field and forced them into features where, by and large, they were less successful artistically.

“This famous satire was made in the experimental days of sound and was one of the first pieces of sustained dialogue to be recorded.”  (Museum of Modern Art note.)  How appropriate that one of the first uses of sound should be to present the comedy of the late Robert Benchley, an artist whose talent would have meant nothing without it.  His dry, rather diffident voice was to regale us with the ultimate in take-offs on the “lecture manner” right up to the ’40’s, in a series of classic comedies.  Although he played other movie roles, his “lectures” will be his memorial.  All of them were masterpieces of subtle timing, minute changes of expression and beautifully-written satire.  In this one, just as one thinks the ultimate is tragedy has been reached in the story of the polyp who died of frustration because he could not excite the button, Benchley caps it by sadly recounting that the Foundation would not finance another trip to the West Indies for him and his colleagues to procure another polyp.

Since Robert Benchley’s career is fairly well known, readers might be more interested in the unusual career of the director, Thomas Chalmers, who died just this June 11 at 82.  He began his career as an opera singer in 1911 and was the first American baritone to sing with the Met (1917).  In 1924 he began a 35-year career as an actor on stage and radio, during which he many times won critical acclaim.  Among his stage roles were Polonius in Maurice Evans’ “Hamlet” (1945), Simon Legree and Uncle Ben in “Death of a Salesman”.  From 1934 to 1952 he was Pepper Young’s father in the famous radio serial and he also did much radio drama.  With the coming of television, he began an equally illustrious career in that medium, including playing the lead in Tennessee Williams’ “The Last of My Solid Gold Watches” (Kraft Television Theatre, 1958).  Of most interest to us is his movie career.  He wrote, produced and directed shorts for Fox Movietone News and Pathé and when Movietone News made its first sound newsreel it was his resonant voice that spoke the slogan “Fox Movietone News – It Speaks for Itself.”  He produced and directed Benchley’s first movie, The Treasurer’s Report, earlier in 1928, and also other shorts including The Spellbinder.  He was the narrator of famous documentaries, for Pare Lorentz and others, The Plough That Broke the Plains (1936), The River (1937), T.V.A. at Work (1937) and The Bomber (1941).  It is appropriate that such an experienced actor should have directed a movie such as tonight’s, which depends for its effect entirely on the work of another actor, Robert Benchley.

When I first suggested the idea of this year’s Summer Series, I referred to the features in an unguarded moment as “romantic comedies.”  Even though this phrase was rather enthusiastically taken up and used by Ron Anger in his excellent “Laughter in August” piece announcing the series, I feel somewhat sheepish about it now, as, after due reflection, it seems to me that two of our feature comedies are about as anti-romantic as you can get!  One of these is Howard Hawks’ wonderfully astringent Twentieth Century, wholly imbued as it is with Ben Hecht and Charles MacArthur’s brashly disenchanted and irreverent attitude toward all conventions, certainly including the romantic.  the other is Preston Sturges’ Unfaithfully Yours, surely a “black” comedy in a sense, since it deals in part with a man’s fantasies of suicide and/or murdering his wife whom he suspects of adultery!

The late Preston Sturges first attracted critical attention with his urbane Broadway comedy “Strictly Dishonorable” which was quickly filmed.  He then worked for some years as a screen writer.  Some of his more notable scripts: The Good Fairy from the Ferenc Molnar comedy; Child of Manhattan from his own play; The Power and the Glory (years before Citizen Kane used off-screen narration by various characters and an out-of-sequence reconstruction of its hero’s life); and the Claudette Colbert and Jean Arthur comedies, Midnight and Easy Living.  Finally given the chance by Paramount to direct his own scripts, he turned out the series of fine comedies for which he is most famous–The Great McGinty, Christmas in July, The Lady Eve, The Palm Beach Story, Sullivan’s Travels, The Miracle of Morgan’s Creek, Hail the Conquering Hero.  Then, after The Great Moment, an odd but charming and interesting serio-comic movie about the inventor of dental anaesthesia, which Paramount chopped and changed against his wishes, he moved to Fox where he made tonight’s film, followed by an unfortunate Betty Grable romp called The Beautiful Blonde from Bashful Bend.  His stock fell sharply and his last picture, The French They are a Funny Race (The Notebooks of Major Thompson), though it had flashes of the old Sturges wit, was not well received.  He died in Paris after appearing in a small part in Preminger’s Bonjour Tristesse.

Unfaithfully Yours was a bit of a departure for Sturges and received mixed notices when it first appeared.  It had a more sophisticated, less light-hearted or semi-slapstick sort of humour than the critics and public were used to from him.  Perhaps it was ahead of its time, as its reputation seems to have increased with the years.  “Black comedy” has become considerably popular (e.g. Divorce Italian Style) and such critics as Pauline Kael now consider it among the best of American film comedies.  Penelope Houston of Sight and Sound called it “a comedy which was nearly brilliant, but not quite Sturges”.  New York’s Museum of Modern Art Film Notes say: “Sturges came to the screen from success as a playwright, but his cinematic antecendents are to be found in Sennett, Chaplin and Clair; here, the techniques and the timing of screen slapstick are applied to a sophisticated tale that provides hilarious commentary on the plans or mice and men.  Rex Harrison gives one of his finest performances.”

For what they are worth, here are a couple of reviews from 1948:

Time Magazine:
Sturges’ films have been noted for novelty and freshness (Hail the Conquring Hero) as well as for questionable taste (The Miracle of Morgan’s Creek).  This one is a brilliant idea for a two-reel comedy dragged out to feature length.  Sturges takes far too much footage setting the stage for his gag.  Rex Harrison is an aging, temperamental and gabby symphony conductor, madly in love with his beautiful wife; he suspects her, unjustly, of carrying on with his handsome young secretary.  Brooding over his jealousy as he conducts a concert (Rossini, Wagner, Tschaikowsky), he imagines himself solving his domestic triangle in three different ways: (1) by murder; (2) by generosity to the young ‘lovers’; (3) by suicide.  When he actually tries out the murder plot he has imagined so smoothly, he bungles it hilariously.  Having spent too long arriving at his gag, Sturges cannot resist overworking it.  The movie trips over its own snarled plot lines and falls flat.  But Harrison gives a sly, buoyant performance in a tough, wordy role; and some of Sturges’ whimsy and brisk dialogue are worth the wait through the dull spots.  In a cast heavy with ‘characters’, Edgar Kennedy, Lionel Stander and Rudy Vallee stand out; Vallee is especially good as a stuffed-shirt multi-millionaire.

The New Republic:
The art of slapstick, as everyone knows, is timing.  There is nothing funny about hitting a man over the head with a bladder, but if you beat him to the right rhythm you can reduce an audience to hysteria.  Sturges, one of Hollywood’s best prat-fall directors, must know this better than I do, but he has let it escape him in Unfaithfully Yours.  This farce based on a case of mistaken adultery builds intricately to a scene of frantic housebreaking which in turn sets the stage for one moment of shattering laughter.  The explosion is stupendous, but isn’t enough by itself to comprise a riotous evening.  Harrison, the butt of the great guffaw, plays an English symphonic conductor, with a title and a private fortune, whose family wealth derives from a popular but mildly embarrassing household remedy.  Since the film cannot possibly intend to satirize Sir Thomas Beecham, the coincidence is disconcerting.  Still the film does have the one laugh, plus several chuckles, Rudy Vallee as a thoroughly adequate stooge, and Linda Darnell as the obviously virtuous wife.  Considering what’s on the market these days, that adds up almost to a bargain offer.

Well, were these gentlemen altogether about Unfaithfully Yours‘ shortcomings?  Or has the film now vindicated itself?  We’ll leave it up to you!