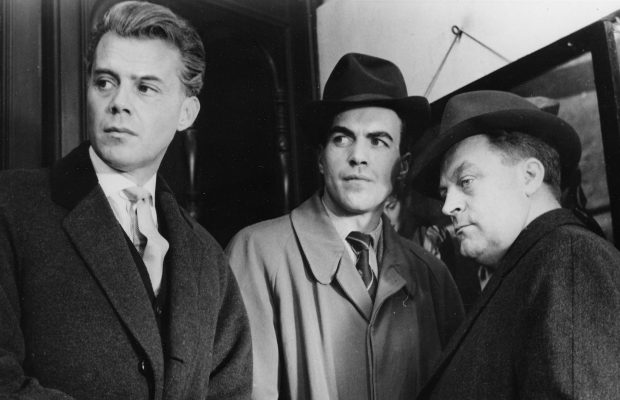 Toronto Film Society presented Victim (1961) on Monday, March 22, 1982 in a double bill with Freaks as part of the Season 34 Monday Evening  Film Buffs Series “B”, Programme 9.

Victim manages to get past other censorial bodies by being basically a thriller, a fairly slick suspense story about a blackmailing ring.  But it’s a cleverly conceived moralistic thriller: as the victims of the ring are homosexuals, various characters are able to point out the viciousness of the English laws, which by making homosexuality a crime, make homosexuals the victims of ninety percent of the the blackmail cases.  Just about everyone in the movie has attitudes designed to illuminate the legal problems of homosexuality; without the thriller structure, the moralizing message could get awfully sticky.  As it is, the film is moderately amusing.

A number of the reviewers were uneasy about the thesis that consenting adults should be free from legal prosecution for their sex habits; they felt that if homosexuality were not a crime it would spread.  (The assumption seems to be that heterosexuality couldn’t hold its own in a free market.)  Time‘s attitude to the film is a classic example of Time‘s capacity for worrying.

On one page Time is worried about the population explosion, and on the next it’s upset because homosexuals aren’t reproducing.  (An unwarranted assumption, by the way.)

Time should really be very happy with the movie, because the hero of the film is a man who has never given way to his homosexual impulses, he has fought them–thats part of his heroism.  Maybe that’s why he seems such a stuffy stock figure of a hero.  Oedipus didn’t merely want to sleep with Jocasta, he slept with her.

There is, incidentally, a terribly self-conscious and unconvincing attempt to distinguish between the ‘love’ the barrister feels for his wife and the physical desire–presumably some lower order of emotion–that he felt for a boy who is more interesting in every way than his wife.