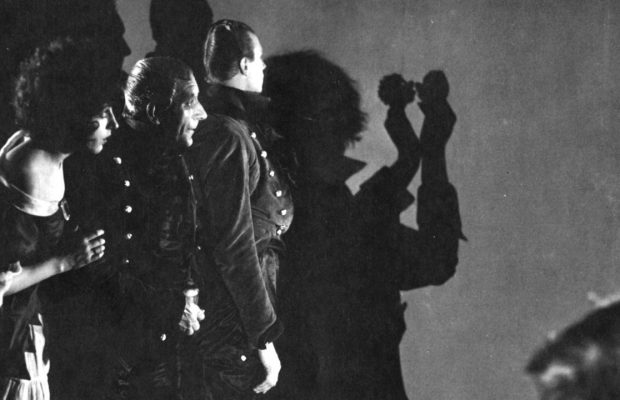 According to the MMA Film Notes, the first actual abstract films were made in 1921 by two painters with similar ideas about the principles of plastic expression, Hans Richter and Viking Eggeling.  Having worked for three years on scroll paintings, they simultaneously made the two pioneer films, Rhythmus 21 and Symphonie Diagonale.  The latter was an experiment to discover the basic principles of the organization of time intervals in the film mediu, “analogous to but in no sense dependent upon the abstract designs of Malevich and Klee”.  Rhythmus 21 features the square, because, says Richter, “I used the square as the simplest way of dividing the square film-screen, after I had discovered that our scrolls were paintings, following the laws of painting and not of filming.  The simple square gave me the opportunity to forget the complicated matter of our drawings and to concentrate on the orchestration of movement and time”.  “Simple or not”, says the MMA, “the rhythms of this distinguished film remain superior to the organization of all the hundreds of which it is the ancestor!”  Some of Richter’s other films: Ghosts before Breakfast, Dreams That Money Can Buy, 8 x 8 (the latter made a couple of years ago).  Referring to Rhythmus 21 and several similar films, Paul Rotha said “the abstract film is as far removed f rom the commercial fiction film as is surrealism from the Royal Academy.  It is a primary example of unity of filmic purpose.  It seeks to produce simple psychological reactions in the mind through the eye by the variation in rapidity of groups of abstract forms in movement, and by the relations of geometric figures changing their proportions, dissolving and displacing each other, thereby making visual abstract patterns.  The result on the mind may be compared with that produced by the word patterns of the post-war school of poets, to certain forms of literature such as the work of James Joyce, and to music without melodic interest.  The film, with its cinematic properties of rapid movement, contrast, comparison, thythm, expansion and contraction of forms, is admirably suited to present a series of abstract visual images to the eye, capable of causing strong emotional reactions.  A sequence of swift impressions, of little interest singly, but arranged in relation one to another, has powerful psychological meaning.”

A lyrical impression of a shower of rain in Amsterdam, this is one of the best known works of Joris Ivens.  Bardeche and Brasillach call it “a simple documentary that achieved extreme photographic perfection and possessed a rhythm the equal of Germany’s best pictures”.  Ivens became a documentarist of international stature with such films as this one, The Bridge, Breakers, Philips-Radio, Pile Driving, Zuider Zee, and New Earth, the latter introducing a vein of strong social protest which was further developed in The 400 Million (made in China during the Japanese invasion) and The Spanish Earth (made in Spain during the Civil War).  Later, his Communist sympathies led him into deterioration as an artist in such didactic and distorted post-war-II pictures as Song of the Rivers.  Happily, he seems to be back in form with The Seine Meets Paris, a beautiful movie soon to be shown by TFS Main Series.

One of many films involving dreams, visions or the supernatural made in Germany in this period (Caligari, The Golem, Destiny, Secrets of a Soul, etc.)  In his book From Caligari to Hitler, Siegfried Kracauer says of it: “To a large extent, Warning Shadows is nothing but an instinct film, which accounts for the marked role assigned in it to the display of lights and shadows.  Their marvelous fluctuations seem to engender this extraordinary drama.  In this story, a strolling juggler hypnotizes six persons (a jealous husband, his wife and her four ‘suitors’) so that they follow their shadows into the realm of the subconscious, and in a state of trance anticipate the future by doing exactly what they would do if their passions continued to determine their actions.  The drama develops into a ‘nocturnal hallucination’, a collective nightmare from which the characters eventually awake, now grasping the hidden springs and terrible issue of their present existence. (This magical therapy recalls model cases of psychoanalytical treatment.)  Their metamorphosis at the end of the film coincides with the beginning of a new day whose sober natural lighting splendidly symbolizes the light of reason.  (Kracauer considers this one of the very few German films of this period that showed a concern for reason.)  Even though it belongs among the masterpieces of the German cinema, Warning Shadows passed almost unnoticed.  Contemporaries may have felt that any acknowledgement of the healthy shock effect of reason was bound to result in an adjustment to the ways of democracy.  In a retrospective comment on the picture, its cameraman says: ‘it only found response from the film aesthetes, making no impression on the general public’.  But Robison’s expressive screen fantasy quivers with an excitement indicating the vital importance of the issues involved.”

Paul Rotha includes Warning Shadows among several German films of this era of which “it may be said without detriment to their directors that two-thirds of their aesthetic success lay in their design.  The credit for this unique work should be given equally to all the production unit; to Fritz Arno Wagner, the cameraman; to Albin Grau, the architect; and to Dr. Robison, as well as to the brilliant playing of the cast.  In 1922 the film was a remarkable achievement.  Its purely psychological direction, its definite completeness of time and action, its intimate ensemble were new attributes of the cinema.  It was a rare instance of complete filmic unity, with the possible exception of the unnecessary roof-garden scene.  The continuity of theme, the smooth development from one sequence into another, the gradual realization of the thoughts of the characters, were flawlessly presented.  It carried an air of romance, of fantasy, of tragedy.  Every filmic property for the expression of mood, for the creation of atmosphere, that was known at the time, was used with imagination and intelligence.  Its supreme value as an example of unity of purpose, of time, of place, of theme cannot be over-estimated.”  (Rotha mentions that the film was made without titles–save at the opening for the introduction of the characters–but that several “quite ridiculous and totally discordant captions” were inserted for its British presentation.  At the moment our MMA print has not arrived, so we don’t know just what to promise or warn you of in this respect!)

H.H. Wollenberg in 50 Years of German Film says: “In Warning Shadows light and shadow were handled in a masterly manner, making dream and reality merge into one another”.

Lastly, to quote the MMA Film Notes: “In Germany in the Twenties, influences from painting and from the expressionist theatre combined to create a kind of film in which stylized acting and settings drew the spectator into a nightmare world where the difference between dream and reality was ill-defined.  Like The Cabinet of Dr. Caligari, its more famous but less mature predecessor, this isolated masterpiece uses the familiar framework of the horror tale as a base for a Freudian study of human motivation.”

Next and Final Programme: An All-Pudovkin Show–Storm Over Asia and Chess Fever.