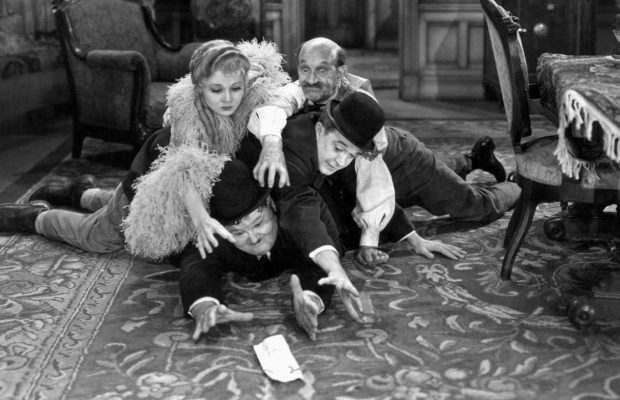 An Evening with Laurel and Hardy

This evening is devoted to the work of Stan Laurel and Oliver Hardy.  They were two of the most genuinely funny people who ever lived and as a team have never been equalled.  They did not follow the pattern of comedian and straight man.  Each had his own highly individual comedy style and these styles meshed miraculously.  Laurel was a great influence on the directing of their movies (he had been a director before teaming with Hardy) and had a unique concept of comedy production.  He was responsible for their movies being usually shot in sequence, so that comedy could be allowed to build naturally, and he also supervised the editing in most cases as well as writing or devising many of the gags and situations they used.

This is one of the earliest of the Laurel-and-Hardys, being only the third to be produced in which they were billed as a team.

Of all the great comedians of the silent era, Laurel and Hardy unquestionably made the most successful transition into sound.  The quality of their pictures showed no decline and they utilized sound for all it was worth–but as a tool, never as a master.  This was only their second sound movie, but there is no tentativeness in the style, none of the tendency to run off at the mouth that was so common in this period.  (Placed 21st in the international critics’ poll.)

This was the very next movie they made after Double Whoopee.  They decided to shoot this one on location–and just about demolished the location!  Jimmy Finlayson does a virtuoso version of his famous “double-take and fade away” in which he literally knocked himself out by hitting his head against the door frame.  (Placed 16th in the international critics’ poll.)

Arthur Stanley Jefferson, or Stan Laurel as he was later to be known, began his career in English music halls in 1907.  The son of a prominent showman, he was only sixteen when he joined the legendary Fred Karno troupe of vaudeville artists.  While with Karno, Stan appeared in “Mumming Birds”, a pure story-pantomime that is fondly remembered by vaudeville veterans on both sides of the Atlantic Ocean.  Some refer to it as the greatest ensemble act of the century.  One reason for this acclaim may have been the presence of Charlie Chaplin in the role of the drunk.  However, another reason may have been the performances of Chaplin’s understudy, who was to become famous in Hollywood as the physically thinner half of the great comedy team Laurel and Hardy.

The physically larger half of this lovable team was born in Harlem, Georgia, USA, in 1892.  Oliver Norvell Hardy was the son of a lawyer and, unlike Stan Laurel, a member of a non-show business family.  As a boy his hobby of watching people in hotel lobbies may have supplied him with many of the characterizations that occur in his films.  An early enthusiasm for music led him, while only eight years old, to tour as a soprano with a group called Coburn’s Minstrels.  Much later he studied at the Atlanta Conservatory of Music and, for a brief period, law at the University of Georgia.  In 1910 he opened the first movie theatre in Milledgeville, Georgia, and became more than interested in motion pictures.  This fascination with movies led to employment as a “heavy” in comedies produced by Lubin Motion Pictures at Jacksonville, Florida, in 1913.

Stan Laurel, who had been working the American vaudeville circuits for several years, made his first film in 1917.  Both Stan and Oliver worked separately in Hollywood until 1926, when they were paired together rather accidentally in the Hal Roach short Slipping Wives.  In the same year* the first Laurel and Hardy film was produced, entitled Putting Pants on Philip.  Altogether the Laurel and Hardy short films, both silent and talkies, totalled more than sixty.  In addition the boys appeared in twenty-seven feature-length films.  The last, and least fondly remembered by many people, was made in France in 1952.

*Other reliable authorities give the date of Putting Pants on Philip as 1928.

Erratum:  In The Fatal Glass of Beer (shown August 3), “Richard Krymar” should be Rychard Cramer.