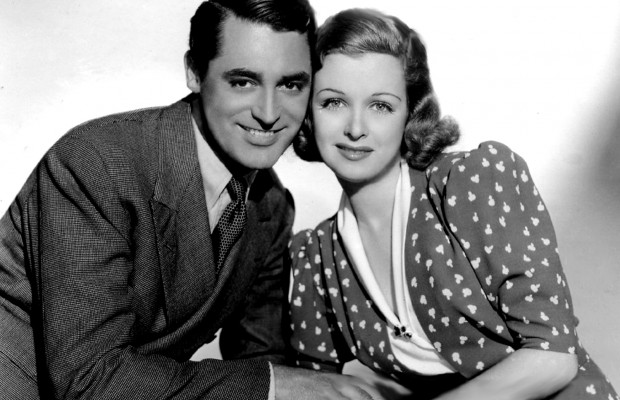 Toronto Film Society presented Wedding Present on Monday, October 15, 2012 in a double bill with The Rage of Paris, as part of the Season 65 Monday Night Film Buffs Series.

In 1936, at his home studio, Paramount, Cary Grant made two comedies with Joan Bennett, Big Brown Eyes and tonight’s film, Wedding Present.  Wedding Present is decidedly inferior, a would-be farce that offers few laughs and seemingly endless silliness.  Joan Bennett plays a newspaper reporter in love with Grant, an editor.  Their marriage plans present so many obstacles that she decides to jilt him and call the whole thing off.  In the heavy-handed proceedings that follow, Bennett becomes engaged to Conrad Nagel but she and Grant are finally reunited.

To the film’s credit, director Richard Wallace takes the uninspired Joseph Anthony screenplay at a fast pace.  The movie closes on a frantic note with Grant arranging to get Bennett “a real wedding present” in the form of a siren-blasting fire engine, on which they ride off.  Here, producer B.P. Schulberg unwisely cuts costs to the extent of using ancient street-scene footage showing antique cars and women in cloche hats, with speeded-up action that results in a rather disconcerting finale.

Wedding Present also ended Cary Grant’s contract with paramount.  Politely but firmly, he informed the studio that he wasn’t going to renew, on any terms, he wished to free-lance.  Grant claims he was Hollywood’s first free-lance actor and admits that it was a big step to take, adding “Only Mae West and Marlene Dietrich were permitted to choose their parts at Paramount, and I was fed up with what I was doing.  It didn’t turn out too badly.  Without a contract, I pushed my money up to $300,000 a picture in no time.”

Richard Wallace (August 26, 1894 – November 3, 1951) was an American film director.  In 1926, Wallace began directing feature-length films. He began working in the editing department at Mack Sennett Studios in the early 1930s. He later moved on to rival Hal Roach Studios where he began directing two-reel films, some of which he collaborated with Stan Laurel.  He was a founding member of the Directors Guild of America.

Cary Grant (born Archibald Alexander Leach, January 18, 1904 – November 29, 1986), was an English-born American film actor. Known for his transatlantic accent, debonair demeanor and “dashing good looks”, Grant is considered one of classic Hollywood‘s definitive leading men.  Nominated twice for the Academy Award for Best Actor, for Penny Serenade (1941) and None But the Lonely Heart (1944), and five times for a Golden Globe Award for Best Actor, Grant was continually passed over, and in 1970 was given an Honorary Oscar at the 42nd Academy Awards. Frank Sinatra presented Grant with the award, “for his unique mastery of the art of screen acting with the respect and affection of his colleagues”.

Archibald Alexander Leach was born at 15 Hughenden Road, Horfield, Bristol, England, to Elsie Maria Kingdon (1877–1973) and Elias James Leach (1873–1935). An only child, Leach had an unhappy upbringing, attending Bishop Road Primary School. His mother had suffered from clinical depression since the death of a previous child. Her husband placed her in a mental institution, and told his nine-year-old son only that she had gone away on a “long holiday”. Believing she was dead, Grant did not learn otherwise until he was 31 and discovered her alive in a care facility. When Grant was 10, his father abandoned him after remarrying and having a baby with his new young wife.

Grant was expelled from the Fairfield Grammar School in Bristol in 1918. After joining the “Bob Pender Stage Troupe”, Leach performed as a stilt walker and traveled with the group to the United States in 1920 at the age of 16, on a two-year tour of the country. He was processed at Ellis Island on 28 July 1920.

When the troupe returned to the UK, he decided to stay in the U.S. and continue his stage career. During this time, he became a part of the vaudeville world and toured with Parker, Rand and Leach. Still using his birth name, he performed on the stage at The Muny in St. Louis, Missouri in such shows as Irene (1931); Music in May (1931); Nina Rosa (1931); Rio Rita (1931); Street Singer (1931); The Three Musketeers (1931); and Wonderful Night (1931). Leach’s experience on stage as a stilt walker, acrobat, juggler, and mime taught him “phenomenal physical grace and exquisite comic timing” and the value of teamwork, skills which would benefit him in Hollywood.

Joan Geraldine Bennett (February 27, 1910 – December 7, 1990) was an American stage, film and television actress. Besides acting on the stage, Bennett appeared in more than 70 motion pictures from the era of silent movies well into the sound era. She is possibly best-remembered for her film noir femme fatale roles in director Fritz Lang‘s movies such as The Woman in the Window (1944) and Scarlet Street (1945).

Bennett had three distinct phases to her long and successful career, first as a winsome blonde ingenue, then as a sensuous brunette femme fatale (with looks that movie magazines often compared to those of Hedy Lamarr), and finally as a warmhearted wife/mother figure.

In 1951, Bennett’s screen career was marred by scandal after her third husband, film producer Walter Wanger, shot and injured her agent Jennings Lang. Wanger suspected that Lang and Bennett were having an affair, a charge which she adamantly denied.

In the 1960s, she achieved success for her portrayal of Elizabeth Collins Stoddard on TV‘s Dark Shadows, for which she received an Emmy nomination (1968). For her final movie role, as Madame Blanc in Suspiria (1977), she received a Saturn Award nomination. In her ‘New York Times’ obituary she was said to be “…one of the most underrated actresses of her time”.

For twelve years, Bennett was represented by agent Jennings Lang. She and the onetime vice-president of the Sam Jaffe Agency, who now headed MCA‘s West Coast television operations, met on the afternoon of December 13, 1951, to talk over an upcoming TV show.

Bennett parked her Cadillac convertible in the lot at the back of the MCA offices, at Santa Monica Boulevard and Rexford Drive, across the street from the Beverly Hills Police Department, and she and Lang drove off in his car. Meanwhile, her husband Walter Wanger drove by at about 2:30 p.m. and noticed his wife’s car parked there. Half an hour later, he again saw her car there and stopped to wait. Bennett and Lang drove into the parking lot a few hours later and he walked her to her convertible. As she started the engine, turned on the headlights and prepared to drive away, Lang leaned on the car, with both hands raised to his shoulders, and talked to her.

In a fit of jealousy, Wanger walked up and twice shot and wounded the unsuspecting agent. One bullet hit Jennings in the right thigh, near the hip, and the other penetrated his groin. Bennett said she did not see Wanger at first. She said she suddenly saw two livid flashes, then Lang slumped to the ground. As soon as she recognized who had fired the shots, she told Wanger, “Get away and leave us alone.” He tossed the pistol into his wife’s car.

She and the parking lot’s service station manager took Lang to the agent’s doctor. He was then taken to a hospital, where he recovered. The police, who had heard the shots, came to the scene and found the gun in Bennett’s car when they took Wanger into custody. Wanger was booked and fingerprinted, and underwent lengthy questioning.

“I shot him because I thought he was breaking up my home,” Wanger told the chief of police of Beverly Hills. He was booked on suspicion of assault with intent to commit murder. Bennett denied a romance, however. “But if Walter thinks the relationships between Mr. Lang and myself are romantic or anything but strictly business, he is wrong,” she declared. She blamed the trouble on financial setbacks involving film productions Wanger was involved with, and said he was on the verge of a nervous breakdown. The following day Wanger, out on bond, returned to their Holmby Hills home, collected his belongings and moved. Bennett, however, said there would not be a divorce.

On December 14, Bennett issued a statement in which she said she hoped her husband “will not be blamed too much” for wounding her agent. She read the prepared statement in the bedroom of her home to a group of newspapermen while TV cameras recorded the scene.

Wanger’s attorney, Jerry Giesler, mounted a “temporary insanity” defense. He then decided to waive his rights to a jury and threw himself on the mercy of the court. Wanger served a four-month sentence in the County Honor Farm at Castaic, 39 miles north of Downtown Los Angeles, quickly returning to his career to make a series of successful films.

Meanwhile, Bennett went to Chicago to appear on the stage in the role as the young witch Gillian Holroyd in Bell, Book, and Candle, then went on national tour with the production.

Bennett made only five movies in the decade that followed, as the shooting incident was a stain on her career and she became virtually blacklisted. Blaming the scandal that occurred for destroying her career in the motion picture industry, she once said, “I might as well have pulled the trigger myself.” Although Humphrey Bogart, a longtime friend of Bennett’s, pleaded with the studio on her behalf to keep her role as Amelie Ducotel in We’re No Angels (1955), that movie proved to be one of her last.

As the movie offers dwindled after the scandal, Bennett continued touring in stage successes, such as Susan and God, Once More, with Feeling, The Pleasure of His Company and Never Too Late. Her next TV appearance was in the role as Bettina Blane for an episode of General Electric Theater in 1954. Other roles include Honora in Climax! (1955) and Vickie Maxwell in Playhouse 90 (1957). In 1958, she appeared as the mother in the short-lived television comedy/drama Too Young to Go Steady to teenagers played by Brigid Bazlen and Martin Huston.

She starred on Broadway in the comedy Love Me Little (1958), which ran for only eight performances.Wikipedia