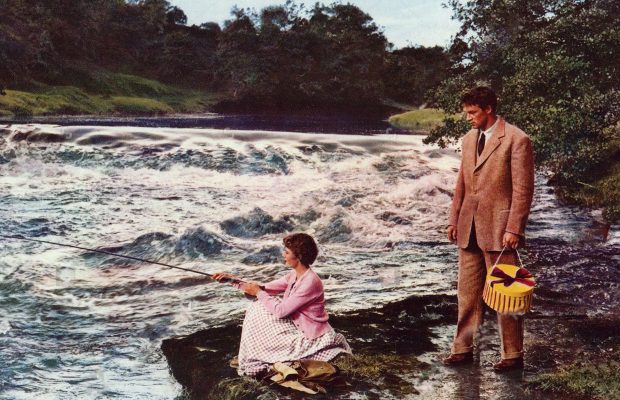 Tonight’s second film is of a breed which, alas, does not seem to be with us anymore: the gentle, kind-spirited British comedy.  Certainly the recently-released A Fish Called Wanda (a nasty, thoroughly unfunny and unpleasant film) bears no connection with it other than having been filmed int he same country.

It is the picture that made a star of big, bluff Bill Travers as the stubborn and unsophisticated hammer thrower from the Scottish Highlands who enters the Australian Olympics.  Wee Geordie must have been a great success, for I recall it playing for weeks on end in Toronto–probably at the late, lamented Carlton Theatre 32 years ago.

The title, of course, reflects typical British humour and understatement, for Wee Geordie is anything but small.  It would be easy to say that Travers simply played him as a big dumb lug, but this would do a disservice to Travers, a skille actor who realized that, unless he brought some quirks and shadings to his character, he would be a bore.

As a result, he had the satisfaction of appearing in a major hit, and it seems likely that Travers will always be remembered as the brawny Scottish athlete.  Holding his own against Alastair Sim, a veteran scene stealer from way back, must have been quite a task.  Sim, of course, with his patented mannerisms–his battery of twitches and scowls, his sudden alarming grins, his awful pauses–was in fine form as the eccentric laird who becomes Geordie’s benefactor.  Edinburgh-born, he started out as a tailor in his father’s firm, but an interest in the theatre intervened. 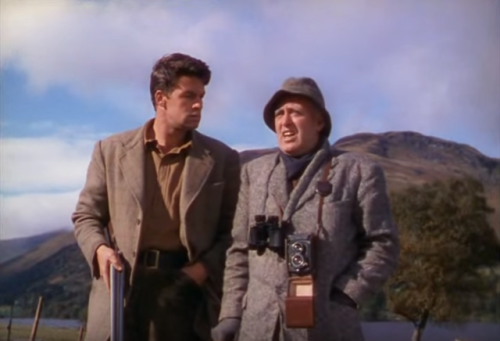 Sim made his first film in the mid-1930s, and for the next 40 years devoted most of his acting to the screen.  He appeared in a tremendous number of British films over the years, including This Man is News, shown at TFS recently.  In that picture, early in his career, Sim’s Scottish accent was more pronounced than it would be later.  Among his best-known films are Stage Fright for Hitchcock, Hue and Cry, Green for Danger, The Belles of St. Trinnians, and of course, as Scrooge in A Christmas Carol.

Bill Travers, who married actress Virginia McKenna, appeared in a number of British films in the decade or so after Wee Geordie, but never came close to equalling that part.  He was a good actor, but not really versatile enough to progress beyond rugged he-man roles; in 1957’s The Barretts of Wimpole Street, he seemed ill at ease and out of place as poet Robert Browning, and compensated by over-acting strenuously.  His last major role was in the mid-Sixties in Born Free, where he shared the screen with his wife and the famous lion.  (Travers fans will also remember the delightful and enchanting 1969 film, Ring of Bright Water in which Travers again shares the billing with an animal star, this time an adorable wild otter.)

Travers’ leaving lady in Geordie was a pretty red-haired actress with the very unglamourous name (it must have been her own) of Norah Gorsen.  She certainly wouldn’t have lasted long in Hollywood without changing her moniker.   However, the name notwithstanding, Miss Gorsen gave a bright, spunky performance as Geordie’s girlfriend, as stubborn and determined as he, and ready to give up her muscular Romeo when she thinks he has tired of her.

Fortunately for filmgoers, Wee Geordie was filmed in Technicolor, which captured the beautiful hills and glens and lochs of Scotland against which the story unfolds.  The British studios, I think, were slower to embrace colour than Hollywood, probably for economic reasons, due to the more limited market potential of their pictures.  Right up to the late 1950s, major productions were still being filmed in black and white.

Variety (September 28, 1955) praised the team of Launder and Gilliat for their experienced touch with a script of essential naivete and rural innocence: “…the very naivete of the principal characters gives the subject the necessary warm human values and right degree of sentiment.”