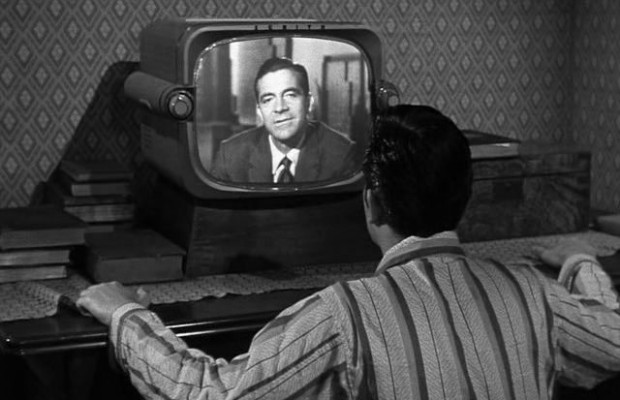 Toronto Film Society presented While the City Sleeps (1956) on Monday, February 19, 1990 in a double bill with Deadline U.S.A. as part of the Season 42 Monday Evening Film Buffs Series “B”, Programme 6.

The similarities between Fritz Lang’s M (1931) and the much later While the City Sleeps are more apparent than real.  Although both films deal with the search for a psychopathic sex murderer, M focused on the murderer’s psychology while While the City Sleeps is more concerned with the psychology of those who join the hunt for him.  As Lotte Eisner has written, the film “exposes the world of American newspapers and the sensational press, the treachery and disloyalty that can divide friendly colleagues caught up in the rat race for position….The other people involved…are more incurably ill than the murderer, driven on and on against one another by “the bloody spur of ambition” and senseless competitive rivalries.”

The plot of While the City Sleeps is as follows.  A psychopathic sex murderer preys on attractive young women.  Dubbed the “Lipstick Killer” by the Sentinel, a New York tabloid, the murderer attracts attention.  Walter Kyne, Jr. (Vincent Price), publisher of the Sentinel, offers a top executive to the man on the staff who can solve the murder.  The veteran managing editor, the head of the news service, and the chief of the photo service engage in a frantic competition for the post.  In their pursuit of the job and the murderer, they reveal the depth of their own greed and ambition.

An interviewer once told Lang he found the newspeople in the film more objectionable than the murderer.  Lang’s reply was to the point: “You are very romantic.  They are human beings….These people do exactly the things you probably do yourself but which you detest: running after a job, greedy for money.  How many people have you met in your life who are ethical?  So what do you expect from these people in While the City Sleeps?”

Watch for Mae Marsh, D.W. Griffith’s former leading lady, in one of her last roles as the killer’s mother.