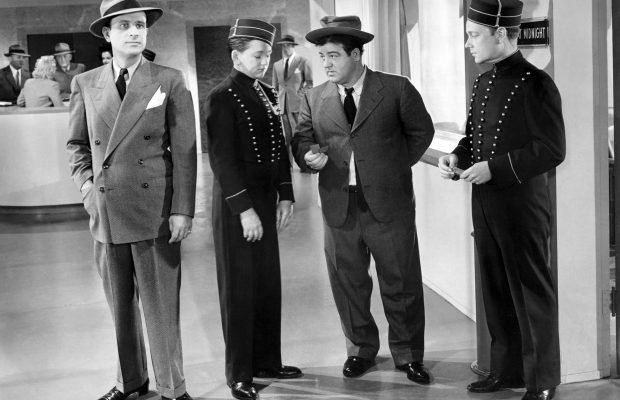 In Scott Allen Nollen’s “Abbott and Costello on the Home Front: A Critical Study of the Wartime Films” he mentions some interesting facts about Who Done It?.

Lou had intended to dedicate tonight’s film to his idol Charlie Chaplin, who at that time and to Costello’s great elation had invited him to dine at his Beverly Hills home.  They had even discussed a potential future project with Costello buying the rights to Chaplin’s 1921 The Kid, with Chaplin directing while Lou recreated Charlie’s character from the original film.  However, this project never came to be once Chaplin was deported from America due to his leftist political beliefs.  Personally, I can’t image it would have ever come to fruition nor can I imagine Lou Costello in Chaplin’s role.

Throughout their film career, Bud and Lou weren’t concerned with watching the dailies or shooting retakes.  Due to their frequent improvisations, dialogue sometimes had to be dubbed to provide a transition from one shot to the next.  You will notice this in tonight’s one botched scene when Bud reminds Lou that “There’s the girl you gotta make love to” and where Mary Wickes response of “Do you want me to be your Juliet?” doesn’t match her mouth movement.

The original ending to this film has Lou as Mervyn falling into a huge air conditioner, where he becomes encased in a block of ice.  However, it was changed to what you will see tonight.  Pat Costello acted as his brother’s stunt double in all the dangerous shots in this and several of his other films.

No doubt inspired by Wheeler and Woolsey’s hilarious 1935 comedy The Nitwits, Abbott and Costello’s Who Done It? is an exciting mystery-comedy that casts the boys as soda jerks at Radio Center who yearn to become mystery writers. When the network president (Thomas Gomez) is electrocuted during a broadcast of the Murder at Midnight program, the boys set out to solve the crime and get their own radio show.

With the release of Who Done It? late in 1942, Bud and Lou ranked as the country’s top box office attractions of the year, more popular than such stalwarts as Clark Gable and Mickey Rooney. And there are no cumbersome musical numbers to slow up the action, and the boy-girl subplot is less intrusive. The plot also manages to work in one of the team’s most hilarious skits—“Alexander 222”, in which Costello tries desperately to call that number, but the nasal-voiced operator keeps telling him that the line is busy. While he waits, a group of oddballs parade into the phone booth, making crazy, long-distance calls with no difficulty. Red Skelton used a similar sketch to great effect in Ziegfeld Follies (1946).

The team is ably supported by a better than average cast. Patric Knowles and Louise Allbritton are very attractive in straight roles. Knowles was a fine actor and one of the few leading men in the Abbott and Costello film that you could care about. The rest of the cast includes such stalwarts as William Bendix, William Gargan, Mary Wickes, Thomas Gomez, Jerome Cowan and Don Porter.

Patric Knowles (born 1911) appeared in a few British films before making his Hollywood debut in 1936. That same year he played with Errol Flynn and Olivia de Havilland in The Charge of the Light Brigade, and in 1938 in The Adventures of Robin Hood. His first film for Universal was The Wolf Man (1941). Knowles also appeared in Hit the Ice (1943) with Bud and Lou.

Louise Allbritton (1920-1979) later appeared in Son of Dracula (1943) and The Egg and I (1947). She retired from the screen several years after her marriage to CBS news correspondent Charles Collingwood.

Mary Wickes (born 1916) played the heckled nurse in the stage and screen versions of The Man Who Came to Dinner (1941), then was signed by Universal to a term contract following her performance in Private Buckaroo (1942). Mary also appeared in Now, Voyager in 1942. She is in Bud and Lou’s final film Dance With Me, Henry (1956).

William Gargan (1905-1979) had worked with Bud and Lou in Keep ‘Em Flying (1941). Since then, he had starred in three Ellery Queen mysteries at Columbia. In the 1950s he starred on TV as private eye Martin Kane. In 1960 he was diagnosed with cancer of the larynx and had his voice box removed, forcing his retirement. He became a spokesman for the American Cancer Society in a campaign against smoking.

The New York Times critic Bosley Crowther made the boys the subject of his editorial on the Sunday following the review of Who Done It?. He described the film as “the sort of threadbare nonsense that two of the most amiable clowns to come along in a coon’s age are given to play.” He went on to write: “It is to this watcher’s way of thinking, a distressing and inordinate waste. For here are two lovable zanies—one of them is lovable, anyhow—who could, with some fresh and fast material, make the liveliest picture anyone could wish. The fact that they still manage to be funny and make the audiences laugh with gags of the moldiest nature is the token of their talents and appeal.”