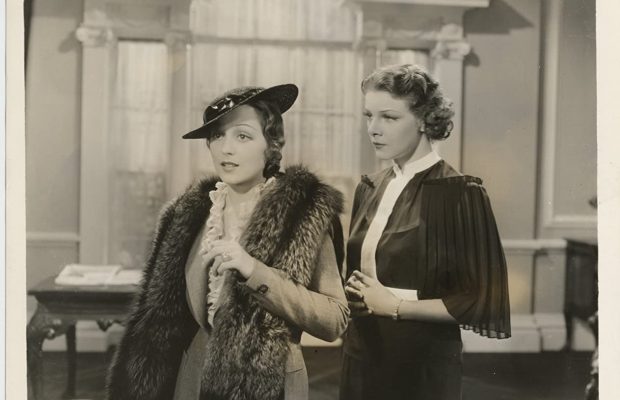 Toronto Film Society presented Without Regret (1935) on Sunday, March 12, 1989 in a double bill with Leave Her To Heaven as part of the Season 41 Sunday Afternoon Film Buffs Series “B”, Programme 6.

Among the various hits produced at Paramount in 1935, including Enter Madame (starring Elissa Landi as a wildly temperamental opera star), Mae West in Goin’ To Town, Von Sternberg’s The Devil is a Woman (which Marlene Dietrich, perhaps in jest, called her favourite film), the brilliant Leo McCarey’s Ruggles of Red Gap (with Charles Laughton) and the box-office pairing of Myrna Loy and Cary Grant in Wings in the Dark, Without Regret cannot be taken too seriously except as an interesting example of how the Hollywood studios were eager to devote time and money on remakes of their previous successes.  The 1935 version of Without Regret reprises, in a fairly loose adaptation, Paramount’s earlier film, titled Interference, which was historically important as the studio’s first all-dialogue feature in 1928.  The 1928 version, Interference, was a big hit, although fraught with all the difficulties encountered in the earliest talkies.  The history of this first film is somewhat complicated by the fact that Lother Mendes, often credited as the director of this talkie, was in fact handling a simultaneous silent version of the story.  The 1928 Interference was in fact directed by Roy Pomeroy, with William C. deMille around “helping and observing”.  Pomeroy was lucky to have a sterling cast of experienced professionals, including Clive Brook Evelyn Brent, William Powell, Doris Kenyon, Brandon Hurst and Clyde Cook, who were more than capable of handling the dialogue by Ernest Pascal from a screenplay by Hope Loring.

The original play, by Roland Pertwee and Harold Dearden, told the complicated story of a murdered adventuress (Evelyn Brent) who had been blackmailing the wife (Doris Kenyon) of her former lover (William Powell), thought to be dead by his wife who had remarried (Clive Brook).  Although a commercial success, the film reveals a cast that seems immobilised by “microphone paralysis”, even though the actors were particularly adept at talking, which the director let them do continually.

The 1935 version Without Regret, adds some bizarre adventure elements to the melodrama of villainy.  Elissa Landi (in the Kenyon role) is kidnapped by bandits while travelling in China, only to be protected by the drop-dead-gorgeous Kent Taylor who is an independent pilot who has hired himself out to the bandits.  Landi marries Taylor, to the chagrin of his former girlfriend, Frances Drake, and eventually becomes a widow when Taylor is killed in a plane crash.  Once Landi is conveniently remarried, Taylor and Drake re-appear bearing all the horrors of bigamy to Landi.  The melodrama proceeds from anguish to murder, demanding ever more “willing suspension of disbelief” on the part of the spectator.

Harold Young (1897-1970) worked his way up in the ranks of filmmaking, from cutter to editor and finally received his big break with the direction of The Scarlet Pimpernel in 1935, after the original director, Rowland Brown, left the film.  Young had made a name for himself for his brilliant editing for Alexander Korda, starting with The Private Life of Helen of Troy in 1927 and working thereafter exclusively for Korda in Europe and America.  After the mid-30s, Young’s career began to declien as he was given increasingly less important vehicles to direct such as Juke Box Jenny (1942), I Escaped From The Gestapo (1943), Machine Gun Mama (1944) and finally a small film which featured the Brooklyn Dodgers, in 1954.

Elissa Landi, born in Italy to Austrian parents, began her career on the London stage in 1924 and made regular appearances there until 1930 when she came to Broadway as Catherine in A Farewell to Arms.  From there she made films during the 30s, appearing in The Count of Monte Cristo (1934), Enter Madame (1935), After The Thin Man (1936), The Thirteenth Chair (1937), until her final film, Corregidor in 1943, after which she returned briefly to Broadway and continued her career as a novelist.  (An interesting note to Toronto audiences is the fact that both Landi and the film’s other star, Frances Drake, were educated in Canada–Landi by private tutors, and Drake at Havergal College in Toronto).

Kent Taylor, one of the many terribly handsome suave British suitor-type actors, appeared in 1934 in Death Takes a Holiday as Corrado, Evelyn Venables boyfriend.  Paul Cavanagh was also a stage actor who made much of his debonair, moustachioed leading man looks to make the move to Hollywood films, often in costume, and had his “classiest” role in Goin’ To Town (1935) as Mae West’s leading man.  Cavanagh also appeared in A Bill of Divorcement (1932), The Kennel Murder Case (1933), Curtain at Eight (1934), Splendor (1935), Wings in the Dark (1935) and Thunder in the Night (1935).  His career, albeit minor, managed to last until 1959 when he played in The Four Skulls of Jonathan Drake and The Beat Generation.  Frances Drake, whose name was changed from Dean to avoid any conflict with another Paramount actress named Frances Dee, had her Hollywood debut in 1934 in Bolero and ended her career as an actress in 1940 in I Take This Woman.  Having married the son of the 19th Earl of Suffolk in 1939, Drake undoubtedly decided to devote herself to more “civilized” pursuits.  Among all of these relatively marginal players we find David Niven in his first film as more than an extra.  In his autobiography, Niven describes this era in true British fashion: “My social life was picking up nicely but my professional career was not in top gear.”  Within a year after Without Regret, Niven was getting good parts in such films as Beloved Enemy, The Charge of the Light Brigade and The Prisoner of Zenda.