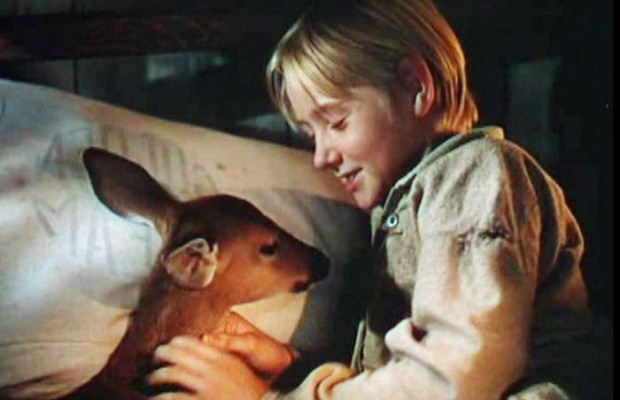 Toronto Film Society presented The Yearling on Sunday, November 30, 1980 in a double bill with Sand as part of the Season 33 Sunday Afternoon Film Buff Series, Programme 4.

Clarence Brown was not only the director of Gable and Garbo, he also created two of the wisest movies ever made for children–and for the lucky adults who accompany them–National

Velvet and The Yearling.  Both are rare and precious jewels in the neglected genre of children’s movies, and they stand with the best of Brown’s work.  Like the finest children’s movies (The Wizard of Oz comes to mind), they are also guaranteed to wring dry the cynical heart of any clear-thinking adult.  They are, perhaps, also the movies that are dearest to the director; after all, he does frequently list the two films as among his personal favourites, and none of his other, more famous films have quite the same involved intensity that distinguishes National Velvet and The Yearling.  True, Brown did not write his scripts; and these two films do evidence sincere fidelity to their popular sources; Enid Bagnold’s novel in the cast of National Velvet (screenplay by Theodore Reeves and Helen Dautsch), and Marjorie Kinnan Rawlings’ novel in the case of The Yearling (adapted by Paul Osborn).  But, as he himself says, Brown chose his scripts carefully with an unusual (for MGM) degree of freedom and interest, and then he shaped them to his wants–resulting in movies that are distinctively his.

The Yearling, released in 1947, is enthralling, an unusual Hollywood film and an oddly disturbing one.  The story is a classic, of the impoverished backwoods family in the Florida Everglades and the young boy, Jody, whose dream, like Velvet’s, is to own an animal–a baby doe.  The movie  may have been edited for feature release already lengthy at near two hours, its continuity is sketchy in parts, and certain scenes in the middle (a brief farewell to a “cousin” who is bound away on a steamboat) seem to beg connection with the main narrative.  In addition, the cast is not perfectly suited.  Claude Jarman Jr. is exquisite as Jody with his delicate blond hair and pixie mien, and what someone once called a melting Southern voice. But Gregory Peck (who plays Denny Baxter) seems slightly miscast, a bit stilted, while Jane Wyman (who plays Ma Baxter) is tensed to the edge of malevolence.  What makes the movie so utterly winning, regardless, as with National Velvet, is its compassion, humour and natural decency.

Both National Velvet and The Yearling are brilliantly photographed.  Visual excellence was always a Brown trademark, beginning during the silent era when his background as an

engineer helped his understanding of the technical intricacies.  Scenes in National Velvet are quite breathtaking, especially the landscapes of the Downs with the turbulent sea in the background, and the bustling racetrack at Aintree; no less spectacular are the open-air sequences of The Yearling, in Technicolor, which wonderfully capture the lush Everglades foliage–the sultry feel of the weather there excessive during sun or storm–as well as the exhilarating pace of the bear hunt.  But Brown has also always had a flair for the intimate, low-lit scenes, too–scenes with a shadowy, hushed texture, illumined only partially, and mysteriously, by a flickering candle, a crackling log fire or a nocturnal stream of light from the stars.  It is an expressive, painting-like sort of touch that is kindred to his mentor, Maurice Tourneur.  Notice, in fact, that the director has an inclination to group his ensemble shots with the posed symmetry of a Rembrandt or Vermeer canvas (artists both he and Tourneur admired)–such as the group of friends and relatives frozen, with their backs turned and their faces wearily turned down at the bedside of Penny Foster in The Yearling.