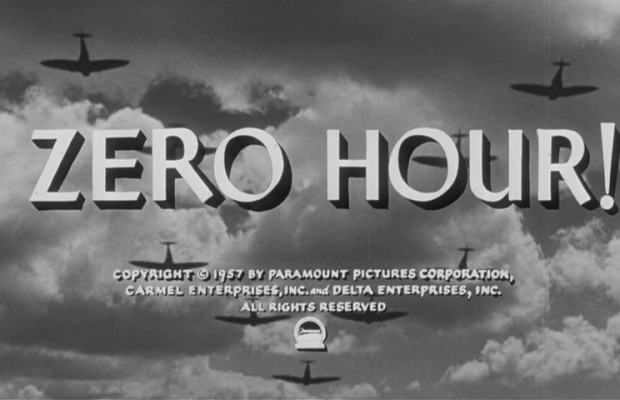 Ted Stryker, an ex-World War II squadron leader  is still haunted ten years after the war by a decision he made that resulted in the deaths of six of his men. Now his marriage is under threat as his wife has just left him, taking their young son with her, and is planning a flight to Vancouver. He rushes to the airport and manages to get on the same flight, but the captain, co-pilot, and several passengers suddenly fall ill from food poisoning, leaving Stryker as the only person on board with flying experience–though on a totally different kind of aircraft. It is up to him to overcome his personal and professional fears if the lives of all on board are to be saved.

Bosley Crowther of The New York Times called it “an exciting contemplation of a frightening adventure in the skies” based on “a good terse script…Dana Andrews as the hero and Sterling Hayden as the captain are first-rate in these roles, keeping them hard and unrelenting.”

Time, however, had a different response calling the script “a bloopy inflation of a 1956 television show”, whose “moral struggle comes off fairly well, but the general situation is as patently contrived as one of Walter Mitty’s daydreams.”

The film was reprised in 1971 as a made-for-television movie Terror in the Sky and was also used as the basis of the parody film Airplane! in 1980 which, as a Paramount production, was able to use the original screenplay almost verbatim. Somewhat unkindly, however, unsympathetic critics praised Turner Classic for showing Zero Hour! and Airplane  back to back in 2010, thus providing two parodies for the price of one.

Born Carver Dana Andrews on a farmstead in Mississippi, his family moved to Texas where he attended Sam Houston State University and then, hoping to find work as an actor he moved to California, where he studied theatre and acting at the Pasadena Playhouse, and became an acclaimed member of the company, attracting the attention of Samuel Goldwyn, who offered him a movie contract. His first film role was in The Westerner (1940) and this  led to his finest period as an actor in the following decade with Ball of Fire (1941–as a gangster), The Oxbow Incident (1943–as a lynching victim), Laura (1944–as an obsessed detective), The Best Years of Our Life (1946–as an air force veteran) and State Fair (1945–as a singer in a musical in which he starred with Jeanne Craine). His career began to stall in 1950s as a result of his alcoholism, and, after Where the Sidewalk  Ends in 1950 he moved more into B-movies, though he had success in Fritz Lang’s While the City Sleeps (1956) and Beyond a Reasonable Doubt (1957) and Jacques Tourneur’s Night of the Demon (1957). His later work was mostly in radio, after he had brought his alcoholism under control, and he died from heart failure in 1992 at the age of 83. [Notes adapted from previous TFS screening]

Born Sterling Relyea Walter in New Jersey, his name was a changed by his stepfather after  his natural father’s death. He dropped out of high school at the age of 17 and spent the next few years at sea, at first as a ship’s boy and later as a highly respected ship’s captain. In 1940  he signed a film contract with Paramount and made two films, during which time he fell in love with his leading lady Madeleine Carroll and married her. After the attack on Pearl Harbour he left Hollywood and enlisted in the Marines, and towards the end of the war was assigned to assist the Yugoslav Communist partisans who were resisting the Nazis, finally being promoted to captain and being awarded the Silver Star for bravery. Returning to Hollywood he expressed sympathies for the partisans on account of their courage, and briefly joined the Communist party. This brought him into investigation by the House Un-American Activities Committee and he co-operated with them in “naming names”, though he soon regretted doing this and later said he despised himself for his actions. Though he often expressed contempt for Hollywood, he appeared in several of the finest films of the post-War period, such as Stanley Kubrick’s The Killing and Dr. Strangelove, Nicholas Ray’s Johnny Guitar, John Huston’s  The Asphalt Jungle, and The Godfather, before retiring to concentrate on his first loves, travel and sailing. He died of cancer in 1986.

Began his film career with documentary films before moving into fiction features with Zero Hour!, followed by several films dealing with social or racial problems, such as All the Young Men, starring Sidney Poitier. His best known film is probably Jonathan Livingston Seagull, which, though admired for its technical effects, was heavily criticised for its theme and subject matter, with Roger Ebert calling it “the biggest pseudocultural, would-be metaphysical ripoff of the year.”

Born in England, he lived in Canada after 1947 and was a prodigiously bestselling novelist whose books have sold more than 170 million copies in 40 languages. They are generally set in a restricted environment, such as a hotel or a bank, and are based on months of detailed research and written in a plain easyreading style.