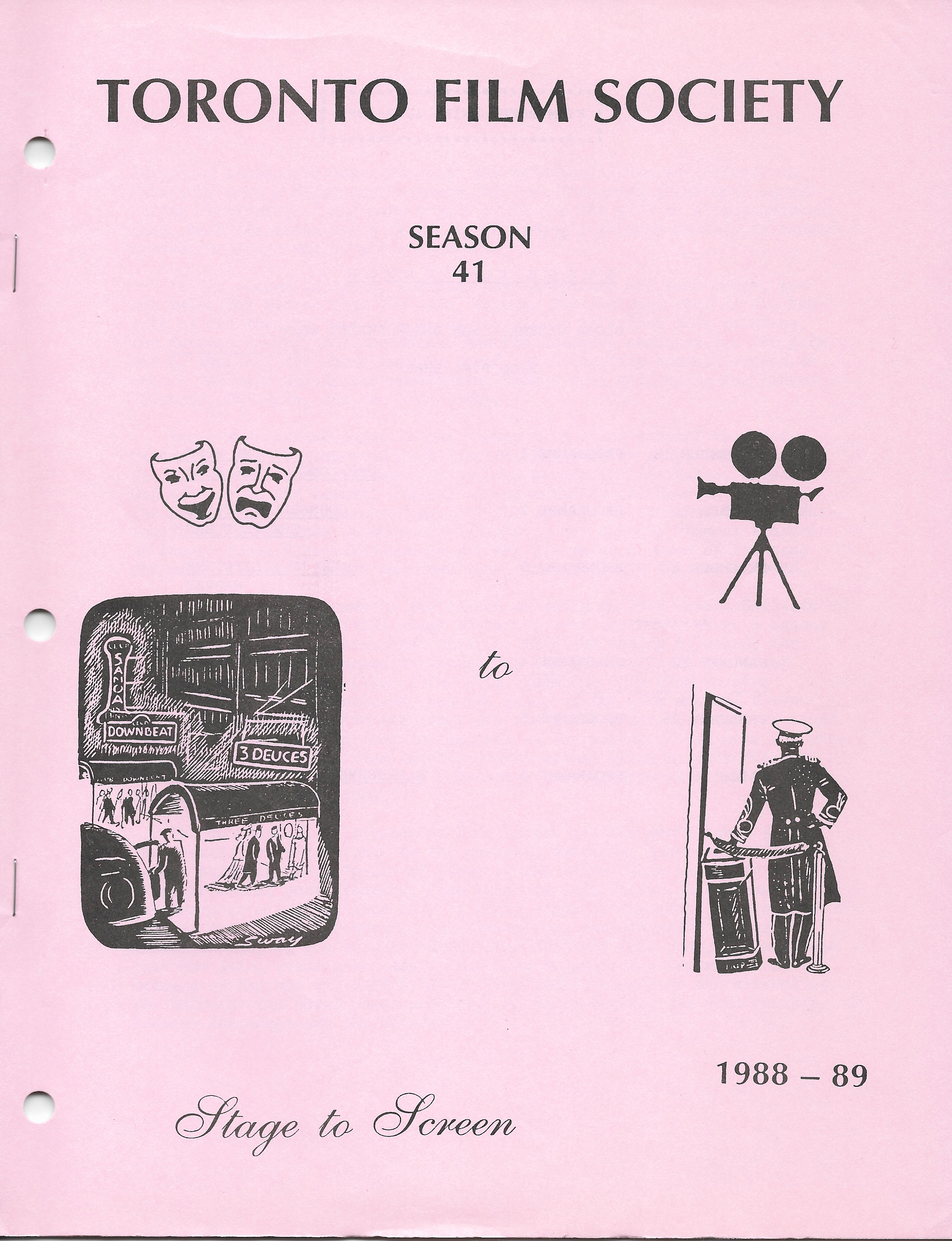 Programme 1: All My Sons and The Long Voyage Home
Programme 2: Counsellor-at-Law and The Best Man
Programme 3: Once in a Lifetime and Harvey
Programme 4: The Merry Widow and Kiss Me Kate
Programme 5: Separate Tables and The Chalk Garden
Programme 6: A Midsummer Night’s Dream and Roman Scandals

Stage and screen.  To many filmgoers the relationship is so intimate as hardly to make a difference between the two.  The early films were often called “photoplays,” and many people still see the film as a photographed play, with its superiority lying in the camera’s greater ability to range beyond the three walls of the theatre.

To the silent filmgoer, however, the difference was much wider, for the principal reason that the film, lacking the dialogue that is the keynote of the theatre, was seen as having closer relations with painting, the tableu vivant, the spectacle.  And the literary analogue for the film was to many not the drama but the novel.  So Eisenstein himself argued in one of the most famous and penetrating essays ever written on the cinema, “Dickens, Griffith, and the Film Today.”

These theoretical suppositions, however, did not prevent the early cinema (or the contemporary one) from seizing popular stage successes any less frequently than it took best-selling novels for its bases.  Before Griffith moved the camera, indeed, it was normally set down in front of the proscenium, and was shooting with the eye of the audience through the fourth wall.  And many filmmakers–Adolph Zukor and his “Famous Players in Famous Plays,” for instance–saw the cinema as a means of bringing the play to a much larger audience than the legitimate theatre allowed.

Thus Shakespeare came to the screen as early as 1908 (under Griffith’s auspices), and by the 1920s stage successes were regularly given a second lease of life in a “picturized” version.  With the coming of sound, the musical play, which reached the height of its popularity in the first quarter century of the life of the film, from “Chu Chin Chow” to “Show Boat”, entered the competition, and the genre of the film musical dominated the adaptations from the stage for the first quarter century of sound.  (We may note in passing that the masters of the silent cinema were not precluded by mere silence from turning highly verbal plays or even musical comedies into films: as witness Lubitsch’s Lady Windermere’s Fan or von Stroheim’s The Merry Widow.)

The adaptations we present in this series run the whole range from the greatest of playwrights to the greatest American; from vaudeville to rather self-conscious “problem” plays of the 1950s; from whimsy to Vidalesque political pontification; from Lehar to Cole Porter.  Since many of our audience will have seen some of these plays on the stage, the opportunities are rich for comparing the limitations and strengths oft he two media.  Indeed, if you’ve visited the Shaw Festival this year, you will see just how film, feeding on itself, may very suggestively expand the whole meaning of Kaufman and Hart’s rather tart little comedy on the arrival of the talkies: the event which enforced, as never before, the relationship between the stage and the screen.