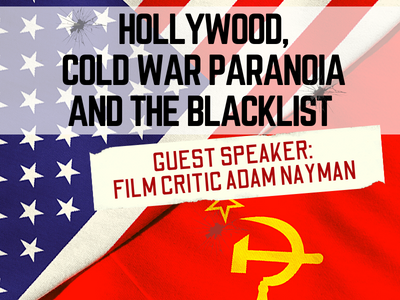 The Toronto Film Society is thrilled to partner with the Miles Nadal JCC for this series featuring guest speaker: film critic Adam Nayman

Fall 2022 marks 60 years since the Cuban Missile Crisis and the release of the Cold War psychological thriller The Manchurian Candidate. Fueled by the frenzy of the McCarthy era that resulted in the Hollywood Blacklist, the studios pandered to the ‘Red Scare’ by releasing anti-Communist propaganda films, while screenwriters and directors – some of them blacklisted and creating under assumed names – produced films as allegory, vehicles for hidden political and societal commentary. This five-part series explores this volatile and fractured time in film history. Co-presented by the Miles Nadal Jewish Community Centre’s Adult Daytime Culture and Education and the Toronto Jewish Film Society.