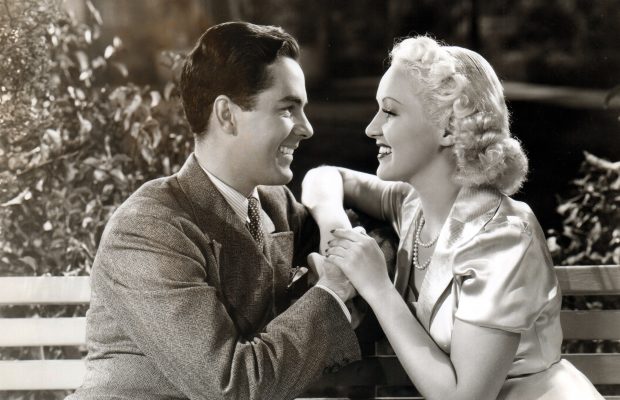 “With a college song, and a beard that’s long, we’ll be sophomores till we die!”— sung by Texas State’s perennial students, the Yacht Club Boys 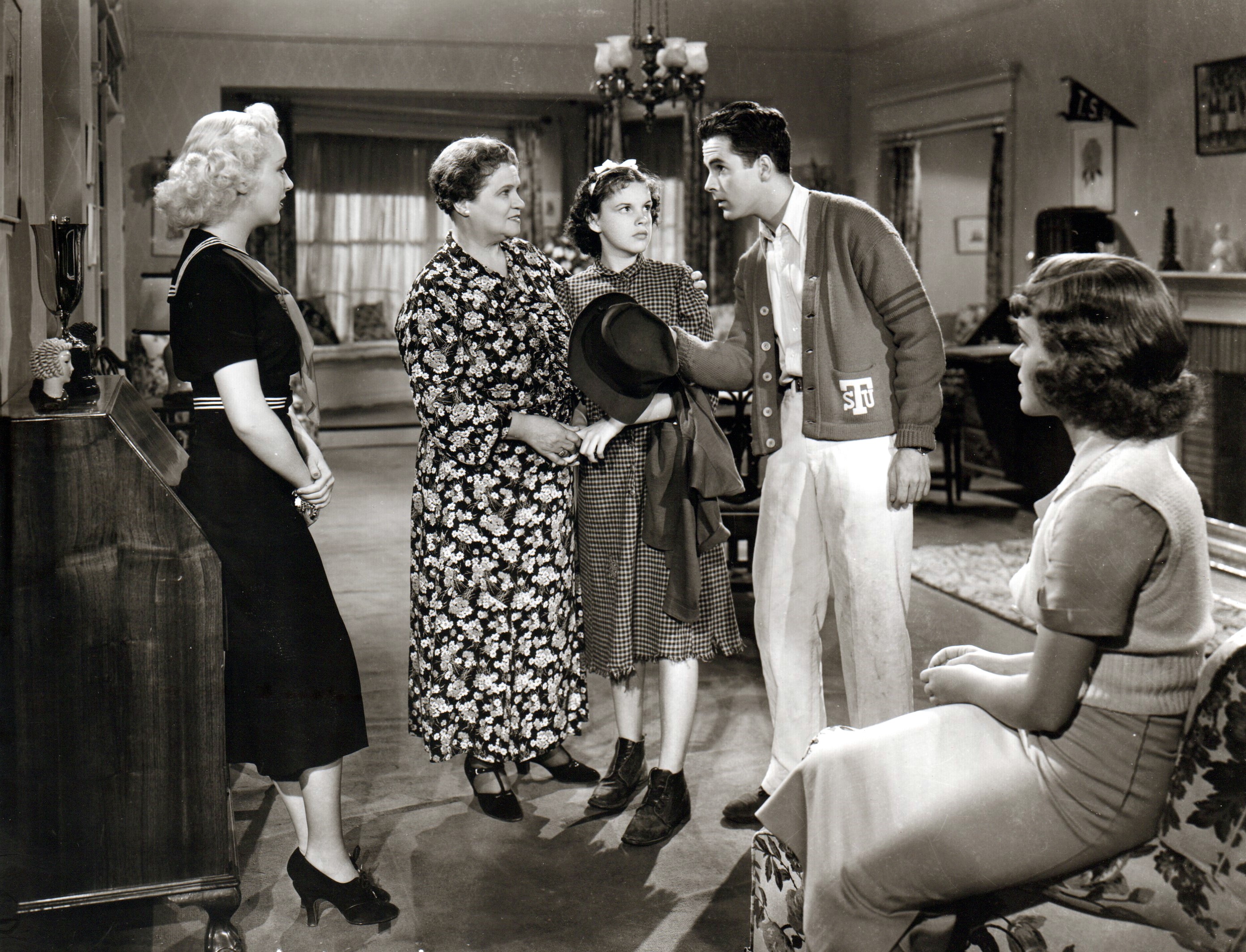 This cheerful little college football musical boasts a student body full of future stars. JUDY GARLAND, on loan-out from MGM at age 15, is seen here in her first feature film. Others include BETTY GRABLE and TONY MARTIN (here billed as “Anthony Martin”) and dancer DIXIE DUNBAR (later the dancing legs of the pack of Old Gold cigarettes in 1950s TV commercials). ALAN LADD has a non-speaking role in the fraternity house scene with the Yacht Club Boys – and watch for ELISHA COOK JR. in an unusual role.

PATSY KELLY (1910 – 1981) was born in Brooklyn to Irish parents, and decided at an early age to be a comedienne. Throughout her career, she capitalized on a homely persona and a wry way with a line. She made her Broadway debut at eighteen, and soon starred in Earl Carroll’s popular Sketches and Vanities musicals. She also appeared with stage comic Frank Fay. When she arrived late for a performance one night and Fay was already out on stage, Kelly explained to him and the audience that she had been at the beauty parlour. Fay ad-libbed, “You weren’t waited on, were you?” Joking aside, Frank Fay (her boss) developed a crush on Kelly, but she turned him down. Soon after, he fired her for calling him “Frank” instead of “Mr. Fay”. (He married his next protégée, Barbara Stanwyck, and wasn’t very nice to her, either.)

In a series of 2-reel shorts made with Thelma Todd for Hal Roach in the early 1930s, Patsy Kelly’s screen image was set: a blunt, candid woman whose brash wisecracks deflated the pomposity of other characters. She moved into feature films, often playing working-class character roles in comedies and musicals from the mid to late ‘30s. She enjoyed the work: “I laughed from the time I arrived at the studio until I left at night. I was almost ashamed to take a paycheck.”

Off screen, Kelly’s indiscreet lifestyle resulted in loud ejections from cocktail lounges and restaurants. She was an uninhibited problem drinker — there was frequent public nudity — and she was too volatile for the studios in those cautious days. By the 1940s, movie producers lost interest. But the less picky new medium, television, offered her plenty of work on top shows throughout the ‘50s and ‘60s. Patsy eventually returned to film playing “Laura-Louise” in the thriller Rosemary’s Baby (1968), and also appeared in Walt Disney’s Freaky Friday (1976).

She scored a huge success when she returned to Broadway in 1971 as the wisecracking, tap-dancing maid in the revival of No, No, Nanette alongside Ruby Keller. Patsy won the 1971 Tony Award as Best Supporting Actress for her performance. She was nominated for another Tony when she starred in 1973’s Irene with Debbie Reynolds. She remained philosophical about her career’s ups and downs: “In 40-odd years in show business, some years I could do no wrong, and some years I could do nothing right. Show business. I owe it everything — it owes me nothing.”

JACK HALEY (1898 – 1979) is best remembered for playing The Wizard of Oz’s Tin Man, though he made over 30 films and had a lifetime of experience in show business. He started as a popular song-and-dance comedian in vaudeville. One close friend from the old vaudeville days was Fred Allen, who liked to use his buddy’s name during radio broadcasts: a “Mr. Jacob Haley of Newton Highlands, Massachusetts” was often mentioned on Allen’s Alley.

In the early 1930s Haley starred in comedy shorts for Vitaphone in New York. These led to supporting roles in Hollywood musical features like Shirley Temple’s Poor Little Rich Girl (1936), Wake Up and Live with Alice Faye (1937) and the Irving Berlin musical Alexander’s Ragtime Band (1938). He was hired for The Wizard of Oz after aluminum-powder makeup nearly killed MGM’s original Tin Man, Buddy Ebsen. Though the makeup was switched to a paste, it still caused Haley a serious eye infection, and his eyes often look quite red and sore in the film. Haley missed days of filming, but received treatment in time to prevent permanent damage. For the “Hickory” farmhand character Haley used his natural voice, but for the Tin Man he spoke more softly. He later said that was the tone of voice he used when reading stories to his children.

Haley was married for 58 years to former vaudevillian Florence McFadden, often referred to as “the brilliant Flo Haley.” With her keen business sense she turned their earnings into a fortune. She also owned a successful Hollywood beauty shop, known jokingly as “Flo Haley’s House of Correction” which was very popular with celebrities. As his film career waned in the 1950s, Haley turned his energies to charity work. The couple had one son, Jack Haley Jr. (later a successful film producer) and one daughter, Gloria (who published Haley’s written memoirs in the book Heart of the Tin Man).

A few weeks before his death, Haley made his final public appearance at the 1979 Academy Awards, co-presenting an award with his old friend and former Oz co-star Ray Bolger. When Bolger jokingly asked why Haley got to announce the winner, Haley held on to the envelope and replied, “Well, when your son produces the show, you can announce the winner!”