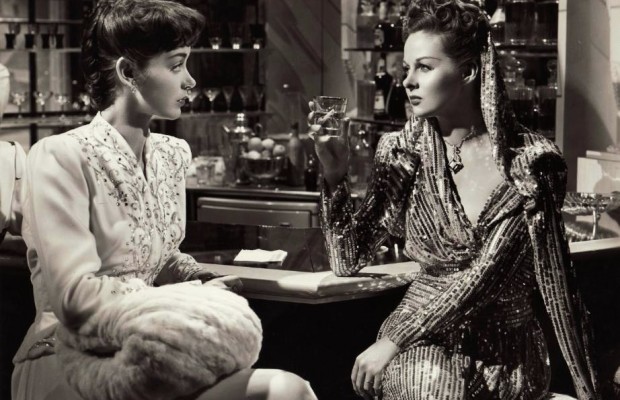 Toronto Film Society presented Smash-Up, the Story of a Woman (1947) on Monday, April 13, 1981 in a double bill with A Cold Wind in August as part of the Season 33 Monday Evening Film Buff Series, Programme 9.

Unfortunately little shown in recent years, Smash-Up is a notable film.  Not entirely free of clichés or conventional elements, it has more than enough drive and honesty to overcome them.  In 1947, the picture’s impact was slightly lessened by inevitable comparisons with The Lost Weekend, Billy Wilder’s study of a male alcoholic, still strong in the public memory from two years earlier.  But, whereas Ray Milland won an Academy Award for his bonanza of booze, Smash-Up in turn packed enough punch to bring at least the first Hayward nomination for an “Oscar”.  The new film, incidentally, was unwise in occasionally drawing attention to similarities with The Lost Weekend.  Unimaginative Frank Skinner’s bangy but blessedly limited music even borrowed a theramin, that weird instrument more or less patented by a far finer composer, Miklos Rozsa.  And the contrastingly very imaginative Stanley Cortez was perhaps in a quandary over possible subjective shots from the drunken heroine’s viewpoint.  He restricted his photographic hallucinations to one set of harsh light flashes and one watery blurring of vision.  In general, Cortez–who was to work frequently on Hayward films at her own request in the future–provided superbly helpful and atmospheric lighting for the movie.  Less openly expressionist than some of his work, such as on Welles The Magnificent Ambersons, the richly graded photography here subtly created blocks of light emerging from dark shadowy backgrounds, the frequent weakness of human behaviour seeming to stem from a blank black cosmos.

There is an obvious irony in the fact that most of Susan’s most admired performances (including four of the five that had Academy Award nominations) were given in films shot in black and white.  She always looked superb in colour and acted no less vigorously when brightly hued.  But black and white lensing retained the mark of greater credibility, where intense drama was concerned, through all the years of her prominence.  As late as 1958, Susan’s eventual “Oscar” was awarded for I Want to Live!, in starkest monochrome.

Seen again retrospectively, this landmark Hayward performance is bound to be somewhat undercut by knowledge of her subsequent career.  She would have drunken scenes quite often in the future and, for an actress not also thought of as a singer or dancer, a surprising number of her films would be, in a partial way, musicals.  Smash-Up began this dual trend: to adapt a narrative aside from her own forthcoming With a Song in My Heart, “she had the songs in the morning and the booze at night.”

The disease of excessive drinking used to be referred to as “dipsomania”, rather than as “alcoholism”.  By any name, this quite courageous film rightly presents it for what it is–degrading, debilitating and terrible bore.  That last nuisance value of alcohol is not widely understood; nor is the peculiar black comedy of certain drunken situations.  Susan, very adept as a comedienne but seldom given credit for it, conveys the ridiculous as well as the tragic side of dipsomania remarkably.  Struggling to pull a dress over head, she makes wonderful but discreet pantomime out of the unfortunate fact that her arms won’t coordinate with her sodden brain.  With slurred speech but tremendous attempts at coherence, she reminds us that an effective drunk scene is mainly a matter of trying not to seem drunk.  The intelligent John Howard Lawson script gives to her character all the stock defense responses to criticism, on the lines of “I’m-not-huring-anyone.”  Thenn it gives to somebody else (friend Eddie Albert, doctor Carl Esmond) the reasoning to shatter the illusions.  All of this is quieter, more reflective, than eithr The Lost Weekend or Susan’s own eventual I’ll Cry Tomorrow but, in its very domesticity, possibly more home hitting.