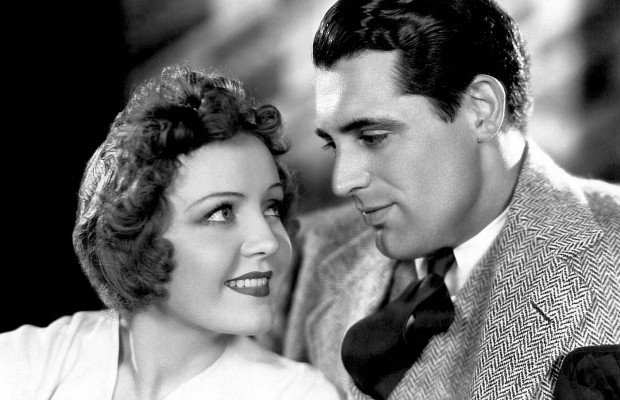 Toronto Film Society presented Hot Saturday on Saturday, May 11, 2013 as part of Season 66 May Festival: The Pre-Code Weekend.

This little gem has some interesting elements to it.  First of all, it stars Nancy Carroll who was in many pre-Code films.  She was an attractive, popular actress who has become somewhat obscure in the history of early Hollywood.  Here she plays opposite Randolph Scott and a very handsome, almost pretty, Cary Grant.  What is noteworthy about this film is that it depicts young adults in their late teens, early 20s, having fun in their small town on the weekends.  And things haven’t changed; there is lots of hypocrisy among the females and much rumour-mongering among the townsfolk.   They may not have had social media like today, but that didn’t seem to stop them from ruining someone’s reputation with false accusations.

This is also the film where Cary Grant and Randolph Scott first met.

I know you won’t miss it, but try not to salivate over Cary Grant’s car!  It’s a beauty.

Familiar story of a girl triumphing over small town gossip against her character, treated in a pleasing, but not punchful, fashion.  Having no A name draw in its cast and but fairly agreeable as entertainment, picture will not get preferred playing time.  It grades as a B picture in the big towns and as a first-run choice in the smaller spots, among which Nancy Carroll’s following still merits such booking.

In many of the double-feature spots, when picture reaches those sub-runs, ‘Hot Saturday’ should be the first, rather than the second, feature.

Title is figured as having some power at the box office, but not to the extent where fall season house averages in the larger A house will be reached, let alone topped.  Title is a reference to the fact that action takes place during the summer in a small town where everyone wants to go to the country on hot Saturday nights.

Novel on which picture is based was published several years ago at a time when wild youth was better b.o. than it is now.  Whatever the original story, it must have promised more than its adaptors have realized since the treatment that was accepted for filming leaves a lot of room for improvement.

Much of the dialog is banal, little of it affording Miss Carroll or others anything big to shoot for.  Direction has been far more capable, William Seiter injecting many little touches which go a long way toward making the programmer palatable fare for the fans at medium prices.

Miss Carroll, who never seems to grow up and here again is costumed in the simple little high school girl togs, does a bank secretary in a small town, where gossip over an innocent set of circumstances finally crowds in on her from all sides.  Story is generally convincing, even though it eventually has Miss Carroll rushing out in a violent rainstorm, which lays her low at the door of the mountain camp of a boy friend.

Cary Grant does a rich playboy, whose attentions to the young bank worker inspire evil gossip, while Randolph Scott plays the geologist, a boyhood friend, who walks out on marriage to the girl on hearing the idle rumors.

Grant stands ahead of Miss Carroll and Scott in performance.  He exercises extreme restraint toward his part that robs it of any glamour it was intended it should have.  William Collier, Sr., excellent in short stretches of footage.  Rose Coghlin, Lillian Bond and Grady Sutton also carry off small assignments competently.  Technically, production grades as standard.

What impresses most about “Hot Saturday” is its relaxed sophistication.  Sophistication was certainly not new or rare in 1932, the year of “Trouble in Paradise” and “Love Me Tonight”, but it was (in

those films) a very conscious sophistication.  But in its own less ambitious way, “Hot Saturday” is a film of equal maturity, full of assured playing and excellent dialogue, so naturalistically welded that many pungent lines are almost lost because of the off-hand way they are delivered.  Good taste was always a keynote of William Seiter’s work, both in his silents and in his very prolific sound career too, and it is a constant factor in “Hot Saturday”.  It is a pre-Code movie, and makes no bones about sex in a couple of sequences.  But it never strives for shock, or tries to prove how “adult” it is by hitting us over the head with its implications.  Although like many depression-era movies it has its Cinderella aspects, it’s not really an “early 30’s movie” in the accepted sense.  The fashions, the cars, the remarks about Hoover and prohibition, all place it in the pre-New Deal era, but essentially it’s a picture about youth and comparative innocence.  It’s undated by period in the sense that its characters and attitudes are still valid—somewhere, if not in New York—and that we can all of us recognize in it something of our own years of growing up.  One of its charms is that its “ordinary” people have none of the excesses of virtues and vices that Frank Capra’s stereotypes regaled us with in the 30’s; the worst vices of its “villains” are petulance, childishness and shrewishness.  Its overall cheerfulness is enhanced by liberal pillaging of the Rodgers & Hart and Strauss melodies owned by Paramount, by the pleasing playing of Cary Grant & Randolph Scott (rivals in love at the end of the 30’s too in “My Favorite Wife”) and most especially by the utterly winning elfin personality of lovely Nancy Carroll.

HOT SATURDAY, Paramount production and release.  Directed by William Seiter.  Based on novel by Harvey Fergusson, with adaptation by Josephine Lovett and Joseph Moncure March.  Photography by Arthur L. Todd.

Small-town tongues are wagging at the Paramount and small-town eyes are watching that Brock girl from behind drawn shades.  “Hot Saturday,” which is from Harvey Fergusson’s novel, describes the evolution of an idle bit of gossip in an average American community with considerable freshness and candor, and in the main manages to survive a meandering script and some uneventful writing.  Nancy Carroll, as the girl caught in the net of malicious gossip, gives a lifelike portrayal; and she is acutely touching in the final episodes as she searches frantically for some one who will understand and believe her.  The denouement is unintentionally ambiguous, and a rather startling conclusion at that; for the girl runs off with the notorious libertine to a marriage in New York which, if one is to believe all the things people say about Romer Sheffield, will be merely theoretical.

The title suggests the social activities of the young people on their day off, the dancing, cheap liquor and furtive amour with which they escape once a week from their routine labors.  Some may raise the criticism that the behavior in “Hot Saturday” is more typical of the years immediately prior to 1926—the year the novel appeared—than of the present.

Ruth Brock, on this particular “hot Saturday,” accompanies the crowd to Sheffield’s place in the country.  Her young man, resenting Sheffield’s attentions to the girl, quarrels with her.  When she is left alone in the millionaire’s house for a few hours and arrives home in his car, the gossip-mongers go to work with a relish.  The accumulation of outraged virtues results in Ruth’s dismissal from the bank and a violent scene at home.  Even her gentle, understanding sweetheart of school days turns against her.

Edward Woods, as the malicious and resentful escort, gives the most satisfactory performance in support of Miss Carroll.  Cary Grant is a nonchalant young libertine as Sheffield, and Randolph Scott is solidly virtuous as the boyhood sweetheart.