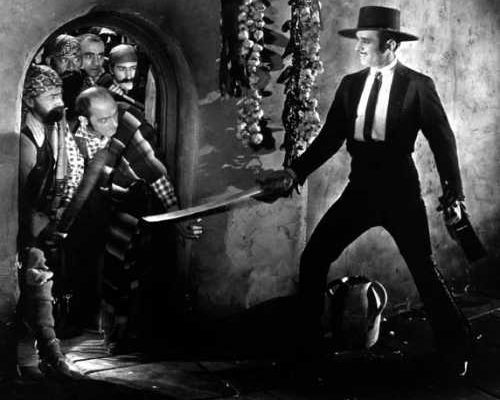 1st Season – 1st Program
at the

One of the NFB’s charming “Faces of Canada” series, this picture shows the making of marionettes and how they come to life in the skilled hands of puppeteer, Micheline Legendre.

One of UPA’s attractively designed cartoons in which Pete Hothead confuses a car his wife has won with a new car he has just ordered.  Some mild satire at the expense of TV competitions and the sharp practices of the motor trade.

Thrills From the Past
Warner Bros., USA 1954, 11 mins.
Producer and Script, Robert Youngson

This is the second of a series of shorts prepared for Warners by the enterprising Robert Youngson, in which highlights of films made by the company in the silent and early sound periods are presented with added commentary.  This short consists of episodes from Old San Francisco (1927) directed by Alan Crossland, an extravagant melodrama in which Dolores Costello is captured by a Chinatown gang operated by Warner Oland and Anna May Wong, and fortuitously rescued when the San Francisco earthquake reduces the villains’ headquarters to rubble.  The treatment resists the familiar Hollywood tendency to be facetious at the expense of the past.

When Harry Aitken of the Mutual Corporation had the idea of recruiting screen stars from stage favorites, his company disagreed.  He then organized the Triangle Corporation, named in honor of his new colleagues, Griffith, Ince, and Sennett.  One of the many stage stars they signed was Douglas Fairbanks, chosen in Aitken’s words, “not on account of his stunts, as the majority think, but because of the humanness that fairly oozed out of him”.  In rehearsing his first film, The Lamb, Fairbanks embroidered his set speeches with incidental acrobatics that evidently pained D.W. Griffith, who was supervising.  Griffith privately advised him to go into Keystone comedies.  But three others on the Triangle payroll, Frank Woods, John Emerson and Anita Loos, recognized in Fairbanks’ inconsequential gaiety the raw material of a new screen character.  Within two years, they had winnowed Fairbanks, the stage actor, out of their scripts and managed to produce a character who was the idol of small boys, and “the best-liked figure” on the screen.

Between 1915 and 1931 Fairbanks made forty-three films.  Eight of these are costume pictures, another half-dozen are essays in the picaresque and can be called costume films only if sideburns and utilitarian kneebreeches can be considered minimum qualification, and the remainder are comedies in modern dress in American themes”.

In Don Q, Son of Zorro (a sequel to The Mark of Zorro) Fairbanks let slow-motion photography articulate, as it exquisitely can, the physical coordination behind his busy leaping and vaulting.

Notes by the Museum of Modern Art Film Library 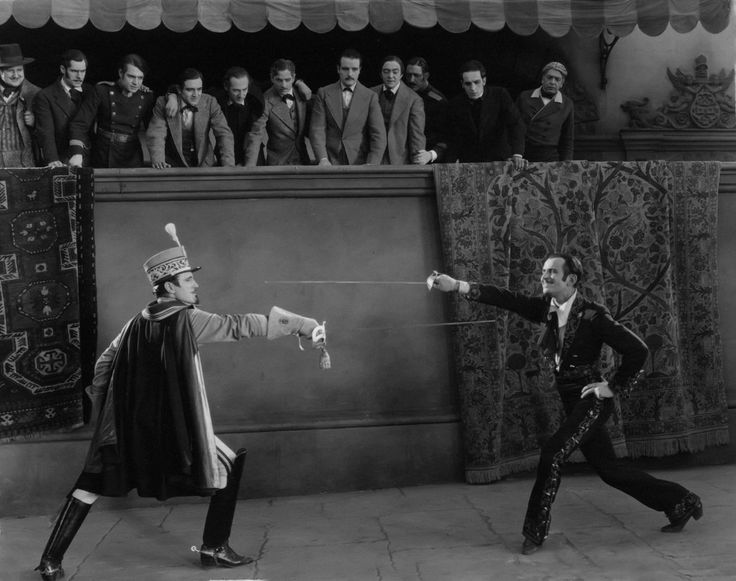 Following The Thief of Bagdad, Fairbanks’ next film was Don Q, Son of Zorro…”for which he again went back to his boyhood for an idea.  Old Hardrock’s mule whip had its more glamorized counterpart in an Australian stock whip as the novelty feature of this picture.  With this device, used as a weapon of defence and offense, he presented an entirely new bag of tricks.  To prepare himself adequately for these stunts, he brought an expert whip man from Australia and for six weeks, he practiced whip-popping until he could use it like a twenty-foot extension of his own arm.

When he began work with the whip, he wore a mask similar to the face protector worn by fencing pupils.  In the hands of a novice, this particular type of whip can be dangerous, as Douglas, Jr., discovered one day when he attempted to snap it and cut an ugly gash on his cheek, barely missing an eye.

In the hands of an expert, such a whip could become an excellent weapon.  However, it was not always as a weapon that Fairbanks used it as he went to some length to demonstrate in several scenes in the picture.  In fact, he proved that a whip can be both entertaining and amusing.  So adept did he become with the lash that he could wrap it around the arm or neck of a person from a distance of ten or twelve feet without occasioning the slightest injury or even discomfort.

The stunts which he accomplished with the whip in Don Q, were many indeed:  He disarmed a man of his sword, put out a lighted candle, cut in two the contract for a forced marriage of the heroine to the villain, broke a bottle, captured a wild bull which was about to kill the captain of the Queen’s Guards, knocked a cigarette out of the villain’s mouth, brought down and tied a man of high rank and low morals, and used it as a swing to mount high walls and make his escape from castle dungeons”.

from Douglas Fairbanks, the Fourth Musketeer by Ralph Hancock and Letitia Fairbanks

GOD SAVE THE QUEEN

The purpose of the A-G-E Film Society is to provide those who lived through the cinema’s formative years with the opportunity to relive the past, and to give the new generation of film enthusiasts the chance to see what had been accomplished in motion pictures before their interest in films began.  The directors anticipate with pleasure your attendance at the society and trust you will share with them the enjoyment to be found in these films of enduring distinction.

— for the Studio Cinema, Bob Lester

NOTE:  for future screenings, program notes will not be mailed, but distributed at the theatre.