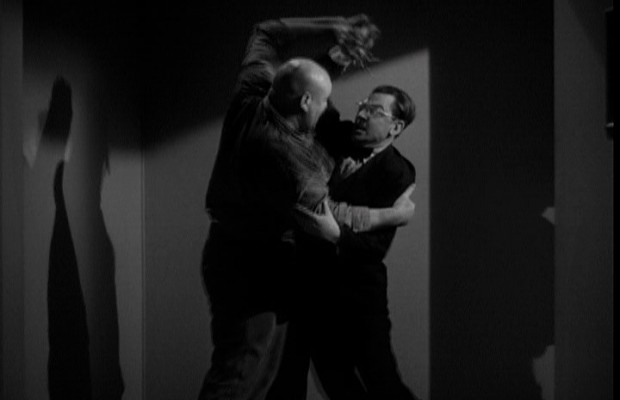 Toronto Film Society presented Behind Locked Doors (1948) on Sunday, November 4, 2012 in a double bill with Penthouse as part of the Season 65 Sunday Afternoon Film Buffs, Programme 2.

Behind Locked Doors: MURDER was the ONLY way out!

Director BUDD BOETTICHER first became involved with motion pictures along a most unusual avenue. Middle-class Midwesterner Budd was a great adventurer at heart. He followed his education at Ohio State by travelling to Mexico, where he became a well-respected professional matador. His old school friend, Hal Roach Jr., found Boetticher work in the film industry, most importantly the job of technical adviser on the bullfight classic Blood and Sand (1941) for Twentieth Century-Fox. He closely studied that film’s director, Rouben Mamoulian, and its ace editor Barbara McLean, aiming to become fluent in filmmaking. After directing several low-budget films, including Behind Locked Doors, Budd’s first prominent film took him back to the bullring for The Bullfighter and the Lady (1951). This led to a very successful series of westerns in the 1950s starring Randolph Scott, with whom Boetticher formed a partnership. Today he is best remembered for his westerns.

This was the eighth and final film of LUCILLE BREMER. Bremer began as a dancer; she joined the Radio City Rockettes at 16 and later worked as a Broadway chorine. MGM producer Arthur Freed spotted the pretty redhead dancing in a restaurant’s floor show and quickly arranged a screen test. Despite Bremer’s lack of dramatic training, Freed and studio head Louis B. Mayer were very enthused about her, and she made her screen debut as the oldest daughter in their big-budget Technicolor musical Meet Me in St. Louis (1944). Fellow cast members found her cold and lacking in acting ability, but the studio persisted in showcasing Bremer, seeing her as a replacement for their recently-retired dancing star Eleanor Powell. Her next film, Yolanda and the Thief (1945) had impeccable credentials; it was directed by Vincente Minnelli and she co-starred with Fred Astaire. But the film was an expensive misfire, and Lucille was never given another starring role in a musical. She and Astaire danced very well together, and their two subsequent numbers from the revue Ziegfeld Follies (1945) are actually her best work at MGM. After a similar “guest appearance” dancing with Van Johnson in 1946’s Till the Clouds Roll By, MGM lost all interest in her. Her last three films, including Behind Locked Doors were made on loan-out to poverty- row studio Eagle-Lion. While filming Adventures of Casanova (1948) on location in Mexico, she met millionaire Abalardo Louis Rodriguez, son of a former president of Mexico. They married in 1948, and she officially retired. The couple lived in luxury in Mexico and had four children before divorcing in 1963. Lucille moved on to La Jolla, California, where she owned and operated a children’s dress shop. She died of a heart attack in 1996, aged 79.

Perennial second-string leading man RICHARD CARLSON was always believable playing serious, introspective academic types. That really wasn’t much of a stretch, as he was among the best-educated people in Hollywood. The high school Valedictorian went on to a Summa Cum Laude, Phi Beta Kappa Master of Arts in English Literature from the University of Minnesota. In addition to teaching English at his alma mater, he wrote many short stories and human interest articles which were published in various magazines. His original ambition was to be a playwright. With this in mind, he invested all his money buying his own theatre in Minneapolis, writing plays and often appearing as a lead actor. He went on to perform on Broadway opposite Ethel Barrymore, Jimmy Durante and Ethel Merman. In 1938 he was offered a contract at RKO by producer David O. Selznick and moved out to California. He made many films, most of them forgettable second features, before the onset of World War II. One standout Carlson performance came in William Wyler’s The Little Foxes (1941). This was followed by his pivotal role in the steamy hit melodrama White Cargo (1942) opposite Hedy Lamarr. After Pearl Harbor, Richard left films to join the war effort. When he returned after the war, it was hard to find work. He appeared third-billed in MGM’s big Technicolor production of King Solomon’s Mines (1950), but it didn’t lead to bigger job offers. The studio system was on the wane and secondary actors like Carlson were among the first to be jettisoned. He found work in television, often writing and directing as well as picking up acting jobs. In the 1950s, Carlson appeared in four low-budget science fiction features which have since attained cult status. It Came From Outer Space (1953), The Magnetic Monster (1953) Riders to the Stars (1954) and especially the smash hit drive-in theatre classic Creature From the Black Lagoon (1954) ultimately made him an icon of 1950s sci-fi. He is best remembered for these films today. Shortly after his retirement, Richard Carlson died unexpectedly of a cerebral hemorrhage in 1977, at 65. He left his wife of 38 years, Mona Carlson, and their two sons.