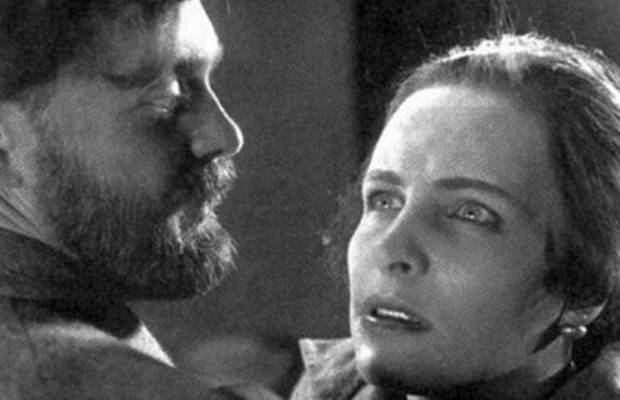 The programme will open with a Laurel and Hardy comedy, Flying Elephants, followed by a 10-minute intermission.

Upon screening this film in New York last summer I decided immediately to book it for the Silent Series as I was impressed not only with its historical and technical interest, but with the fact that its story was told with much more humanity, humor and even satire, than was usual in Soviet films of its period–or any period.

Jay Leyda in Museum of Modern Art Film Notes says: “in the tradition of the propagandist film, Fragment of an Empire deals with immediate social problems, but differs from the majority of the type in the quantity of problems touched and in the depth and acuteness of its criticism.  the scenario deals with the human aspects of socialist construction, questions of new working relationships, of mass culture (and its misuses), and of marriage and modern domestic life, since private discord reacts upon social well-being.  These several themes, affecting everyone in the USSR, were focussed by the film through the experiences of one character who had lost his memory in the Great War, regaining it 10 years after the Revolution.  The treatment of the material is a model of realism, presented without any sophistication–almost as if Ermler were telling a parable–though its technique recalls both Eisenstein and Dovshenko and, more than once, Pabst.  For his characterization, Nikitin was disguised as a doctor’s assistant in the Forel Psychiatric Clinic, where he studied amnesia patients; and it was Ermler’s sharp (personal) observation of both mental disease and war that made the fantastic episode of the return of memory so compelling.  An accidental sequence of objects and movements brings back scraps of images, dimly remembered sounds, swinging a kaleidoscopic group of fragments into a recognizable pattern of the past–and Filmonov is himself again.  The last half of the film is really a comedy, in the realistic style of Bed and Sofa, beginning with the tram ride during which Filmonov is bombarded by new sensations, till the final episode in the apartment of the cultural worker, who is given a cruelly sardonic treatment.  In this half of Fragment of an Empire Ermler has made a successful effort to devise a modern method for the folk-comedy, intended more for local than general appreciation.”

Said Paul Rotha in The Film Till Now (1929): “Fragment of an Empire was the epitome of Soviet sociological propaganda cinema, realized with an extraordinary skill of technical achievement.  A complete document of the social and political life of contemporary Russia.  From a psychological point of view, Ermler’s direction was amazing.  The subconscious process of the hero’s mind, particularly in the return of his memory through an association of latent ideas, was portrayed with extraordinary power; the changing mental states were subtly revealed.  The employment of technical resources was admirable; the cutting swift and slow in perfect modulation; the pattern closely woven.  It is undoubtedly the outstanding film of the Soviet cinema after those of Eisenstein and Pudovkin.

NOTE TO MEMBERS:  During the season closing tonight, we have shown the following features: Blind Husbands, The Late Matthew Pascal, Wild and Woolly, When the Clouds Roll By, Siegfried, The Avenging Conscience and Fragment of an Empire; and the following short films: Crainquebille, Mighty Like a Moose (Charlie Chase), Soldier Man (Harry Langdon), The Lonedale Operator, The Musketeers of Pig Alley and The Battle of Elderbush Gulch (three Griffiths), and Flying Elephants (Laurel & Hardy).

What feature(s) and shorts(s) did you like best?
Did you like this season’s programme more than last season’s–or less?
Why?

Please add any comments you wish on the back of the sheet, and leave after the show–or mail to: G.G. Patterson, 10 Bowden, Street, Toronto.