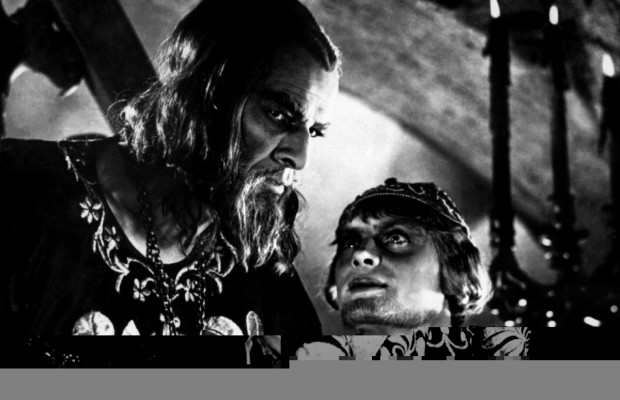 This programme was originally planned as a tribute to one of the most import— and filmmakers of the world who died this year: Sergei Eisenstein, a man who, though a part of the Soviet film industry, transcended in his work the propaganda aims which were the chief reason for the birth of Soviet films. With the showing of his second film, Potemkin and his last, Ivan the Terrible, this performance was to take the form of an Eisenstein memorial Programme. However, due to the damaged condition of the only available print, it is impossible to run Potemkin tonight. lt is hoped that it will be run at a later date when members will have the opportunity to compare this early masterpiece with his last expression, Ivan the Terrible which is presented tonight. Substituting Potemkin are two new documentaries: Chinese Shadow Play (USA, 1947, colour) and Rhythm of Africa (Actualities Francaises, 1947).

A Note on Eisenstein

Sergei Eisenstein was born in Riga in 1898. At the time of the Revolution he was a 19 year old student of architecture, he organized an amateur theatre group for the Red army and later migrated to the
professional theatre. His association with Alexandrov and Tisse, the photographer led to the three young men collaborating on Eisenstein’s first film, Strike. Eisenstein died while working at a thesis on February 10, 1948.

Eisenstein’s international reputation is based on six completed films and many important contributions to film literature, of which the best known is The Film Sense. The films are Strike (1924), Potemkin (1925), October (1928), The Old and the New (1929), Alexander Nevsky (1938) and Ivan the Terrible Part 1 (1945). Que Viva Mexico, as originally conceived by Eisenstein, was never completed, but some of the footage shot in Mexico was edited by Sol Lesser into Thunder Over Mexico (1933) and by Marie Seton into Time in the Sun. Eisenstein did not consider these versions worthy of his efforts and never even saw them or the original footage.

Conceived as a three-part epic on the life of Russia’s first Czar, the first part was cut down from a much longer version. It came at a period in Eisenstein’s career when he had already experimented with the audio-visual technique in Alexander Nevsky, his first sound film. Here, as in Nevsky, Eisenstein used professional actors, whereas in the other four films montage has enabled him to get completely convincing effects from non-professionals.

Concerning the merits and demerits of this “visual opera,” the Programme Committee of the Toronto Film Study Group have conducted many arguments amongst themselves. Reactions have varied. They have used for this film such epithets as  “great art,” “disappointing,” “uncinematic,” “experimental,” “exciting,” “static,” ”great moments,” “theatrical,” “tiring.”

What do our members think? Communications sent to Dorothy Burritt,, 253 Grenadier Road, will appear in the notes for the next programme.

The next programme will take place on December 15th.