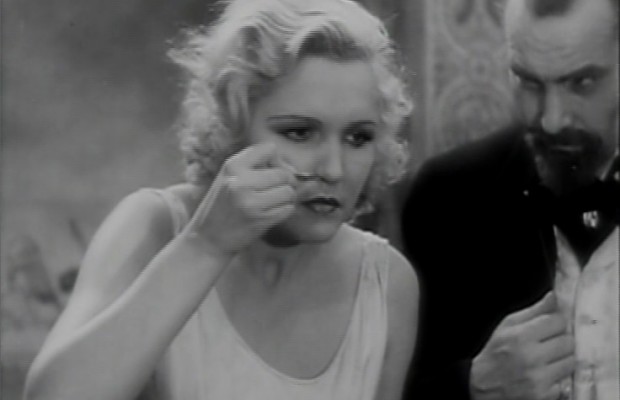 Toronto Film Society presented Narcotic on Saturday, May 11, 2013 as part of Season 66 May Festival: The Pre-Code Weekend.

Well, this film isn’t a particularly good film, but it has one of those very weird scenes, that you wouldn’t have seen in any kind of mainstream film of its time.  I don’t have to even hint at what the scene might be.  Just don’t fall asleep when the party starts!

From All Movie Guide: There are bad movies — then there are Edward D. Wood Jr.’s bad movies — and THEN there are Dwain Esper’s bad movies (which, to all intents and purposes, are synonymous with Dwain Esper’s movies). From the early ’30s until the 1950s, Esper was a bottom-dweller in the field of exploitation movies, a producer and distributor so lowbrow and sleazy (and at times

grotesque) in his output and methods that he was an embarrassment to most of his colleagues in the exploitation field, a realm of filmmaking where shame was otherwise virtually unknown. Esper already had a background as a huckster when he entered the field of movie making by accident, when he acquired a film lab in settlement of a debt in the early ’30s. Esper soon discovered that it was possible, even in the midst of the Great Depression when many families didn’t have two spare quarters to rub together and many more were worried about being in that situation, to get citizens to happily pay admission if he could deliver a product that was sufficiently sensational in nature. This amateur producer thus began generating movies with titles like The Seventh Commandment, Narcotic, Maniac (also known as Sex Maniac), Marihuana, and, most famous of all, Reefer Madness. Apart from their sheer crudeness — which could make the movies of Edward D. Wood Jr. seem graceful and lyrical by comparison — the most striking element common to all of them, right up through 1948’s Will It Happen Again (aka The Love Life of Adolf Hitler), was their attempt at establishing an educational demeanor. The implied message of the movies and their promotion was that the people who made them weren’t interested in taking your money (though they would do that) so much as in educating and warning audiences about an otherwise forbidden subject, and if there was some titillation or a risqué thrill to be found in parts of it, so be it — thus was the hypocrisy behind the formula in selling and seeing one of Esper’s movies.

Esper took advantage of Hollywood’s Production Code, which restricted movies made within the Hollywood studio system from various overly sexual, decadent, or controversial subjects, by avoiding it; he did this by not distributing his movies to theaters by the normal route of established film exchanges and theater chains. Rather, Esper was more like a sideshow barker, the equivalent in movie exhibition to what the barnstorming pilot was — Esper and his designates would blow into a small town or a modest-sized city the way a carnival moved in (and they were sometimes part of carnivals), with lots of ballyhoo about whatever movie they were pushing, usually in an educational context, to be shown either in a tent outside of town or in a theater conveniently rented for one or two days; they would blow out of town just as quickly, before local authorities could act to close him down (based on Esper’s having avoided whatever state censorship laws existed, and all 48 states of the period had them). Then it was on to the next town, or city, or county, and so on.

After WWII, the exploitation field was more concentrated in theaters, and Esper survived in business into the era around the Korean War. There was some poetic justice (or injustice) awaiting this schlockmeister as he reached his seventies, however, when some enterprising hands stole a march on him with his own product. In the late ’60s, a distributor had secured a copy of the 1938 version of

Tell Your Children, titled Reefer Madness, and started releasing it on college campuses — the movie quickly because a campy favorite among students, and 16 mm dupe copies were being shown all over the country at colleges and in theaters trying to book midnight shows for that same audience, who laughed in all the “wrong” places as a cast that included Hollywood B-movie denizens Dave “Tex” O’Brien, Dorothy Short, Joe Forte, and future John Ford stock company member Carleton Young stumbled through this over-the-top, ludicrous drama. It was often shown in tandem with other exploitation pictures, as well as paired off with the Beatles feature Yellow Submarine, and hit such august locales as Harvard and Yale, places Esper never would have thought to have shown the movie in the 1930s. The only problem was that Esper wasn’t making the money, someone else was, and he discovered that, having failed to protect the movie’s copyright, he had no recourse in the courts and no way to stop his rivals or make a claim against their earnings. Esper never saw any money from the 1960s/1970s revival of Reefer Madness, but it did restore his name before the public (albeit a public often too stoned or swept up in fits of laughter from the film to appreciate it) at a point when he had otherwise been long forgotten. In the years since, his film Maniac (1934) has found an audience, and both the latter and Reefer Madness have found a newer life still on DVD.

“Harry the Henchman” usually portrayed thugs and henchman to the main villain.

Cording was born on April 26, 1891 in Wellington, Somerset. He was educated in England.

At some point, Cording permanently settled in Los Angeles, California to America and began a film career. Cording’s first role was as a henchmen in 1925’s The Knockout, similar roles followed for the next few years.

Cording’s most notable roles were probably as a minor villain in Errol Flynn’s The Adventures of Robin Hood and as Thamal, the hulking henchman to Bela Lugosi’s character in 1934’s The Black Cat. As a contract player at Universal in the 1940s, he turned up in tiny parts in many of their horror films, such as The Wolf Man, and also appeared in 8 of the Universal Studios Basil Rathbone/Sherlock Holmes films. In the classic 1938 A Christmas Carol he can be seen briefly in an uncredited role (like many of his parts) as a waiter to Ebenezer Scrooge. Cording also appeared in Demetrius and the Gladiators which was a sequel to 20th Century Fox‘s biblcial epic The Robe. Two years before his death, he was appropriately cast as the rough–looking Ed the Blacksmith in Ma and Pa Kettle at the Fair.

Cording died on September 1, 1954. The cause of death was not documented.