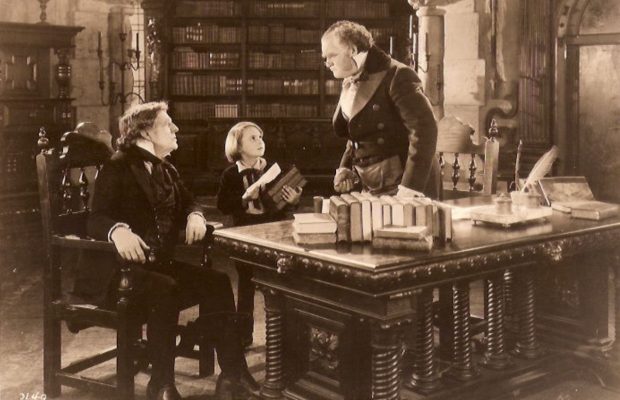 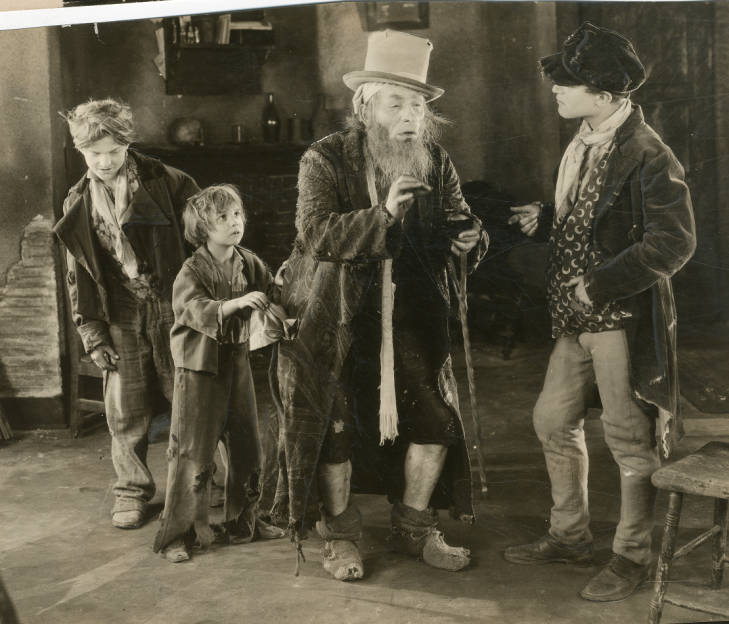 Though he was big star at the time, and gives a fine performance as Fagin, it’s really no surprise that silent screen great Lon Chaney is second-billed in this film. In 1922, eight-year-old JACKIE COOGAN was a much greater attraction than Chaney. The boy was a worldwide phenomenon – the very first movie child star. This film was one of a series of finely crafted Coogan pictures made during the silent era, each of them primarily about the boy and designed to showcase him to best advantage. The child-centric film was a brand new thing then, unheard-of before Coogan came along. It rapidly became the standard template for movies starring children.

There were child stars in various pursuits long before the twentieth century. Talented young performers were lionized in certain circles of urban areas. But that old world degree of stardom was stunningly eclipsed when children became movie stars. Child movie stars could become massively famous, at lightning speed, around the globe. Surprisingly, child stars took a full generation to happen; the “flickers” were over 20 years old before someone thought of casting a child in a starring role. Actors in the earliest silent films were not credited at all – and, since fans found it difficult to identify them, stardom was next to impossible. Though many unknown children appeared in early silents, they seldom played major roles – no movies were “built” around children. But films matured quickly. By 1920, stars such as Mary Pickford and Charlie Chaplin were known and adored on an unprecedented, worldwide scale. After Pickford and Chaplin joined D.W. Griffith and Douglas Fairbanks that year to create United Artists, they also had unprecedented creative power. Chaplin had enormous wealth to work with and absolute control over his productions, and could afford to branch out into new areas. While suffering miserably through a severe creative slump, Chaplin spotted a uniquely talented little boy, John Leslie Coogan Jr., clog dancing alongside his vaudevillian father. The sight of this charming child sparked an explosion of story ideas within Chaplin, and he quickly put young Coogan under contract. They began filming a tale of two outcasts – Chaplin’s Little Tramp and an abandoned child – joining forces. Though industry insiders warned that sentimentality and slapstick could never mix, and thought putting a child in a large role was far too risky, Chaplin had great faith in both The Kid (1921) and in his small co-star. The film was a sensation, a huge international hit that brought a new maturity and depth to film comedy. For better or worse, The Kid also made screen newcomer Jackie Coogan one of the biggest stars on earth. The remarkable ups and downs of Jackie Coogan would prove worthy of a Dickens novel. The boy’s ensuing life story was fraught with intense drama, extreme triumphs and devastating lows, yet he would persevere and come through it all with dignity and a positive outlook.

Coogan holds a unique record. He was – and remains – the youngest self-made millionaire in history. Throughout his heyday in the silents, he worked constantly and money poured into the Coogan household. He was a very talented performer, his films were well made, and he was immensely popular. The films he made in his childhood all earned enormous profits. In addition to his studio salary, the boy was also one of the first stars to be heavily merchandised. Coogan collectables included peanut butter, books, stationery, whistles, dolls and figurines.

As he matured and the silent era passed, Jackie’s popularity inevitably slipped, but he kept on working whenever he could. By 1935, when he turned 21, Jackie had earned over four million dollars. But 1935 was a horrible year for Coogan. He lost his two closest companions in close succession, first when his long-time girlfriend, ace chorus girl Toby Wing, broke up with him. Soon after, Jackie was the sole survivor of a terrible car accident in which he lost his father, Jack Coogan Sr., and best friend, 19-year-old actor Junior Durkin. Young Durkin died at the scene, and Coogan Sr., who had been driving, died hours later in hospital. Jackie was also badly injured, but pulled through. He later called it the single saddest day of his life.

The loss of his father was even more devastating than he knew. Coogan’s mother rapidly remarried, and she and his stepfather soon squandered the fortune Jackie had earned. After he turned 21, his mother refused to give him any of his money, bluntly stating, “No promises were ever made to give Jackie anything. Every dollar a kid earns before he is 21 belongs to his parents. Jackie will not get a cent of his earnings.” During the difficult 3-year period when he was dealing with this situation, Jackie married hard-working starlet Betty Grable. He sued his mother and stepfather, but by then most of the money was long gone. His marriage to Grable foundered under the strain of the court case, the avalanche of unwanted publicity and the couple’s ongoing poverty. His famous legal battle had one good effect: it brought public attention to the unregulated plight of child actors. The result was the California Child Actor’s Bill – more commonly called the Coogan Act – which requires a child’s employer to set aside 15% of their earnings in a trust, and also finally codified important issues such as work hours, schooling and time off. But it was too late to do Coogan much good. He was awarded half of his remaining fortune – $126,000 – in 1939. Though Jackie did his best to reconcile with his mother and stepfather after the lawsuit, things could never be the same. Later, Coogan’s sage advice to future child stars was to “Stay away from mothers.”

Jackie’s adult career was often a struggle, but he persevered. As a young man, he made no secret of his premature baldness, and concentrated on looking for character parts. He served as a pilot in World War II, in the China-India-Burma theatre. Though he never stopped working in films and on TV, and gave many excellent performances, Hollywood is an inherently cruel place; Jackie was long considered more a “has-been” than a star. In 1964, when Coogan was fifty years old and close to broke, that finally changed. He was cast in TV’s offbeat comedy hit The Addams Family, playing merry, light-bulb-lighting ghoul Uncle Fester. His vivid, loveable characterization restored Coogan to stardom, and he gained a new generation of fans who had never even heard of his silent movies. For the rest of his life, he never lacked work.

Coogan’s proudest moment came in 1972. Charlie Chaplin returned to the United States after two decades of exile, to receive the Handel Medallion in New York City and a special Lifetime Achievement Oscar in Hollywood. Jackie Coogan was one of many people on hand to greet Chaplin when he arrived at the airport. Chaplin recognized his old co-star immediately. After greeting the other members of the party with polite handshakes, Chaplin warmly embraced Coogan, tearing up and saying, “You know, I think I would rather see you than anybody else.” Chaplin later made a point of taking Coogan’s wife aside in private and telling her, “You must never forget that your husband is a genius.”

Jackie Coogan died of a heart attack in 1984, at 69. In 2003, a biography Jackie Coogan: The World’s Boy King: A Biography of Hollywood’s Legendary Child Star was published. Its author, Diana Serra Cary, is one of the very few people who can truly understand what Jackie went though, both in Hollywood and later in life. In the 1920s, Diana Serra Cary was his female contemporary, the child star Baby Peggy.