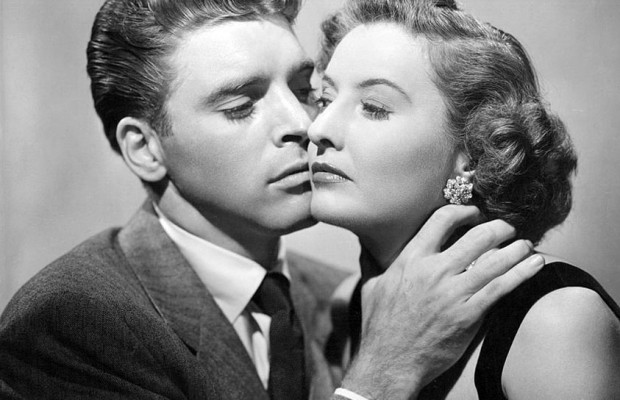 “Sorry, Wrong Number” is a real chiller.  Based on the w.k. radio drama of same title, picture is a top entry for the horror field.  It should rate a handsome boxoffice return.  The basic suspense of the ether show has been enlarged for sight values in the filming, and payoff reaps a load of spine-tingling menace.

Film is a fancily dressed co-production by Hal B. Wallis and Anatole Litvak.  Pair has smoothly coordinated efforts to give strong backing to the Lucille Fletcher script, based on her

Plot familiar to most radio listeners, deals with an invalid femme who overhears a murder scheme through crossed telephone lines.  Alone in her home, the invalid tries to trace the call.  She fails, and then tries to convince the police of the danger.  She gradually comes to realize that it is her own death that is planned and tension mounts to the ruthless, deadly scene where the murderer does his job.

Characters have been more roundly developed for filming because of the screen’s greater flexibility and players realize perfectly on their assignments. What makes the characters tick is built up through flashbacks that detail motives and sharpen more suspenseful moments.

Barbara Stanwyck plays her role of the invalid almost entirely in bed.  Her reading is sock, the actress giving an interpretation that makes the neurotic, selfish woman understandable.  Same touch is used by Burt Lancaster to make audiences see through the role of the invalid’s husband and how he came to plot her death.  Both are very able.

Begley, the invalid’s father; Leif Erickson and William Conrad.  Some are seen only in bits and lend validity to the story.

Considerable emphasis is laced on the score by Franz Waxman, music being used to heighten and highlight the gradually mounting suspense.  Sol Polito uses an extremely mobile camera for the same effect sharpening the building terror with unusual angles and lighting.  Warren Low’s capable editing holds the picture to a tight 89 minutes.

SORRY, WRONG NUMBER, screen play by Lucille Fletcher, based on her radio drama of the same title; directed by Anatole Litvak and produced by r. Litvak and Hal Wallis for Paramount.  At the Paramount Theatre.

The moral of “Sorry, Wrong Number,” which came to the Paramount yesterday, is that you should never leave a woman alone in a house with a telephone, especially if the woman is a nervous, excitable type. For, according to this demonstration, she can drive herself stark staring mad by an excessive utilization of that innocent little machine. And the impulse to reckless telephoning may be just too hard to overcome—especially if one gets the notion that one’s husband has an urge to do one in.

Hand it to Lucille Fletcher, who wrote this picture’s script from her own popular radio drama, played many times, we are told: she has certainly conceived an unusual device for unfolding a plot. For she’s fixed it so Barbara Stanwyck, as a selfish, suspicious dame, lying alone on the top floor of a fancy town-house in Sutton Place, can glean for herself all the details, plus the background, of a complicated plan to bring about her own destruction—without once going out of the room.

The gimmick, of course, is the telephone, which has long been the playwright’s best friend—but never, to our recollection, as exploited a one as it is here. From the moment that

languishing Miss Stanwyck happens to get a crossed wire trying to call her husband and hears a murder being planned, she keeps the wires hot and busy, anxiously pleading for aid. Then her cold fear increases as more startling revelations reach her ears, exposed to the eavesdropping audience in illustrative flashbacks and such. And finally her terror is titanic—and she has run up some telephone bill—when she has got the conclusive information that she is going to be bumped off.

As a sheer exercise in melodrama and in cumulative suspense, this film has some highly vivid episodes and a grimly exciting final reel. Anatole Litvak, the director, has whipped it up hotly toward the end. And it also has some rather novel implications of a neurotic twist, this one involving the complex of a father-daughter relationship. But the narrative structure of the story and the involuted way in which it is told, with flashbacks occurring within flashbacks and extraneities popping here and there, cause it to be quite bewildering and therefore tedious in the lengthy middle phase.

Also the fact that coincidence plays almost as big a part in the story as does Miss Stanwyck weakens its credibility. Not only is it unlikely that a lady could learn so much from so many

random people in such a short space of time, but it somehow seems just a bit far-fetched that the telephone company would oblige with so many technical mix-ups and exceptions just to forward a plot. An expert in phone communications has just reported to us that the representations of “hello girls” are “atrocious” and “insulting,” too.

As the ear-bending lady, however, Miss Stanwyck does a quite elaborate job of working herself into a frenzy, as well as playing a nasty dame in the previous and self-aggrandizing phases of her life. And a painfully obtuse performance as her stubborn and frustrated spouse who is driven to criminal extremities is given by Burt Lancaster. Ed Begley is uncouth as her father, Ann Richards is prim as a school friend and Harold Vermilyea, Wendell Corey and William Conrad are intriguing in lesser roles.

Perhaps if you have a special interest in foul folks and morbidities, you will thrill to this Hal Wallis picture. Frankly, we squirmed—and not from dread.